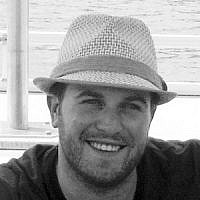 The Blogs
Royi Gutkin
Apply for a Blog
Please note that the posts on The Blogs are contributed by third parties. The opinions, facts and any media content in them are presented solely by the authors, and neither The Times of Israel nor its partners assume any responsibility for them. Please contact us in case of abuse. In case of abuse,
Report this post.

First of all, congratulations on an impressive election result – winning more seats than any single party since 2003. Although I have serious concerns over some comments you made in the final days of the campaign, they are not the main issue of this letter. I do hope that you will use the coming weeks and months to repair the reputational damage and internal conflicts that arose from the election and move towards a more inclusive government for all Israeli citizens, be they Jews, Muslims, Christians or others, and treating immigrants from Ethiopia the same way as we treat immigrants from Europe, the US and elsewhere.

Now to the main issue of my letter – the allocation of various Israeli Government Ministries to Likud Members of Knesset (MKs) and various coalition partners. This is not an analysis or critique of the coalition system, Israel’s PR election machine or the partners you have chosen to build a government with. (Although I do have plenty concerns about all of the above.)

Rather, this is a desperate plea from Diaspora Jewry not to ignore or continue the tragic underinvestment in the Foreign Ministry and the invaluable work of Israeli Embassies, Ambassadors and Diplomats that represent Israel all over the world.

Israel faces a range of threats and challenges; from regional security to economic disparity, housing and employment to national identity, among many others. Thankfully, some, if not most of these issues will be taken on by various Government Ministers who will do their best to address them all. However, there is one area that has been seemingly ignored, underinvested and underutilised for too long and I beseech you take this on as a key goal of your government, as it leads the twentieth Knesset.

I am of course describing the Ministry of Foreign Affairs (aka the Foreign Ministry).

Long gone are the days of Abba Eban and the ‘Voice of Israel’. Relegated to almost mythical history of the ‘early days’ of the state, the Eban’s Foreign Ministry represented a besieged Israel’s early requirement for international recognition and defence relationships, surrounded by enemies and desperate for peace. Golda Meir had the ability to relate to Diaspora communities and connect with global leaders while embodying the Israeli spirit of innovation, social responsibility and technological expertise. This era of effective communicators seems to be over.

In recent years, the Foreign Ministry has been held by Avigdor Lieberman, who has used the position to further his own views and ideologies, going so far in 2010 as to announce policies at the UN that were not cleared by the Prime Minister and did not represent the Israeli Government. Lieberman has done a terrible job at improving (or not even trying to improve) Israel’s image globally and we have seen a clear deterioration in relations with the US, Europe, most BRIC countries (Brazil, Russia, India, China & South America) and almost no change in relations with potential Muslim and Arab nations in the region at a time when we could have made huge breakthroughs in response to Iranian, ISIS and other regional instabilities in recent years. The relationship with South Africa has become a particularly tragic case due the insistence of the ruling ANC that Israel has been practicing its own version of apartheid – a painful use of words from those who suffered real discrimination for so many years.

Last year, Foreign Ministry employees around the world even felt the need to go on strike over basic issues such as pay and employment conditions. This strike lasted several weeks and had a hugely disastrous affect on the fantastic work being done in about 100 countries with Israeli Embassies, Consulates or ‘Special Missions’. This does not even include the other 61 countries that recognise Israel but do not have a permanent representative living there.

Israel spends a mere 0.15 percent of GDP on the Foreign Ministry budget (according to TOI’s Elhanan Miller, January 2013), whereas other developed countries spend much more, both proportionally and in real terms. The UK spends 0.75% of GDP and Germany spends 0.4%.

So Bibi, my plea is twofold.

First and foremost, stop being so stingy on what we all know is Israel first line of defence in the world of diplomacy and, in most cases, Israel’s only representatives in countries and territories that have few positive voices for Israel and simply follow a narrative that is harmful and incorrect. Ambassadors and diplomatic staff deserve higher salaries and better packages than they currently receive. Only this way can we ensure that the best, brightest, most able and experienced team is out there representing Israel’s interests all over the world.

Secondly, please put political bargaining aside and appoint a Foreign Minister who will do the job well. I was delighted at reports of Michael Oren being appointed as Deputy FM last week and thought it would be too much to hope that he would be given the top job. Michael is someone who understands the power of diplomacy and the immensely important relationship that Israel needs to create, maintain and develop in both friendly and not-so-friendly countries.

Saving this ministerial position for potential coalition partners like Bougi (Zionist Union/Labour leader Isaac Herzog) would be a disaster. He simply does not have the skills required for this role; he is not energetic, charming, warm and friendly, nor does he speak with any flair or excitement.

An equally stupid decision would be hog this ministry for yourself. As Prime Minister, you have not the time, energy, finesse or desire to devote yourself as fully to the Foreign Ministry as the role requires. You should be busy enough running the country to appoint a skilled diplomat, who can speak to the world on Israel’s behalf.

So please, give the Foreign Ministry the funds and the leader that it needs to do its job properly. And if you’re stuck for anyone to appoint – I’m always available.

About the Author
Born in Israel (in a taxi!), and moved to London aged 5. Royi's previous Jewish/Israel education includes participating as a teenager in Bnei Akiva, University (JSoc President), on his Israel Gap Year Programme and since then in his professional life, working for United Synagogue, UJIA, Birthright, Jewish Agency for Israel and currently working at the Zionist Federation UK. In Royi's spare time he does video editing for weddings, corporate and private events.
Related Topics
Related Posts
Comments