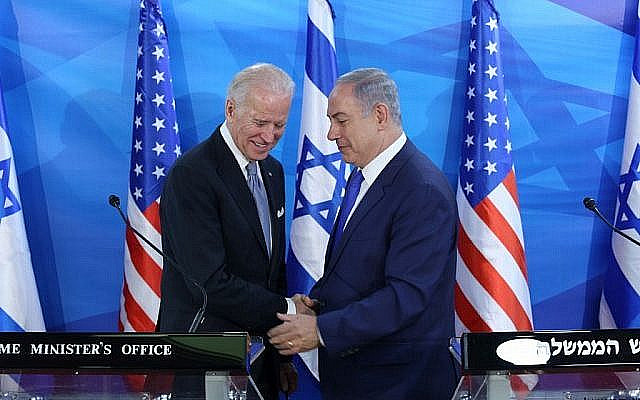 As if Joe Biden’s life were not complicated enough, providence has saddled him with a critical role in determining Israel’s course. The presumptive Democratic nominee for president is the person best placed to dissuade the government from a reckless annexation gamble in the West Bank.

Normally countries try to be circumspect about influencing each other, and that is as it should be. Politicians who have not yet been elected need to be especially cautious lest they undermine their own chances by projecting undue confidence and appearing to interfere with the current government of their land. Donald Trump might find it inappropriate.

But these are extraordinary circumstances in which the incumbent, Trump, is the one goading Israel into annexation – while the Israeli opposition has joined the government under cover of the corona crisis and seems powerless to prevent a move it certainly considers most unwise.

I appreciate the strategic value of the West Bank, without which Israel is vulnerably narrow. And the Gaza precedent does raise concerns about the Palestinian Authority’s ability to keep Hamas militants at bay without the close assistance of Israel. But while partition is dangerous, it is less bad than ending up with an equally balanced binational state which may try to deny a third of its residents voting rights. That’s a recipe for civil war.

Furthermore, though I do favor renewing negotiations, they may well not succeed. The Palestinians mishandled reasonable statehood offers in 2001 and 2008. With weak leadership beset by hardliners and fundamentalists, in the thrall of their own steadfastness, paralyzed by a victim complex, the Palestinians are not likely to save Israel from itself with an irresistible explosion of flexibility. Far from it: they have the patience to wait out Israel’s foolishness.

As a young political reporter I wrote in the Jerusalem Post 32 years ago that while Israel needed to partition the Holy Land out of demographic self-interest, a negotiated deal was unlikely because even the most dovish Israeli government would fail to meet minimal Palestinian demands for the formal “end of conflict” Israelis seek. I was inexperienced then, but I could see that demographic confidence (combined with bitterness over the fact that the 1949 armistice lines already cost them three quarters of the land) would make the Palestinians maximalist. Subsequent events suggest experience is overrated.

My suggestion then was unilateral action – but not of the kind Benjamin Netanyahu has in mind.

Then as now, I argued that it is logical for Israel to neutralize the Palestinians’ demographic leverage by handing over certain areas in a way that yields a contiguous entity free of settlers; Israel could keep the rest in escrow, negotiating from a position of greater advantage whenever a critical mass of Palestinians decided they want a deal.

Instead of acting with that kind of strategic generosity, Israel is about to throw a lit match into a bucket of gasoline.

Some in the more pragmatic right would suffice with a symbolic grab, perhaps in Gush Etzion. Others covet the Jordan Valley, which being large and largely unpopulated would have appeal to centrist Israelis were it not for the mayhem it would cause with Jordan. And some want all the settlements (creating one of history’s most preposterous, gerrymandered, and indefensible border).

That latter scenario seems to be the one the Trump “plan” permits.The closer one gets to the it, the greater the risk.

There is serious risk of a new Palestinian uprising, which Israelis would deeply regret; Mahmoud Abbas’  threats to end the security collaboration which is critical to Israel is the beginning. Down that road one can already make out a collapse of the Palestinian authority,  suspension of the Jordan peace treaty, a halt to normalization with other Sunni nations, and sanctions against and isolation of Israel. Violence could also easily spill over into other countries. That’s why almost the entire security establishment opposes unilateral annexation, as do hawkish friends of Israel like US historian-activist Daniel Pipes.

What would be the benefit of such a move? Well, one could say that at this point it’s silly to pretend the settlements are not part of Israel, so this formalizes something that anyway exists, and so qualifies as honesty and good order.

But Israel finds ways to make the status quo work while keeping hopes for peace and partition somewhat alive, which qualifies as sane. No one actually needs to die to grant Netanyahu this legacy, the attainment of which is almost certainly his goal.

Why would Benny Gantz agree to such idiocy? Possibly he fears the handful of right-wingers in his own caucus would vote for annexation anyway, making him look foolish. Also, for him to fight annexation too robustly would give Netanyahu an excuse to cancel the rotation theoretically planned for 18 months from now. After being tarred and feathered by his side for his coalition capitulation, that would really make him look foolish.

Mainly he has probably just accepted that Israelis are too mesmerized by the prospect of American “permission” to make this go away. And the public will surely mostly go along, at least until things start blowing up again.

As November approaches the green light from Washington will get brighter: Trump can’t win reelection without the Evangelicals mobilizing for him and annexation is an excellent way to please them; it aligns with their apocalyptic biblical prophesies.

The damage Trump stands to deliver to Israel might be the longest-lasting of his various planetary calamities. It has potential to destroy the country as a Jewish state.

Israel’s opposition is enfeebled; the Europeans are unlikely to act quickly and ignoring them is anyway a sport in Israel; Netanyahu will not heed warnings from the Palestinians no matter what, and the Arab world wallows in decay and disarray. The Titanic has set sail.

His leverage is a function of the polls. If he stays well ahead he could probably scuttle annexation altogether by making it crystal clear that if elected he would demand it be reversed – and put muscle and powerful threats behind his words. There are less dramatic scenarios which he has already started by expressing his theoretical opposition.

Normally societies don’t welcome outside pressure. But these are not normal times, and the world has become too interconnected for this nicety to really stand as principle. Indeed, many Israelis would welcome it mightily despite the howls from the right. There is a high correlation between these Israelis and the ones who know the map and the math.

A strong position from Biden would deepen the conflict between Likud and the US Democrats, and certainly amount to a gamble by the nominee. Most US Jews, leaning liberal and unimpressed by Israeli ultra-nationalism, would back him — but he could suffer among some Jewish voters in a way that could undermine him in the crucial swing state of Florida.

Does he care about saving Israel? In the bizarre battleground of US politics, that’s actually a possibility.

The whole thing may swing on what the Jewish leadership (and donorship) wants. Biden would be wise to consult with them. He may discover that they are as eager to save Israel from itself (and from Trump) as the Israeli intelligentsia and establishment are.

Tara Reade’s sexual assault allegations, true or not, undermine Biden’s ability to cast himself the anti-Trump on decency, absurd as that may be. But Israel has unwittingly offered him another way be the anti-Trump: the adult in the room of world affairs.