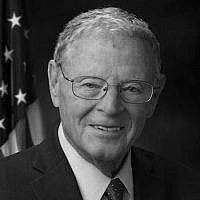 The Blogs
Jim Inhofe
Apply for a Blog
Advertisement
Please note that the posts on The Blogs are contributed by third parties. The opinions, facts and any media content in them are presented solely by the authors, and neither The Times of Israel nor its partners assume any responsibility for them. Please contact us in case of abuse. In case of abuse,
Report this post. 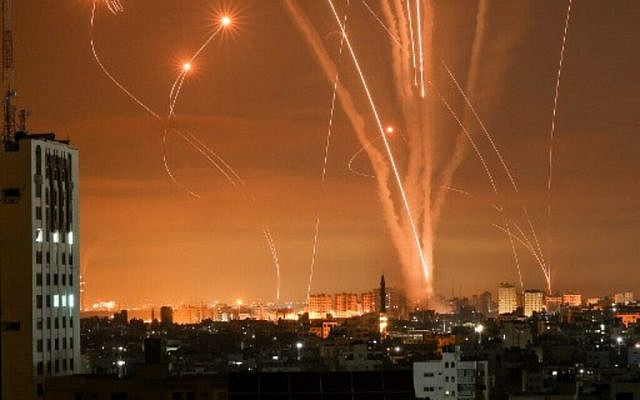 Rockets light up the night sky as they are fired towards Israel from Beit Lahia in the northern Gaza Strip on May 14, 2021. Israel bombarded Gaza with artillery and air strikes on May 14, in response to a new barrage of rocket fire from the Hamas-run enclave. (MOHAMMED ABED / AFP)

Last month, the Palestinian terrorist group Hamas incited a deadly conflict using little more than a Jerusalem property dispute as pretext. During an 11-day war started by Hamas and its allies, terrorists fired more than 4,300 rockets at Israel from Palestinian population centers in Gaza, endangering millions of Palestinian and Israeli civilians alike. Approximately 680 – over 15 percent – of those rockets didn’t even reach Israel, and instead fell on Palestinian men, women, and children. Hundreds were killed in Hamas’s war of choice. Then, after Egypt brokered a ceasefire to end the war, Hamas’s leader thanked Iran for supplying weapons.

The United States must now ensure that Hamas’s murderous terrorism, facilitated by Iran, is not rewarded. Unfortunately, the Biden administration appears to be moving in the opposite direction: The administration is poised to restore aid to the West Bank and Gaza, and diplomatic privileges to the Palestinian leadership, without any conditions whatsoever.

This process began two months ago, before Hamas’s latest round of attacks began. In early April, the administration announced plans to send $75 million in economic and development assistance to the West Bank and Gaza. The aid package appears designed to skirt the 2018 Taylor Force Act. This bipartisan, commonsense legislation makes it clear that the US cannot legally provide economic aid to the Palestinian Authority (PA) until it ends its financial rewards for terrorists and their families. The PA still has not done this.

At the same time, the administration announced $150 million in humanitarian assistance for the United Nations Relief and Works Agency (UNRWA). UNRWA is a notoriously corrupt organization: Hamas has stored rockets at UNRWA schools; UNRWA educational curricula promote terrorism against Israel; and it has been plagued by mismanagement for years. This is why President Trump ended aid to UNRWA in 2018. However, that aid is now resuming, without any concrete plans for reforming UNRWA – ideologically or bureaucratically – whatsoever.

The administration is also moving to upgrade its diplomatic ties with Palestinian leadership – again, without any conditions. Secretary of State Antony Blinken recently announced that the US consulate in Jerusalem, which previously served as the de facto US mission to the Palestinian leadership, would soon reopen. But since President Trump moved the US embassy to Jerusalem, there is no need for a separate consulate. By reversing President Trump’s policy, the Biden administration is affording the Palestinian leadership a level of legitimacy and presumed responsibility directly contradicted by the latest Hamas-initiated war.

What’s more, the Biden administration is reportedly seeking to reopen the Palestine Liberation Organization’s (PLO) mission in Washington, which President Trump shut down in 2018. Again, what has the Palestinian leadership done to merit this status?

I’m going to work with my colleagues in Congress to stop the Biden administration’s money-for-nothing policy towards the Palestinian leadership. After all, it is not Washington’s responsibility to rebuild what Hamas allowed to be destroyed. It also isn’t Washington’s responsibility to restore diplomatic privileges to a Palestinian leadership that repeatedly rejects diplomacy. American aid is meant to further American interests — not to enrich those who attack America’s friends.

Congress should affirm its support for our closest ally in the Middle East by helping Israel restore its Iron Dome capacity, which is vital to ensuring that any future Gaza war will be just as hopeless for Hamas as this last one was. That is the best strategy for deterring future conflict and saving innocent lives.