The Blogs
Eric Leskly
Apply for a Blog
Advertisement
Please note that the posts on The Blogs are contributed by third parties. The opinions, facts and any media content in them are presented solely by the authors, and neither The Times of Israel nor its partners assume any responsibility for them. Please contact us in case of abuse. In case of abuse,
Report this post. 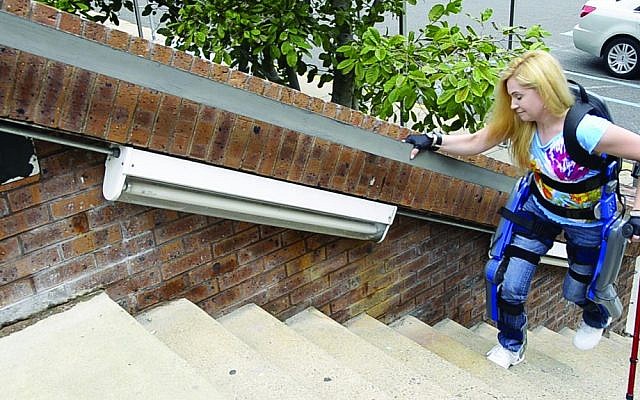 The ReWalk system in use (illustration courtesy Argo Medical Systems)

David Ben Gurion once famously remarked that to be a realist in Israel, one has to believe in miracles. The statement captures so much about the country and its people. Israelis tend to be practical-minded, and generally accept things as they are. Maybe it is a consequence of the regional realities Israel faces. For better or worse, life in Tel Aviv does not skip a beat when rockets are fired 30 miles to the south (roughly the distance from Los Angeles to Long Beach, and half the distance from New York to the Hamptons). Syria and Iraq may be engulfed in civil war, but most Israelis I know pay more attention to upsets in the World Cup. After all, who could guess that Spain would be first to get knocked out?

Taking things as they are — and expressing them bluntly — is a defining characteristic of Israeli culture. Modern Hebrew has multiple ways of saying “that’s the way it is.” There’s not much else to be done. Some visitors find Israeli brusqueness refreshing, others think it rude, but everyone takes note of it. Little attempt is made to sugarcoat anything: that’s the way it is, so deal with it. Like your new hairstyle? Think you’ve lost some weight? Forget the scale. Fly to Israel and your friends will be sure to let you know (and won’t take pity if you’ve gained some either). “We have no concept of ‘understatement’,” an Israeli colleague once pointed out to me, “it doesn’t translate here.” That’s the way it is, and that’s that.

But in spite of this, one of the most unique and impressive Israeli traits is the ability to find creative, innovative – and at times, seemingly impossible – solutions to problems. Israel has been breaking through and going “outside the box” almost since its inception, long before the term became common parlance in boardrooms and business schools worldwide.

In the past, military affairs were the main proving grounds of this phenomenon. Breaking the blockade through the Burma Road. Flying a MIG from Iraq to Israel. Destroying the Egyptian Air Force on the ground in the opening salvo of the Six Day War. Ein Tebbe and Eli Cohen. Even the rebirth of the State at all in 1948. If these are not the miracles that Ben Gurion described, they come strikingly close when understood in context.

Over the last two decades, the technology sector has supplanted national security as the public stage for Israel’s innovative edge. Israel’s success as Start-Up Nation has already been well-chronicled, its statistics already well-known. Israeli entrepreneurs have given the world planes without pilots, cameras that can be swallowed, solar windows and instant messaging. Israel now has the most effective water desalination program on earth, and is now advising California on its chronic water shortage. Even the cherry tomato had its origins in this small strip of the Levant.

“High tech” is also not quite a miracle – more the synthesis of smart government policies, a surplus of human capital, the lack of natural resources, and a culture that looks favorably on risk-taking — but it is proof that the boundaries of what is possible in Israel seem able to be further stretched than in other parts of the world.

Last week I had the privilege of bearing witness to another spectacular achievement of Israeli innovation, a more human and personal tale than the storied company IPOs and acquisitions which make the business headlines in Israel and abroad. I watched as my friend, Marine Corps Captain Derek Herrera, who was paralyzed after being shot in Afghanistan, got out of his wheelchair and walked by using ReWalk, a biomechanical exoskeleton developed in Israel.

ReWalk is a wearable, motor-driven robotic system worn as an exoskeleton. The device detects shifts from a user’s balance, and interprets these into movement, causing the legs to walk in a natural gait. ReWalk was developed by Dr. Amit Goffer, a Technion graduate and himself a quadriplegic. Time Magazine named ReWalk one of the top 25 inventions of 2013 (Derek is pictured). Derek is currently the first US military veteran and the first person in California to have ReWalk.

I had come across ReWalk passively before I met Derek. Several years ago, while working at a startup in Israel, a coworker sent me an email with the subject “More Amazing Stuff out of Technion!!” and a link showing the device. I watched, and it seemed amazing. But like anything else, it is one thing to see “someone else” using it online, and another to see it up close, and helping your friend.

At a Technion event in Los Angeles featuring Derek, the audience was moved beyond words as he described that day in Afghanistan. Learning that he was shot on an ambush during his third tour of duty, after volunteering for Marine Special Operation Forces, the Corps’ most elite (and most dangerous) arm. How he realized that he was paralyzed almost immediately upon being shot, but still managed to operate the radio and call in for backup support. Hearing him speak of his concern, not for himself, but for Rick, the Marine Sergeant under his command who was shot through the neck (he later survived, against all odds). And the phone conversation with his wife, where he told her what had happened.

And listening to Derek’s concern for the doctors at the trauma center where he was treated, realizing that they were the perpetual bearers of bad news to others like him who had their lives turned upside down, in just a matter of seconds. “That’s a tough job,” Derek said matter-of-factly.

A few minutes later, he stood up – via ReWalk – and you could hear a drop before the concomitant wave of applause followed. “You are the most remarkable person I have ever met in my life” a 96 year old woman told Derek, standing at his true height of 6’2”, now the tallest person in the room.

ReWalk is a brilliant engineering feat – yet it is not a miracle. Mastering the device requires considerable dedication, training and physical strength. But Derek is more than up for the challenge. On his YouTube page, you can watch him practicing with the device…

…and later doing pull-ups with the exoskeleton on his body!

Given that the default for paraplegics prior to the advent of ReWalk was life confined to a wheelchair, it is a giant step, quite literally, for Israeli innovation.

Inventions like ReWalk represent the best of what Israel can offer the world in the 21st Century, and if this is the technology in its early stage, we can only imagine where it might end. After all, Ben Gurion did not say that miracles were necessary – only that it was necessary to still believe in them.

About the Author
Eric Leskly is CEO of STS Corporation, a defense contracting firm in Los Angeles. He spent several years working in technology and finance in Israel.
Related Topics
Related Posts
Comments