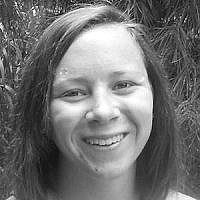 The Blogs
Jessica Sarah Herrmann
Apply for a Blog
Advertisement
Please note that the posts on The Blogs are contributed by third parties. The opinions, facts and any media content in them are presented solely by the authors, and neither The Times of Israel nor its partners assume any responsibility for them. Please contact us in case of abuse. In case of abuse,
Report this post.

177484 read the numbers unforgivingly stained against the warmth of my grandfather’s skin. Being the grandchild of an Auschwitz survivor, you do not hear blissful stories of childhood. Their tales are filled with cattle cars, bloodstained streets, and discrimination. Though I annually pledged “Never Again” on Holocaust Remembrance Day, the images of genocide my grandfather vividly detailed were merely distant points on my family’s timeline, void of any real emotional connection.

I have used that same introduction time and time again in personal statements for university, internship interviews, and even the motivation for my application to Birthright. In truth, it was not until this past December that I heard the entire story of my Poppy’s childhood. My Poppy took part in the USC Shoah Foundation’s Visual History Archive by giving a testimony of his experience. Growing up, I knew that my Poppy was a Holocaust survivor; but I never knew what that meant beyond the numbers tattooed on his arm as he hugged me goodnight. I would hear pieces of his story here and there from my sister, cousins, parents, and even my Poppy himself, but they would spare me the horrible details. I was constantly told that I was too young to watch Poppy’s Holocaust videos, and I would have to just wait until I was older. Well, when I was older, taking college courses and becoming heavily involved in extracurricular activities, I never seemed to be able to find the time to sit down to watch a 3 hours 16 minutes and 25 seconds video.

During finals week this past December, I found myself sitting in the library on a Saturday around midnight with no more focus or drive to keep studying. I am not sure if I just wanted to procrastinate studying, if I wanted to find a way to stay up until 3am to watch the meteor shower, the fact that I would be leaving for Birthright in a few days, or a combination of all three– but at that moment I decided to watch my Poppy’s story.

A few days later, boarding the plane to Israel clips of my Poppy’s testimony replayed in my head, and continued to do so for the next ten days. However, instead of focusing on the atrocities my Poppy faced, I became fixated on the end of his interview when he spoke of his hopes for the future. His words echoed in my mind as I walked on the ground of Israel for the first time, I can’t wait to send my grandchildren on a trip to Israel because everyone has to see it. I know that wherever my Poppy is now, he was with me in that moment.

The highlight of my time in Israel was my second Shabbat. But it was not the morning that we spend exploring Jerusalem or my visit to the Kotel that moved me. It was that evening at the hotel in Zichron Yaakov that was the most powerful part of my Birthright experience.

There was a group of about six girls, myself included, who wanted to have a Kabbalat Shabbat service. We sat behind the table holding the Shabbat candles in the middle of the hotel and we began our service. We all sang at the top of our lungs, taught each other our favorite tunes and hand motions, and had a discussion. That night I was able to embrace the true meaning of Shabbat: friendship, family, and celebrating the joy of being alive. To help put this experience in prospective, we got a visit from an Australian father of two. He came up to us and asked about Birthright. He wanted to know if Birthright was really a 10-day free trip to Israel, where young people party. The nachas that I had in our group was out of this world when we relpied, “Well the majority of our group is partying right now, but we are here praying!”

During this Shabbat service the clip of my Poppy talking about his Bar Mitzvah played in my head. He became a Bar Mitzvah in December 1938 once his family had moved to France from Germany. He talked about how they had to use a random room in his house since there was no synagogue, but it was nice under the circumstances. There are countless stories of how my grandfather was able to keep his faith throughout the war. For example, he used walnut shells to make a menorah inside of the concentration camp one cold Hanukah evening. My Poppy said that his faith helped him to survive; his message to future generations was to keep up faith in Judaism no matter the circumstances. Sitting on the floor of the hotel lost in a whirlpool of emotions, I knew that my Poppy’s message had been heard.

A day earlier I had visited Mt. Herzl and Yad Vashem. Standing next to the graves of fallen IDF soldiers and hearing their stories being shared by their peers was a moving experience. Walking through Yad Vashem, the Holocaust Museum, I had expected to have memories of my Poppy running through my head- but to my surprise my thoughts turned to my friend Rob, who lost his battle with cancer two years ago. At first I couldn’t figure out why Rob was on my mind, but it all clicked on the last day as we were driving to the airport and a rainbow reached across the sky.

In Judaism a rainbow is a symbol that a covenant has been made.  In Israel, I was reminded that I had made a covenant with G-d that I would keep the memories of my lost loved ones in my life alive forever. Rob taught me lessons of determination and to never give up through his battle to the very end with cancer. My Poppy taught me the same lessons from his survival of Holocaust, from how he started out as a factory worker to later become the owner of that factory, and his decade long battle with cancer.

I will never be able to forget the harsh details of my Poppy’s time in concentration camps or his face while describing the death march where he lost his brother; but those details will fade in my mind so I can remember what my Poppy wanted people to learn from his experiences. He never personally told me these horrible details, perhaps because it is the lessons of determination that are more important. Participating in Birthright has retaught me those lessons and allowed me to see my Poppy’s message carried out in my generation.