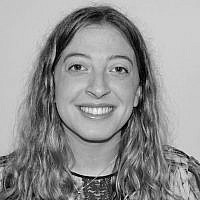 The Blogs
Lauren Keiles
Apply for a Blog
Please note that the posts on The Blogs are contributed by third parties. The opinions, facts and any media content in them are presented solely by the authors, and neither The Times of Israel nor its partners assume any responsibility for them. Please contact us in case of abuse. In case of abuse,
Report this post.

As a young, Jewish, women, with a deep passion to take an active part in our vibrant Jewish community, having the opportunity to become a Deputy for Liberal Judaism was something I was extremely eager to take on.

Being a cheder teacher at both Northwood and Pinner, and York Liberal Jewish Synagogues, on top of being a member of LJY Netzer (The Liberal Jewish Youth Movement), has meant that of my priorities is to represent my communities’ values onto the wider scene of the Jewish community, through the Board of Deputies.

Meeting the inspiring Chief Executive Gillian Merron as well as the other female Vice Presidents on the Board, allowed me to have a much greater idea about the breadth of work the Board of Deputies does and the role that I could play as a young representative.

It was clear from my first meeting, that as a 21-year-old, my experience of the Jewish community was nothing in comparison to the dedicated Deputies who have held their positions on the Board for many years.

However, what also became apparent was that their experiences, perceptions and visions for the Jewish community were certainly not reflective of my own and that this space was suffering from a lack of diversity which can only truly be brought about by the introduction of new voices.

The Board of Deputies is a special place which brings together many Jewish organisations to debate and vote on issues directly and indirectly affecting the Jewish community, in order for our views to be represented nationally and globally.

Without young people running to be Deputies, the system is both unsustainable and un-inclusive. Moreover, the vital representational function of the Board is weakened.

The experience of young Jews is extremely valid and is of equal importance to the more senior members of the community. Neither group can accurately understand, appreciate the others best interest and act on the others’ behalf without everyone having the space to be a part of the discussion.

I believe that it is everyone’s responsibility in the Jewish community to make sure that our Board is representative as this is how we will make sure that our organisation is dynamic, forward thinking, inclusive and developing the communal leaders of the future.