Judaism places significance on the power of speech. The Talmud writes that the universe was created through speech. Noteworthy is that on Yom Kippur, roughly a quarter of the day’s confessions deal with sins committed through speech.

Judaism not only dictates what foods can go in a person’s mouth, but also what words can come out of it. Termed lashon hara, literally evil tongue; this refers to a very broad range of both true or derogatory speech.

In a fascinating and engaging new book False Facts and True Rumors: Lashon HaRa in Contemporary Culture (Maggid Books 978-1592644414), Rabbi Daniel Z. Feldman not only deals with the religious precept of lashon hara, but spends considerable amount of time dealing with its underlying philosophical and psychological issues. 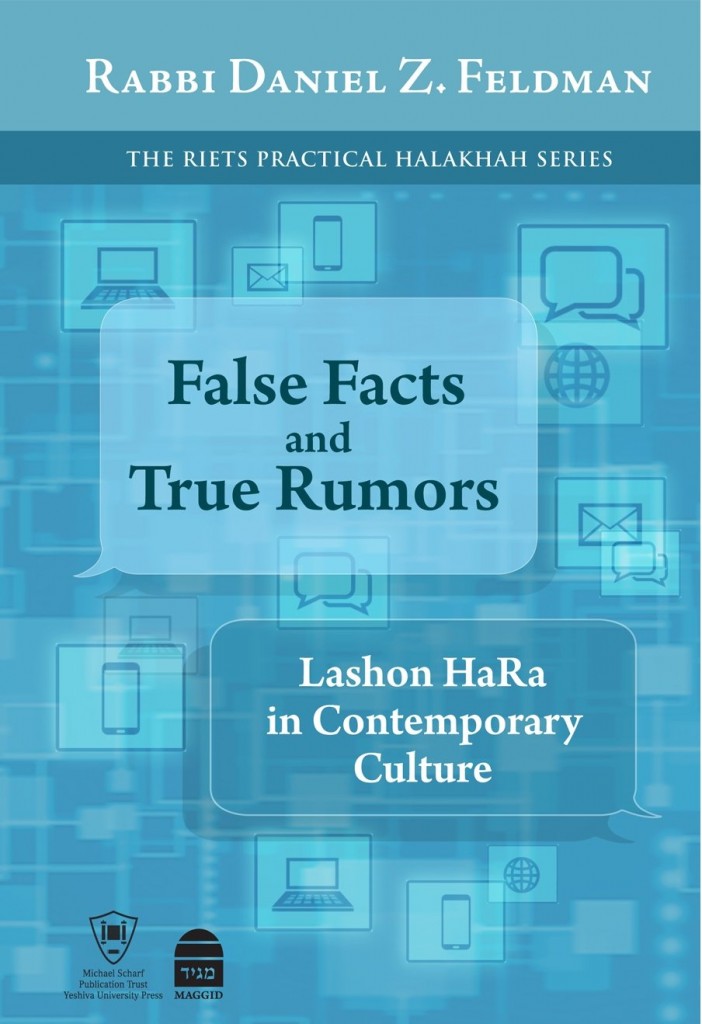 In this important work, Feldman combines his extensive knowledge of talmudic sources, in addition to wide-ranging set of contemporary sources.

Until recently, communications moved slowly. The Internet has changed all that. Today, both facts and gossip can be known to entire populations in seconds which creates significant lashon hara challenges. Feldman deals directly with that and provides cogent answers.

Many books about the topic tend to deal with it primarily from a legal perspective, which for many readers can be a dry tome of do’s and don’ts; while this is a highly engaging read. Feldman shows how the challenge is not just to be a responsible speaker, but how important and challenging it is to be an effective communicator, to ensure what is said is appropriate, relevant and necessary.

The book opens with and is centered on the talmudic story of a peddler. This peddler arrives into town proclaiming, in the style of the day, the wares he had to sell. The peddler announces to all “who wishes to purchase the elixir of life?” As a crowd gathered, the peddler was exhorted to provide the enticing brew he was selling, to which he reaches into his bag. What he revealed was not a potion, but a parchment. He held a text from the Book of Psalms and with great drama read from it “who is the man who desires life, and loves days, that he may see good? Guard your tongue from evil, and your lips from speaking deceitfully. Turn from evil, and do good; seek peace, and pursue it”.

Feldman writes that the deeper message of the peddler is to convey the havoc that gossip wreaks upon life. Not just the here and now, but also the spiritual devastation that is imposed, guilt incurred and damage inflicted upon day-to-day life.

The idea that that a statement could be true, and yet be totally forbidden to share is a profoundly innovative Jewish concept. There are conflicting values that must be dealt with, balancing truth and the need to know; and the desire for confidentiality and privacy. That paradox of balancing what is gossip or slander and when to provide tough love in speech is an incredibly difficult task, requiring the speaker to balance many different, and often conflicting interests.

When a person says something, it’s often based on their memory of the event. Yet for most people, their memories are often unreliable, combined with their overestimation of their ability to convey the truths. Feldman quotes a substantial amount of contemporary neurological and psychological evidence around this. What the Talmud attempts to convey in a brief peddler’s tale, the empirical evidence Feldman details from modern science is overwhelming.

Part 1 of the book is on theory, with the second part dealing with application. A large section of part 1 deals with the psychological, neurological and social issues around memory. Feldman provides fascinating insights into how the mind works and how often highly educated people simply can’t process conflicting pieces of information. This research is an incredible defense to the biblical injunction of lashon hara.

Feldman writes of the devastating effects of lashon hara when the speaker is sure of the message they are conveying; combined with the listener who has their own set of cognitive biases. The ability to process information effectively with limited and often partial facts is not a trivial exercise. The book details the myriad conflicting physiological values and constraints that take place.

As noted in the title, part 2 deals with current issues such as social media, blogging, Internet, modern journalism and more. Based on the constraints of lashon hara, it’s not so simple that book and product reviews are permitted. While Feldman quotes sources that allow reviews if they are fair, honest and unbiased (as hopefully this review is), he quotes a modern authority who is inclined to prohibit reviews.

The book spends considerable amount of time dealing with the Internet. With its many benefits, the Internet is a challenging place for lashon hara. Challenges such as anonymity, cyber-bullying, email and the like are not trivial issues. The book deals how Internet anonymity contributes to a disinhibition effect, which leads to a perfect storm for gossip and slander.

False Facts and True Rumors: Lashon HaRa in Contemporary Culture is a valuable book that provides the reader with a broad understanding of the awareness and sensitivities one must have when communicating. He shows that it’s not just that avoiding lashon hara is a good thing, not saying it or listening to it makes one a better and more sensitive person.