Motti Inbari is an associate professor of religion at the University of North Carolina with a fascinating new book: Jewish Radical Ultra-Orthodoxy Confronts Modernity, Zionism and Women’s Equality (Cambridge University Press 1107088100). John Gilmore famously said that the Internet interprets censorship as damage and routes around it. Similarly, radical ultra-orthodoxy generally doesn’t confront anything modern; it simply discounts and overlooks it. 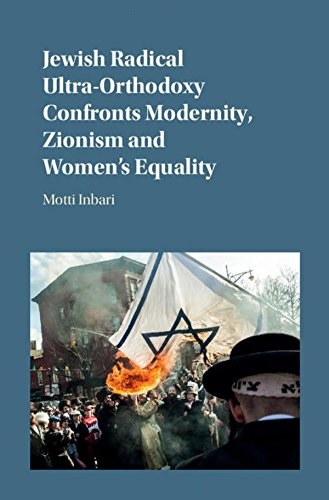 The book is overview of the history and ideology of some of the main segments of anti-Zionist Orthodox Judaism. The 3 main personalities covered are Jerusalem-based Rabbi Amram Blau, founder of the Neturei Karta, Rabbi Chaim Elazar Shapiro of Munkacz, Ukraine and Rabbi Yoel Teitelbaum of Satmar, Hungary. The later 2 were world-renowned rabbinic scholars, while Blau was known for his religious activism.

In the following 8 chapters, Inbari has written a well-researched and objective take on the subject:

While the fight against Zionist sentiment was often based in religious sources; Inbari writes that their opposition to the modern state of Israel has to be understood as part of their broader struggle against modern culture and all of its manifestations. These religious leaders embodied a unique type of fundamentalist leadership: one that is enclave based and defensive; yet engages in constant protest.

The Neturei Karta was founded in 1938 and opposes every aspect of Zionism. They call for the complete dismantling of the State of Israel in the belief that Jews are forbidden to have their own state until the arrival of the messiah. Inbari notes that the Neturei Karta consists of but a few hundred members (similar to the Westboro Baptist Church), yet exert an influence far greater than their size suggests.

Interestingly the book notes that Blau’s personal archive has ended up in of all places, the Boston University Library. This is due to the fact that universities in Israel were for the most part unwilling to invest in preserving and maintaining Blau’s archives. The new material the archive provides gives a glimpse into Blau’s mindset that heretofore was unobtainable. Rather than being just a narrow-minded religious zealot, Inbari details Blau’s personal side, especially with his relationship challenges with his second wife; whom he married after being widowed for a number of years.

In chapter 3 on the modesty campaigns of Blau, Inbari writes interestingly that Blau was able to achieve a level of authority that placed him on the same level as the spiritual level of the Haredi rabbinic community. While the Rabbis gained authority from their level of rabbinic knowledge, Blau gained his power from his activities in the field of inspection and enforcement.

The chapter on the life and work of Rabbi Yoel Teitelbaum is particularly interesting. While it’s quite easy, yet incorrect, to label Teitelbaum as a narrow-minded extremist, Inbari writes that he was a complex character and underwent many changes over the course of his life. He notes that Teitelbaum revived a unique branch of the diverse world of Judaism, and became one of the most interesting figures in contemporary Jewish history.

Inbari’s conclusion is that it’s far too trivial to simply conclude that the motivating force behind the radical stream of Hasidic ultra-orthodoxy was simply anti-Zionism; in truth it was about anti-modernism. The negation of Zionism was just one part of a broader worldview.

The topic is a both a challenging and emotionally-charged one. Inbari does a good job of providing an unbiased approach to the topic. This is one of the first books to make significant use of the Blau personal archives. Aside from a very small number of reference errors (for example, attributing something to Maimonides when it is found in the Talmud), this is a well-researched and engrossing book, which makes for a fascinating read.

Inbari’s conclusion is that the groups which seemingly are quite hesitant to change, nonetheless have a strong capacity to adapt and to overcome obstacles.

As Israel Independence Day approaches this week, many of these groups will be protesting Israel’s very existence. Perplexing to outsiders why they would do this, in a country that is quite benevolent to them, Jewish Radical Ultra-Orthodoxy Confronts Modernity, Zionism and Women’s Equality explains eloquently just why these groups do what they do, how they are thriving, adapting and expanding.