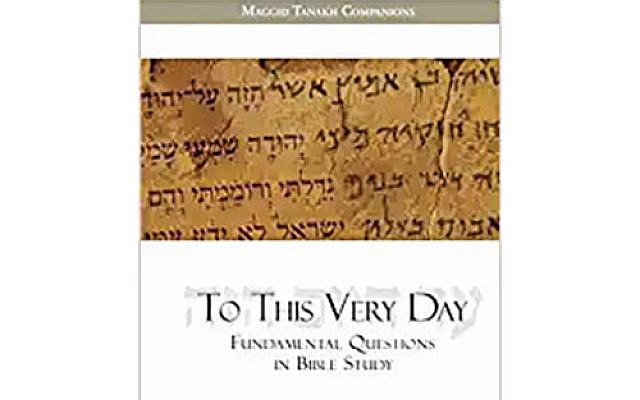 In a Twilight Zone episode titled Nothing in the Dark, the protagonist Wanda Dunn is an old woman who has an irrational fear of death. She thinks that everyone coming to her door is a potential angel of death. She spends her life in a dark basement apartment in an abandoned tenement, shutting the world out.

She eventually allows in a wounded police officer who pleads for her help. Played by a young and handsome Robert Redford, the older woman finds out that the kind and dashing man is, in fact, the angel of death. He tells her that it is not him she is afraid of; instead, she is afraid of the unknown. And that, in fact, she should not be afraid.

That episode, with the theme of confronting one’s worst fear, is a fitting metaphor for To This Very Day: Fundamental Questions in Bible Study (Maggid Books 978-1592645152), an extraordinary book that deals with many theological notions that people are often terrified to deal with.

The book aims to portray the unique approach that has arisen in the current generation among Bible scholars, who come to Tanach study with deep, serious belief, on the one hand, and according to the prevailing methodology of Bible criticism, on the other hand.

The term Bible criticism is enough to make many Orthodox Jews apoplectic. However, as Bazak writes, while these writer’s opinions may not fall within normative Jewish thought, they nonetheless raise legitimate questions. In fact, many of these questions have been dealt with in traditional sources, often going as far back as Ramban, Ramban, ibn-Ezra, Ralbag, and others. While many of these questions go back a thousand years, what Bazak has masterfully done is to gather all of these views into a single collection.

From that, there are two approaches to deal with Bible criticism – either condemn it as forbidden or engage it directly in order to answer their questions, which in turn can give a person a much deeper and more appreciative understanding of Tanach. Even for those that are not bothered by the questions from Bible criticism, they likely know someone who is and may be able to engage them in an honest discussion.

The critical point that must be understood is that the challenges posed by critical Bible theory are not a threat to the believer. Instead, as Bazak astutely writes, it is a means for a more in-depth understanding of God’s words as revealed in the Bible.

Some of the topics include – the authorship of the Torah and Tanach, verses added to the Torah at a later date, Tanach and archeology, Tanach and literature of the ancient near east, the reliability of the Masoretic Text, the sins of Biblical figures, and more.

Every chapter in the book is brimming with fascinating insights, but the chapter on Torah and archeology is particularly enlightening. One frequent complaint from the Bible critics is that there is no evidence of the Jews in Egypt, leaving Egypt, or of their sojourn in the Sinai desert. For most people, it is a difficult question to answer, given that most of us lack a thorough understanding of Biblical archeology and Egyptian history.

He shows how in fact, in the last generation, several studies have appeared that noted a very close correlation between the Torah’s description of slavery in Egypt and the Exodus and what we know of Egyptian culture at the time. Furthermore, the biblical account of the slavery in Egypt extensively uses words and expressions that archeological discoveries have made familiar. Bazak concludes that rather than being a challenge to the Torah, archeology can nonetheless contribute to an understanding of and an appreciation for Tanach.

There are two ways to deal with external challenges to our faith. One can be afraid and insular like Wanda Dunn, or one can engage with these challenges. Bazak has shown that rather than be terrified and dismissive of academic Bible study, one can encounter it, and like our forefather Yaakov, come out of the battle victorious.