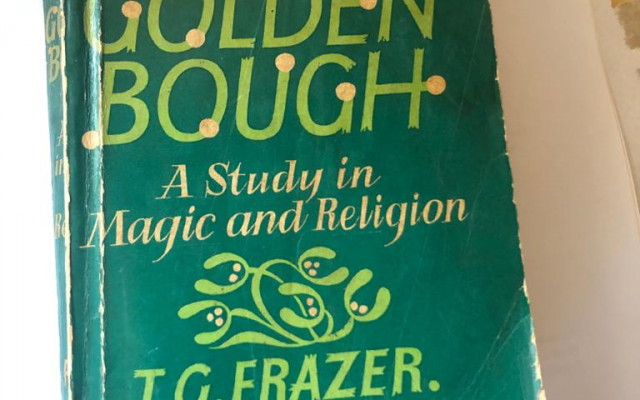 photo by Dorothea Shefer-Vanson of paperback book published by Macmillan, London in 1960

Anyone who has been reading my blog in the last few months may have noticed that it contains more book reviews than there used to be. For the sake of those of my offspring who find that subject boring I have tried to vary the subject-matter, but they can blame the isolation imposed by the coronavirus pandemic. Books have been my main consolation during this time but I have always been an avid reader, and my idea of purgatory is not having anything to read. In fact, since my childhood books have been my constant (and sometimes my only) companion. I am grateful to the public libraries in London which enabled me to satisfy my need to always have something to read.

And so, when a recent zoom meeting of the only group in which I still participate set as a subject for discussion ‘A Book That Has Influenced Me,’ I had no hesitation in choosing J.G. Frazer’s study of comparative religions, anthropology, history and sociology entitled ‘The Golden Bough; a Study in Magic and Religion.’ The paperback copy I bought in 1962, when I was a university student, numbered almost 1,000 pages and was touted as the ’abridged edition in one volume.’

Abridged or not, what I read was a true eye-opener. The author’s vast knowledge of classical literature and mythology, sheds light upon the similarities between many ancient religions and myths, encompassing the rites and rituals, totems and taboos, analogies and parallels in the beliefs of primeval humankind. The Golden Bough of the title refers to the Priest-King of the Grove of Diana, according to Vergil’s account, awaiting his own murderer under the sacred oaks. The death of the central figure is echoed in many religions, and it does not require much prior knowledge to extend the parallel to other faiths. The breadth and depth of knowledge displayed in this book served to make me stop and think about my own religion, Judaism, and the many parallels between it and other ancient myths and beliefs.

Many other books have influenced me, whether in my youth or more recently. Leon Uris’s ‘Exodus,’ which I also read when I was a student, helped me to see the importance of Israel in the life of every Jew, so that I determined to make it my home. Of course, there were other factors at work to impel me to leave England, but that was indubitably one of them. Uris’s vivid portrayal of the struggle of Jews in post-Holocaust Europe to reach Israel and establish it as a Jewish state gave a voice to the millions of Jews who perished in the gas chambers as well as to the survivors who emerged from the wretchedness of the concentration camps.

Another writer who had an effect on my thinking was Arthur Koestler. I had read his novels ‘Thieves in the Night’ and ‘Darkness at Noon,’ but in 1964 was alerted to his new book ‘The Act of Creation’ by a review of it in the ‘Observer.’ I still have my much-thumbed hardback copy of it. One of the basic premises of the book focuses on the important role played by the subconscious (or unconscious?) in artistic and scientific development. I learned a lot about the history and sociology of science from reading this book, but Koestler’s main talent was in bringing many different threads together into a coherent whole, pointing out the role of humour, language, art, travel, hierarchies and of course society, to name but a few, in the development of human thought.

There have been many other books that I have enjoyed, and I cannot end this effort at summing up my intellectual formation without mentioning the writing of Virginia Woolf, whose lucid prose, whether in her novels or her essays, never fails to fill me with envy and inspiration. And last but not least, I feel I must mention in passing the inimitable P.G.Wodehouse, whose fanciful and well-written accounts of the life of the British upper-classes never fails to have me in fits of laughter. And that is, after all, what we need to lighten our mood in these gloomy times.