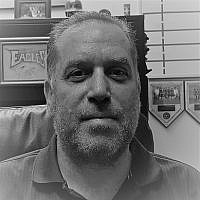 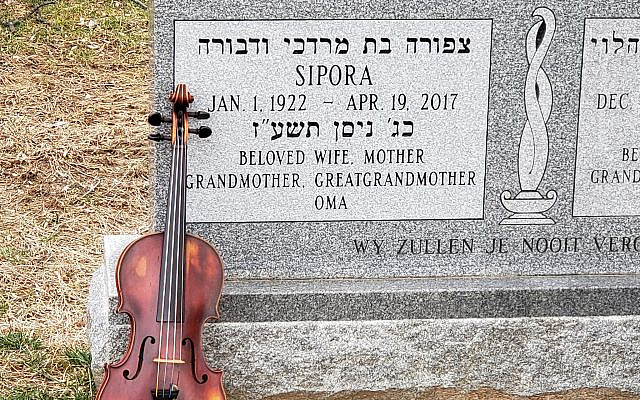 Bram's violin up against the tombstone of his sister Sipora. (Courtesy)

Can you imagine six million of anything. I personally find it an impossible thing to do.  I’ve tried to imagine six million dust particles I find it impossible.  Six million grains of sand. I get nowhere. Ask me to imagine 6 million people, let alone six million Jews murdered and there is absolutely no way that is something I can wrap my head around. Nevertheless I know that it happened.  There is proof,  there is evidence and the perpetrators did not even deny it.  On the contrary, they were proud and determined. The inability to comprehend six million of anything however leads me to believe that to be one of the main reasons why the Anne Frank house and her diary have impacted the world on the level that it has. It is far easier to identify with one specific situation, 1 specific person, 1 specific tragedy than it is to identify with six million people getting murdered. The more I think about this the more that it makes sense. The diary of Anne Frank has for many people in the world been a representation of the horrors that took place. I realize as I embark on my mission of telling the world about the violin that belonged to my uncle, that I am offering another symbol of the tragedy and devastation of the time.

The story of Anne Frank is the story of a sweet innocent 13 year old girl who was guilty of nothing other than being Jewish.  In a world in which many espouse their desire for social justice,  Anne Frank’s story eliminates much prejudice and political bias. I am sure there are numerous theories put forth as to why this is the case, but to me the first reason  seems to be mostly because her innocence is unquestioned.  She was a harmless young girl made to live in terror and hiding because Nazi Germany wanted to eliminate every Jew from the planet.  The second reason may very well be because like the majority of the 6 million Jews killed, Anne Frank was nothing more than a regular person.  She was not a politician, a soldier or a dissident.  She was a little girl who  just wanted to go to school, make friends and go home to her family.  And, maybe most significantly in getting the attention of those not connected to this history, she had something real that people could relate to.  A diary.

As I take the time to stop and think about the story of my uncle, I realize the similarities are not merely significant, they’re critically important.  My uncle, Bram Rodrigues, the younger brother of my  late mother, was one month shy of his 19th birthday when he was killed in Auschwitz.  Having lost his mother when he was 10, Bram was a young boy just trying to find a direction and purpose in life.  He found it in his violin and with his friends.  His story could have been anyone’s story.  Sadly young children lose parents.  Their story is sad, often tragic, but their story is common enough to make them regular people with regular lives. 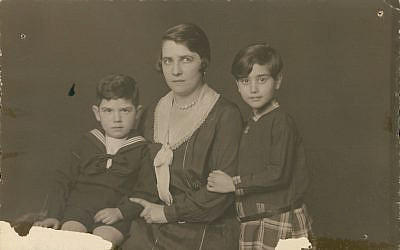 Bram on the left, with his mother and sister Sipora. (Courtesy)

So much of life is about perspective.  There are those who will see the picture of the violin of Bram, murdered at 18 next to the tombstone of his sister who lived to be 95 and say that this is all that is left.  I suggest something much more meaningful and far more powerful.  It represents the fact that even the evil of Nazi Germany can not extinguish the flame that is the Jewish people.  As I put the violin, the symbol that represents my Uncle Bram’s story up against my mother’s tombstone, I did not feel like I was merely putting a musical instrument next to a piece of stone, I felt like in some very meaningful way I was reuniting my mother with her brother here on earth, as they look down at us, together from above.

This is not only something we can all relate to, it keeps the history of the 6 million Jews killed relevant and in the forefront.  In a world in which once again Jew hatred is rising,  this is as important as ever.   Bram’s violin, like Anne Frank’s diary, will help those who need to know the story, have something tangible to which  they can relate.  And just like a 13 year old girl who never had a chance left behind a powerful legacy in her diary, so too an 18 year boy who also never had a chance has his legacy left behind, in the form of a violin.