I make people laugh. For a living, even. Early yesterday afternoon, I wrote the following status on Facebook:

Why is there security at Mini Israel? Are they worried about a mini-pigua?

Twenty-two “likes” later, life was good. Until the horrific news broke about the Bulgaria attack.

My friend Liza texted me: “I liked your pigua [Hebrew for “terror attack”] update earlier, but there was just a pigua against Israeli tourists in Bulgaria with at least five dead. You might want to take the post down.”  That is, in case someone thought I had written it after the attack, or simply found it distasteful considering the context.

This extremely unlucky coincidence is emblematic of what it’s like to try to maintain a sense of humor in a country where nightmares are always lurking somewhere around the corner.

I always tell people that if you’re going to make aliya (or stay here, frankly, if you’re a native), you’d better have a sense of humor. Rabbi Joseph Telushkin, in his book on Jewish humor, attributes the classic Jewish sense of humor to a need to “laugh to keep from crying.” There is no shortage of reasons to cry. I joked about the flotilla after it happened, and according to the responses from my fellow olim, who fall all over the political spectrum, it was welcome. If I can make any of our lives a little less painful, I’m going to give it my best shot. But what to do when this horrific news hits, just hours after you post something innocent about Mini Israel? 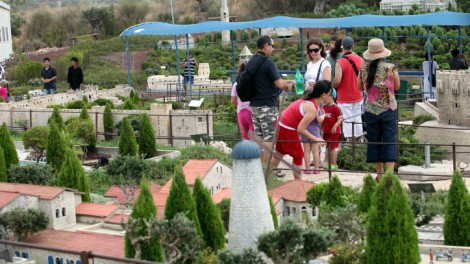 First, you do what everyone else does. Because at that moment, you’re not a comedian — you’re just a normal Israeli. I watched the headlines stream in on Twitter and Facebook. I did something I never did in my “oleh hadash” days: I figured out how to pull up Channel 10’s Hebrew news online, and watched the initial reports come in.

I read this blog post about the process of “becoming Israeli” through tragedy, thinking, “Yep, I remember going through that.”

I walked next door to pay my va’ad bayit (building maintenance fees). As the mother of the family opened the door, I saw her son sitting on the couch watching cartoons. He couldn’t have been older than 10. I asked the father in a hushed voice, “did you hear the news?” Of course he had.  They’ve always heard the news. Israelis imbibe coffee almost intravenously, but somehow the news gets into their bloodstream even faster.

Silly me to whisper, thinking that perhaps the kid shouldn’t know what was going on. When the father sat down next to his son and started watching the news on his laptop, I remembered that I live in a country where six-year-olds knew about the Gilad Shalit story as it was happening.

And then I returned to my apartment and just sat there. No energy. No motivation. Just watching updates come in on the various social media sites, which are hardly conducive to productivity during non-news times.

And then I remembered this thought, which pops into my head on the (thankfully) rare occasions that terror strikes: How did anyone get anything done during the intifada? I have been here six years (nothing to sneeze at), have lived here enough time to have developed some understanding of what it means to be Israeli, and I have zero understanding of what it was like when piguim were an almost daily occurrence. When I say that Israelis are resilient, it’s really just a talking point that I’m regurgitating. What do I really know about resilience? I can’t imagine how people had the emotional energy to carry on, when just one (and even one is too many) terror attack knocks me out for hours.

Last night, at dinner, when I expressed this to my Israeli friend Amalia, she answered, “Maybe the only way you’ll get it is if a third intifada happens.” My response? “Yeah, I’ve thought about that before.” Welcome to Israel, my friends from abroad. These are the conversations we have here.

I didn’t want to delete my Facebook status. For better or worse, I ended up changing the date to have it appear last month (thank you, FB Timeline). One, because my friends and I thought it was funny. Two, because there’s something about deleting internet content that seems a bit revisionist, like I’m changing history. And three, because I hadn’t done anything wrong; I was just a victim of some poor timing that was entirely beyond my control.

Woe is me. I’m not the real victim. The real victims are the innocent Israelis who did nothing more than take a vacation to Bulgaria, and paid for it with their lives.

Eventually, and probably soon, we will go back to our routines, and I’ll return to smiling and making light of the crazy country that is Israel.