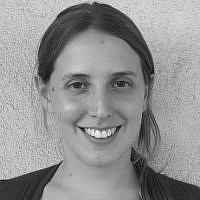 The Blogs
Noga Shafer Raviv
Apply for a Blog
Please note that the posts on The Blogs are contributed by third parties. The opinions, facts and any media content in them are presented solely by the authors, and neither The Times of Israel nor its partners assume any responsibility for them. Please contact us in case of abuse. In case of abuse,
Report this post.

JERUSALEM / KIGOMA — One thing can be said for the crisis unfolding in Burundi over the past month and a half: it has put this small impoverished East African nation that most Israelis cannot locate on a map into the international news cycle. But that’s a mixed blessing, considering that it takes a military coup attempt and the threat of widespread violence to get this country, about the size and population of Israel, and one of the poorest in Africa, the attention it deserves.

I came to Burundi for the first time in February 2014, in order to help Tevel b’Tzedek, the only Jewish organization in the world trying to transform poor villages in the developing world, begin a pilot project in Burundi. I knew then that nearly everyone in the country was still wounded from the ethnic conflict that had killed 300,000 over the past 12 years. Yet the peace had held since 2006, and the people were hungry—literally hungry, and hungry for our help. And although we had been warned that the politics might heat up as the elections approached, no one could have predicted the extent. Then, Political turmoil in Burundi erupted over President Pierre Nikuranziza’s controversial bid to stand for a third consecutive term, a move that is viewed by opposition as unconstitutional — and in contradiction to the Arusha peace accords, which brought an end to more than a decade of bloody civil war.

The Burundian “Crisis” of 1993-2005, that began in parallel to neighboring Rwanda and ran along the same ethnic lines of Hutu majority and Tutsi minority, left 300,000 dead and hundreds of thousands of refugees. Today, everyone’s major concern is that the current events, so far described as politically based, could reopen ethnic wounds and stimulate widespread violence. Fearing persecution, over 100,000 Burundians fled the country over the past weeks seeking refuge in Rwanda, DRC and Tanzania, where the dire sanitary conditions of some transit camps are already costing lives. So far, incidents have spanned dozens of deaths on the streets of Bujumbura in clashes between protesters, police and army (exact numbers are unclear), a failed coup attempt, and grenade attacks in the crowded Bujumbura market.

Watching from the sidelines of Southern Burundi and across the Tanzanian border, my colleagues and I—including 2 Israeli and 4 Burundian staff members, 2 Nepali staff loaned from our “mother-ship” in Kathmandu, and 8 Israeli and Jewish and 9 Burundian fellows- were hopeful that violence would remain relatively contained in the capital city. But following the murder of an opposition leader, unrest spread outside of Bujumbura, with one death reported in Bururi province. As UN High Commissioner for Refugees Guterres said, Burundi does not need another crisis. Not only that; the people of Burundi deserve much, much better. 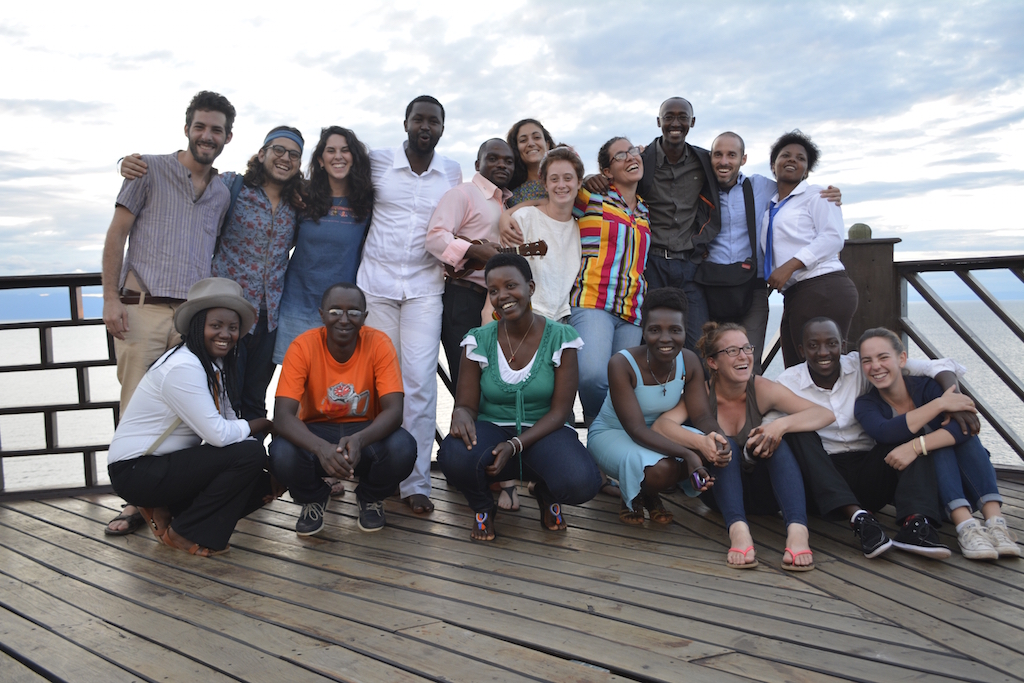 Tevel, the Jerusalem based NGO that I work for, began a community development program in Burundi one year ago. We chose to work in Burundi because of the extreme poverty its population faces, and because of this population’s resilience and determination to work together for a better future. We found during this year that the conditions in Burundi are indeed difficult to work in, yet the villages and communities we work with have so much potential for change that they make the effort rewarding. Slowly, slowly, over the course of the first year, relationships were formed, trust was built; change was beginning to happen.

The Tevel fellowship Program in Burundi brought together a skilled group of young people from Israel, the Jewish diaspora and Burundi to work as a multinational group in a rural community in southern Burundi for a period of ten months. They lived in the small village area Vugizo, sharing the same public space and challenging physical conditions as the local population, and volunteering in four thematic fields, each touching on a major challenge of Burundian society: agriculture, women empowerment, youth leadership and formal education. 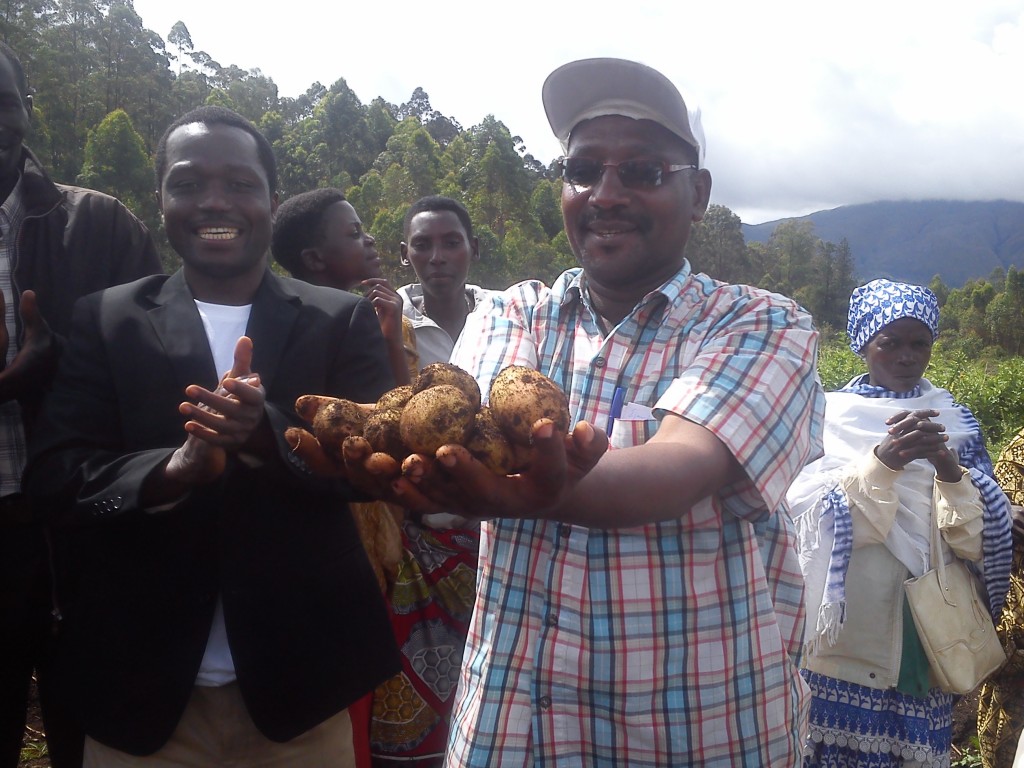 Agriculture is the lifeblood of rural Burundi, a country in which the vast majority of the population lives on subsistence agriculture, cultivating small family plots. Land shortage and degradation and a rapidly growing population means that people in the villages we work in go hungry for a season each year. Land ownership is also the main source of conflict in many villages, both within families and between returnees of the past crises who returned from refugee camps in Tanzania, and the residents who had meanwhile been cultivating their lands. In this atmosphere, Tevel’s work aims to help farmers increase their yields while working together in farmers associations. Working together, the image and norms of an active community, cooperating to improve its own wellbeing, solving problems and making decisions democratically, is strengthened. 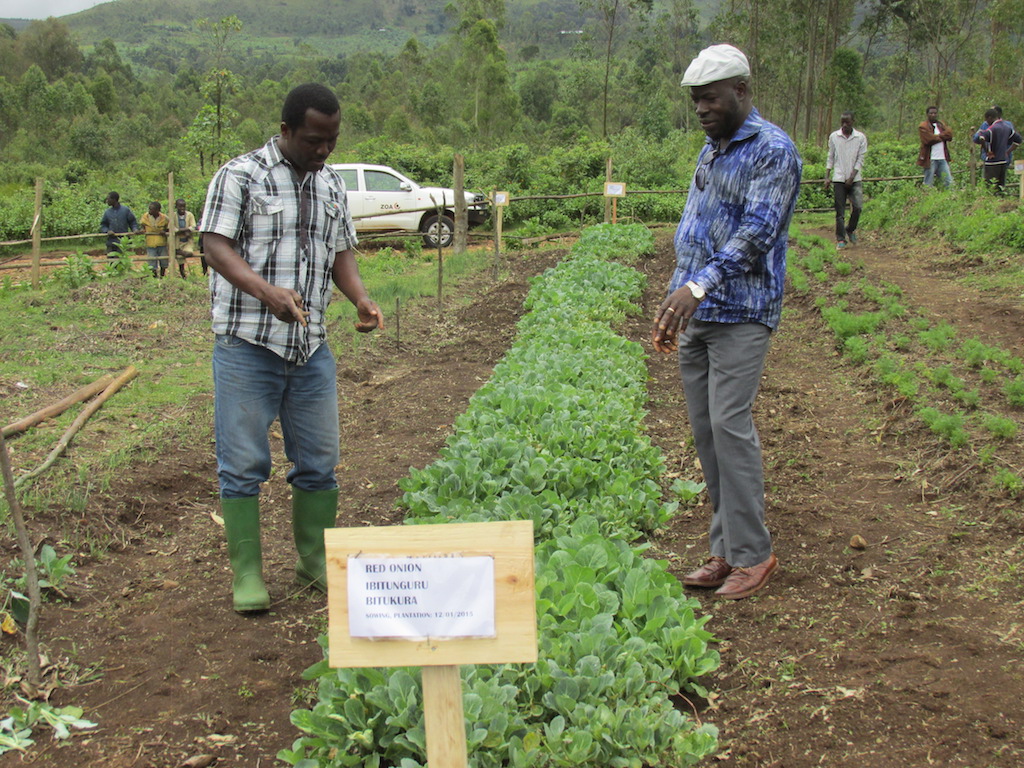 Enhancing a sense of community goes an especially long way when working with youth in a climate in which young people can easily be manipulated to political violence. For rural youth, most often unemployed and out of school with little future prospects other than working on their family farm, it can be very difficult to imagine a positive role for themselves in the community. 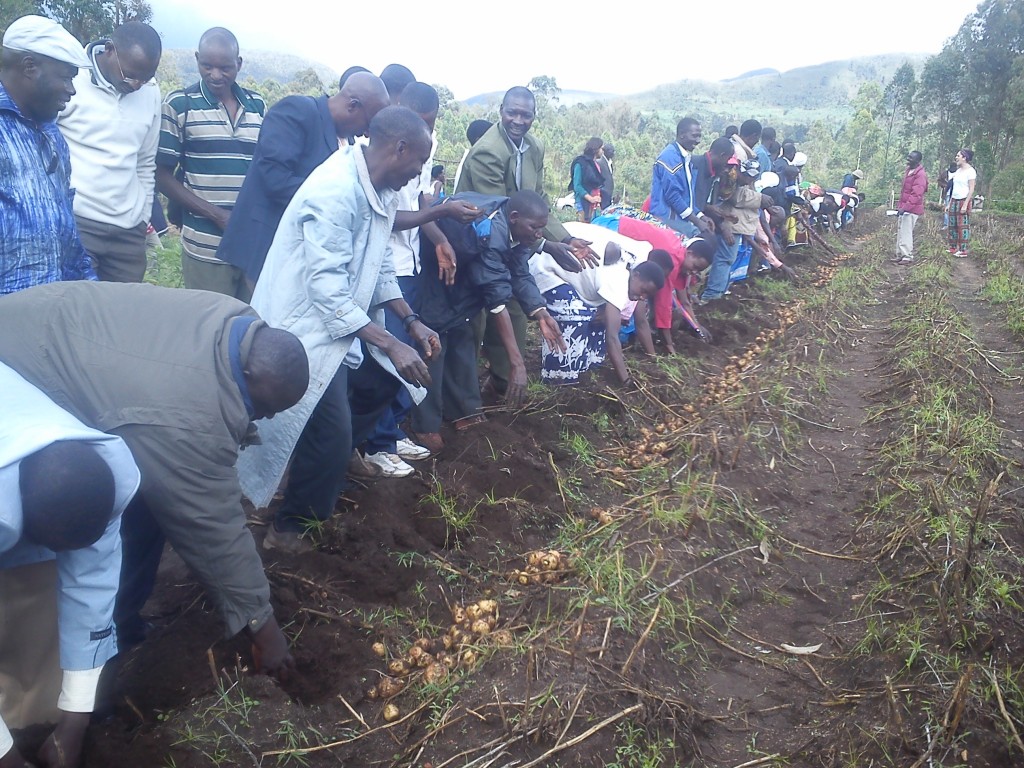 At the extreme end of negative examples stand the notorious “Imbonerakure”: the youth wing of ruling party CNDD-FDD, which is allegedly armed by the government, and has been accused over the past weeks of intimidation and violence against opponents of Nikuranziza’s third term. Youth groups run by the Tevel fellows opened an entirely new horizon for the youth of Vugizo, one of leadership, and commitment to become agents of change in their community, taking an example from their committed group facilitators, who believe in their ability to go a long way. 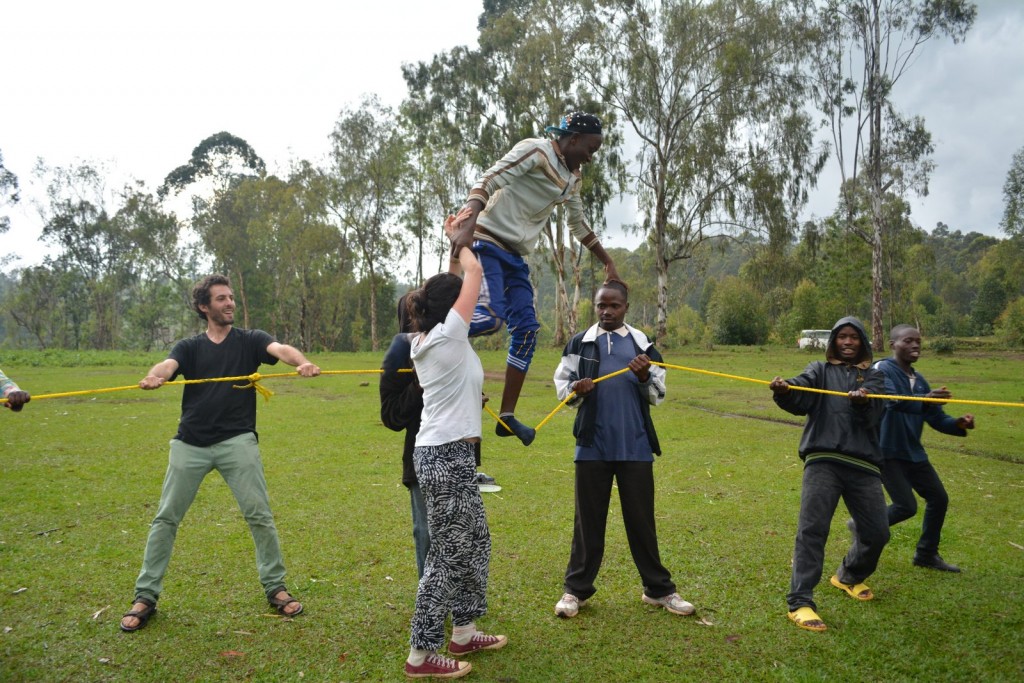 By leading these activities, our Burundian fellows changed as well. . Tevel’s team of 9 national fellows soon grew to become a cadre of bright young leaders, committed to their country’s development; they see their calling as work in the community, not street fighting. Living together in the same village house for eight months with their peers from Israel, Europe, North and South America, sharing their life stories and negotiating values, likes and dislikes, created very unique relationships of love and mutual respect.

However, the shared village life came to an abrupt and traumatic halt on April 24th, when nationals and internationals alike evacuated to the other side of the Tanzanian border, in anticipation of the protests which were about to erupt in the country. Thrown into strange solidarity with the tens of thousands refugees leaving Burundi, they followed the news apprehensively, hoping for the opportunity to return to their unfinished work in the village. Finally, the national fellows reached a brave, inspiring decision: although their international peers were unable to join them, they returned to the village to continue the projects themselves. The community of Vugizo was happy to see them back. These villagers now know that despite the turmoil in their country, they need not lose hope for a better future for themselves.

Burundi does not need another crisis, but what does it need? Reflecting on what they learned in eight months of work in the village, our team was clear that despite its impoverishment, the villages of rural Burundi are nonetheless gifted with invaluable assets. Among them is the bountiful culture of associations, which sprang up over the past decade in every village in the country, through which farmers, youth and women organize themselves to promote self-help and solidarity. 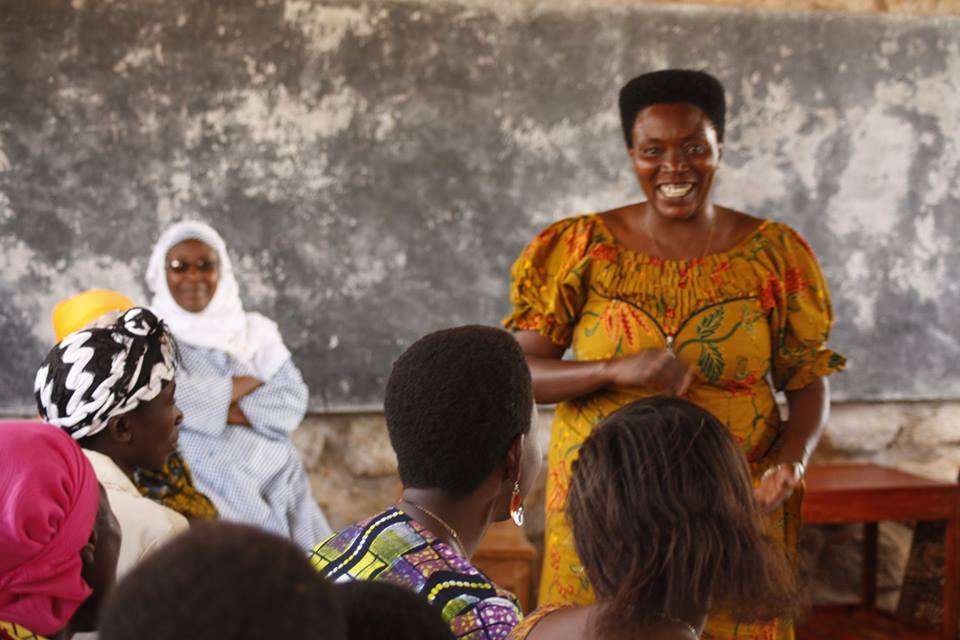 Another is the endless resourcefulness and resilience of these villagers, who in a reality of hardship and need, are able to engage in multiple endeavors to improve their livelihood. And finally, a robust, joyful culture, ready to burst out in song even in times of hunger, and strong faith, that make hope for the future possible. Burundi needs the international community to recognize these assets and nourish them. It needs the involvement and commitment of the international community, not only to prevent humanitarian crisis in the rapidly growing refugee camps, but also to insure that human and civil rights are defended in Burundi. Burundians deserve political freedom, freedom of speech, and the freedom not to be persecuted and killed on the streets of their capital city or in their villages. Burundi deserves better. 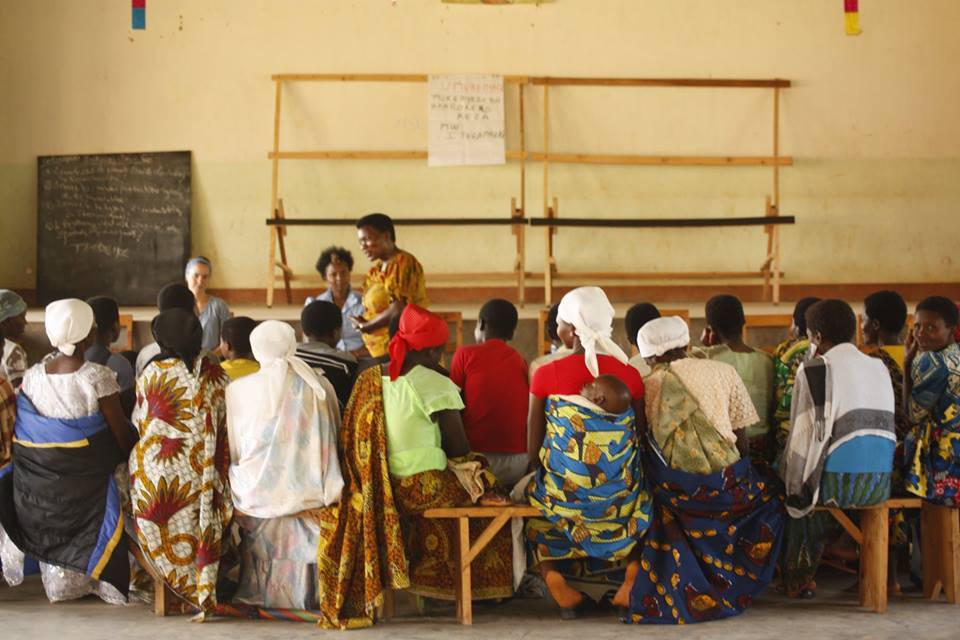 Women empowerment seminar in Burundi (photo: courtesy)
About the Author
Noga Shafer Raviv is Director of Community Development at Tevel, an Israeli NGO that aims to create Israeli and Jewish leadership passionately engaged in Tikkun Olam—fixing the world—locally and globally.
Comments