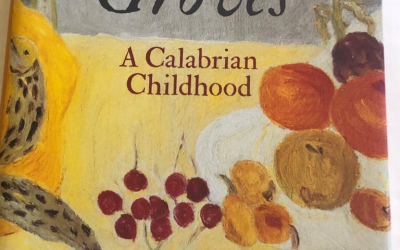 In these Corona-dominated times, when travel is well-nigh impossible, we can console ourselves to some extent by reading about the places we would like to visit, and this book certainly fills that gap.

I really enjoyed reading this book (published in 2017 by I.B.Tauris), which describes the author’s childhood in a remote village in the southern Italian region of Calabria. Grazia Ietto Gillies, who is today an academic economist living in London, writes in an entertaining and insightful way, describing daily life in the village, the relationships within the nuclear and wider family, the way goods and services were provided and, best of all – the food her mother cooked. Thus, each of the twenty-five chapters ends with recipes as well as instructions for preparing the food mentioned in the chapter.

Only the first ten years of the author’s life (1939 to 1949) were spent in Calabria, as subsequently the family moved to Rome, but the memory of those childhood years is evidently still deeply embedded in her memory, and she is able to perfectly convey the feelings, aromas and activities she experienced growing up in that environment.

The life that is described in the book is basic, involving many hours of labour-intensive activity on the part of the housewife. Grazia’s family home had electricity and running water, which was not the case for all the families in the village performed by Grazia’s mother, but it took time until machines which could do many of Grazia’s mother’s daily chores arrived in that mountain-top village. The lack of a refrigerator meant that a daily visit to the market to see what was on offer and decide what to cook was an essential part of her mother’s daily routine.

In those early years, especially during and immediately after the war (WWII), food was not plentiful and people learned to make do with the fruit and vegetables that were readily available. Thus, there were figs and grapes in the summer, as well as chestnuts and olives at other times of the year, while nourishing soups were made from dandelions and other plants growing wild in the area. Women invested a great deal of time in bottling and preserving the fruit and vegetables that were plentiful in their season.

Particularly fascinating is the author’s account of her schooldays. At that time the village did not have a school building, although one was built later. Instead, each class was situated in a rented room in one of the houses. The account of the attempt of one unfortunate substitute teacher to keep the class interested had me in fits of laughter. Having decided to read out part of de Amici’s book Cuore (The Heart), which describes the (mis)adventures of a boy in search of his mother, children and teacher ended up ‘sobbing and wailing uncontrollably.’ The door suddenly opened to reveal the landlady, who threatened to throw them all out of her house if they did not ‘stop this nonsense and noise in my house immediately.’ The author concludes by recounting that she found out the end of the story only many years later, when she bought a copy of the book and read it for herself.

One of the first chapters describes the milkman arriving in the morning outside the family home with his goats and proceeding to milk one of them into the receptacle provided by Grazia’s mother. Other chapters describe the role of the church and the various festivals, the games the children played, the many members of the wider family (whose photographs are included), since both sets of grandparents and most of her parents’ adult siblings were still living in or near the village, and of course the relations between the various inhabitants of the village.

Many of the recipes seem easy to make and require simple but fresh ingredients. Salient among the lessons I am taking away from this book are the importance of good quality olive oil and the idea that it is better to tear up fresh basil leaves into a dish at the last moment instead of incorporating the herb in the cooking process. In some of the recipes the author adds the adaptations she has made for them to the ingredients available to her in London.