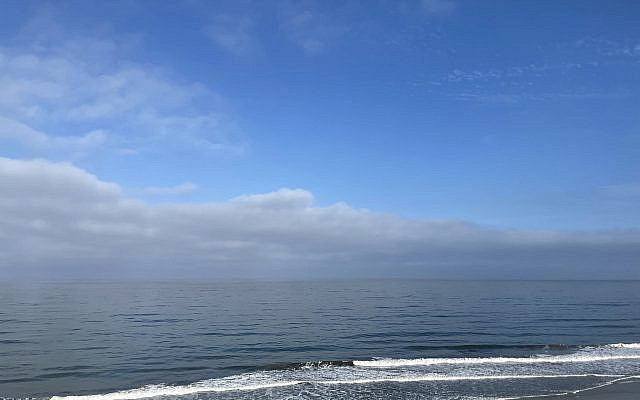 On the beach. Photo by Vicki Cabot.

There is something about being by the sea.

Especially at this time of the year, when so long ago I was a winsome bride pledging her troth to a gallant groom on a muggy summer’s eve.
So many years, so many memories, to have and to hold, over those more than five decades since.

They wash over me as we stroll along the beach, one after the other, just as the waves flow toward the shore and return to the sea.
They tug at my heart.

I recall our first week as newlyweds, at the beach, the giddiness of young love, the newness of being husband and wife, the novelty of gold bands circling our ring fingers.

We shared a string of sun kissed days, lazing on the warm sand, the cool, blue water tempting us to take a dip, the school of tiny fish nibbling at our toes.
And we walked along its edge, hand in hand.
Together.

And then, as our family grew, those summer getaways for just the two of us grew to include first one, then two, then two more, kids in tow. We packed them into the car, along with buckets and shovels, boogie boards and beach chairs, coolers and blankets, heading north to Cape Cod to a rustic beach cottage in the pines.

It was just like the ones where we had vacationed as kids with our parents, with a short walk through the woods to the bay, or a more adventurous trek over the dunes to the ocean.

And we spent happy days filled with little ones building sand castles and moats, searching for shells and sand dollars, dipping their toes in the water where the waves lapped the shore, then later, as time passed, racing into the surf to ride them. And always, the passel of tired hungry kids, with sun burned noses and sandy toes, clamoring to stop for ice cream on the way home. Dripping cones with twirls of soft serve and rainbow sprinkles clutched in sticky hands and smeared on smiling faces.

And then we moved West, and our summer idylls came with us, though now on another coast, on another beach, where towering cliffs overlooked the shore, and we traipsed down the steep steps to the sand to spend days at the beach. At night, we were lulled to sleep by the sound of the waves lapping the shore and awoke in the early dawn to the expanse of a light filled sky over the water.
Another day.

And then, the days passed, and the kids grew up, and the family beach vacations became short fly ins West for a few days, nostalgic stays and precious time to catch up. And, later, a return to the East coast to again build castles in the sand with our grandkids and recall memories of those days long past while making new ones.

And then again, as this year, as another anniversary approaches, time to spend with each other and savor it all.

Walking by the sea, my love and me.

About the Author
A writer and editor, Vicki has been recognized for excellence by the American Jewish Press Association, Arizona Press Club and Arizona Press Women. Her byline has appeared for more than 30 years in Jewish News of Greater Phoenix and in a variety of other publications. A Wexner Heritage Scholar, she holds masters degrees in communications and religious studies from Arizona State University and a Ph.D in religious studies also from ASU.
Related Topics
Related Posts