The Wayward Moon by Janice Weizman is the captivating tale of a young Jewish woman surviving despite the hardships of the ninth century Middle East.

Imagine that you are traveling in a caravan across the desert. Your camel stops for the night at a khan on the road between Mosul and Damascus. After a hearty evening meal, you wait at your table for the evening’s entertainment. Tonight there will be a storyteller, one with quite an unusual tale. The speaker is a young woman, but what she relates is only a partial account of her ordeals. She doesn’t reveal her true story, one that would keep you riveted to your chair far into the night.

This is Rahel, a seventeen-year-old Jewish girl born in Sura, a city south of Baghdad. Rahel is about to meet her fiancé for the first time, but instead of wearing her white wedding dress to the huppah, she is forced to flee in the wake of her father’s murder. Rahel loses not only her home and all her possessions, but also her identity, both as a Jew and as a woman. 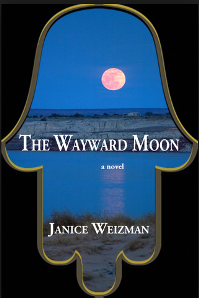 Rahel makes her way north, encountering Christians, Muslims and Jews along the banks of the mighty Tigris and Euphrates rivers. She is taken into slavery, spends time in a monastery. But, instead of surrendering to fate, Rahel is determined to survive despite the adversity in her life.

Rahel’s adventures occur during the early years of the Golden Age of Islam, when much of the Middle East was ruled by various caliphates, experiencing a scientific, economic, and cultural flourishing. There are signs of anti-Semitism about, as evident in the murder of Rahel’s father, but for the most part, Christians and Jews are allowed protected status under Muslim rule. From the start, Rahel is convinced her future will include marriage to a Jewish man, and this belief is what keeps her traveling on her journey from Babylon to a small village in the Galilee.

The Wayward Moon (Yotzeret Publishing, September 2012) is historical fiction staged in an unusual setting and an unfamiliar century. This golden age comes alive through the author’s colorful storytelling and by her use of vivid descriptions of the customs of the time. Even readers who typically avoid period pieces will be entranced by the adventures of this determined, remarkable Jewish heroine.

Janice Weizman was born and raised in Toronto; she moved to Israel at the age of nineteen. She is the founder and managing editor of the literary journal, The Ilanot Review. Her short fiction has appeared in various journals, including Scribblers on the Roof, Jewish Fiction, and Lilith. The Wayward Moon is her first novel.

Read an excerpt of The Wayward Moon.