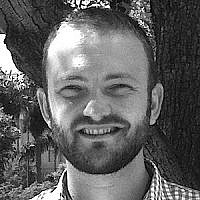 The Blogs
Ethan Bair
Apply for a Blog
Advertisement
Please note that the posts on The Blogs are contributed by third parties. The opinions, facts and any media content in them are presented solely by the authors, and neither The Times of Israel nor its partners assume any responsibility for them. Please contact us in case of abuse. In case of abuse,
Report this post.

In Hebron last month, I sat across the table from three Palestinian boys recently released from prison after serving four months in Israeli military prisons for allegedly throwing stones at Israeli soldiers (charges that all three boys denied). I was there to listen, as a member of a rabbinic delegation to the West Bank organized by T’ruah: The Rabbinic Call for Human Rights.

One boy told us that the Israeli soldiers who came to his house in the middle of the night first woke up all six of his brothers and sisters, and finally wrenched him out of bed, his eyes still practically closed, and threw him in a sack out of which he could not see, before taking him into the back of a military vehicle and beating him every time he cried or yelled for help. Abducted in the middle of the night from his bed, this Palestinian teenager could not say good-bye to his parents or give any of his siblings one last hug. His parents did not know where he was being taken, or how long he would be gone.

We could see that one of his eyes was visibly puffy and red. He told us that a soldier had damaged his eye on the way to the military prison. Even though a military doctor saw him once he got there, he had not received the treatment necessary to heal the wound. As a rabbi, hearing these stories triggered my Jewish memory muscles. I thought of Jewish children in a very different context in our history, who were abducted in the middle of the night to be forced into conscription with the Russian Empire’s army. The situations are not the same—and yet, our own experience teaches us the pain of families ripped apart, and parents not knowing the fate of their children. These flashes of Jewish memory were my personal emotional response to hearing the teenagers’ heart-wrenching stories.

I was in Israel primarily to spend two weeks studying at the Shalom Hartman Institute, where this year’s theme was tzedek u’mishpat, justice and righteousness. And here I was—a day before the formal program started—face-to-face with a heartbreaking and unjust reality.

When I returned home to the United States, I researched Israeli policies regarding the detention of children in the West Bank. While the boys we heard from told compelling stories, I wanted to hear outside confirmation of their experiences. I learned that Palestinians in the West Bank live under Israeli military law, while Israeli settlers live under civil law. In practical terms, that means that if an Israeli child is arrested for throwing rocks at Palestinians (as many do), he or she receives a summons; goes to the police station with his or her parents, who may observe the interrogation; and is tried under Israeli civil law. In contrast, Palestinian children are arrested in the middle of the night, taken from their parents, and tried in a military court system that has more than a 90% conviction rate.

As we listened to each of these boys’ stories, we could not help but think about how this formative, traumatic experience as children would shape their view and relationship with Israelis for the rest of their lives. When we asked the boys whether they had ever met an Israeli who wasn’t a soldier, they all gave the same answer: No.

While we couldn’t erase the boys’ experience, we committed to listening to them, to letting them know that rabbis and other American Jewish leaders care about them and promising to tell their stories. This became our act of solidarity.

Listening, understanding and remembrance are connected values that are the prerequisites for prayer, righteous deeds and transformation. The central Jewish prayer, Shema Yisrael admonishes us: Listen and understand that God is One. The constant liturgical reminder of Yitziat Mitzrayim, the “going forth from Egypt,” is a call to remember the power of the covenant that defines our relationship with God: just as God remembers us, we constantly commit to remembering God. And we honor that covenant through our commitment to live ethically, in accordance with Torah.

Our listening, understanding and remembrance must lead to action. As a people of covenant for whom our tie to the Promised Land is contingent on our ability to live out the ethics of Torah, we cannot stand idly by while legal structures result in the mistreatment of Palestinian children. The Israel Defense Forces’ current practice of middle-of-the night seizures of children, interrogation that includes physical and psychological intimidation, military court trials, and long sentences is neither Jewish nor just.

About the Author
Rabbi Ethan Bair serves as spiritual leader of Temple Sinai in Reno, NV. Ordained at Hebrew Union College in Los Angeles in 2011, Rabbi Bair was named one of the 20 Under 40 most influential young leaders in Reno - Tahoe last year by the Reno Gazette Journal. His main interests as a rabbi include Jewish spiritual practice, Jewish history and pastoral counseling. He was born and raised in Boston and is married to art historian Nadya Bair.
Related Topics
Related Posts
Comments