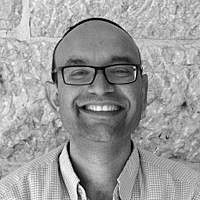 The Blogs
Matthew Lipman
Apply for a Blog
Advertisement
Please note that the posts on The Blogs are contributed by third parties. The opinions, facts and any media content in them are presented solely by the authors, and neither The Times of Israel nor its partners assume any responsibility for them. Please contact us in case of abuse. In case of abuse,
Report this post.

The Purim buzz is in the air! But that’s not all — so are elections. It seems that most conversations these days,in homes, school, and around the Shabbat table, are dominated by Purim and elections! But these two topics aren’t entirely disconnected. The current election campaign has turned into one giant Purim shpiel with a whole host of blunders and “truth is stranger than fiction” moments. Elections have become the Purim shpiel that lasts several weeks and keeps creating more moments of wry amusement. Prime Minister Netanyahu’s legal woes amid allegations of bribery and jovial excess, unholy alliances being formed between political parties (and now even the input of models and actresses) are surely in keeping with the Machiavellian spirit of Megillat Esther. It would be fitting for some of the candidates to dress up as clowns. But seeing as that may be too close to their every day personas, I humbly present a list of suggestions for costumes that some of our political leaders could don this Purim.

Benjamin Netanyahu
The current prime minister portrays himself as a tough guy who brings law and order to a tough neighborhood. He credits himself with keeping the bad guys in check and making sure that the people close to him can go about their business, making as much money as possible. Bibi keeps telling us there is no real law and order in this town, and that he is the only one who knows the law and can keep the streets safe. He is the gunslinger of the “Wild Middle East” so it seems most appropriate for Bibi to dress this year as a cowboy.

Yair Lapid and Benny Gantz
Lapid and Gantz’s highly unusual agreement to share the prime ministership in the event of election victory means that there are so many options for them to go as a couple this Purim. Jekyll and Hyde could have been one slightly disturbing option, and Superman and Clark Kent would be another. Which of the two would agree to show up to the party in red underpants worn over a blue lycra bodysuit is certainly open to conjecture. In the end though, I decided that instead of going as a kind of Yin and Yang pairing, it would be most appropriate for them to go as equals. Benny and Yair this year should go as an adorable set of double stuffed oreos.

Miri Regev
Culture Minister Miri Regev has a previous history of using her wardrobe to score political points, so Purim is a great opportunity for her. She is also the highest-ranked woman on the Likud list. She felt that this merited her being featured in the now infamous selfie that was taken last week. Upon being excluded from the selfie, she complained that the photograph highlighted the male Ashkenazi domination of the upper echelons of her party. Her complaints were met with a mix of derision or head-nodding, depending on who was responding. In the Purim story, some would argue that Esther was encouraged by Mordechai to take the “if you can’t beat them, join them” approach. In that spirit, it seems to me that the only costume option for Miri Regev this Purim is to don a suit and silk tie and dress as an Ashkenazi Male.

Moshe Feiglin
Moshe Feiglin is the leader of the Zehut party, which is gaining traction and a lot of attention in this campaign. One of the popular features of his platform is to scrap the Chief Rabbinate’s monopoly on controlling marriage. Zehut is advocating for people to be able to marry who and how they choose. There has been a lot written on these pages about Feiglin’s election manifesto and his campaign promise to legalize marijuana. In a very strange turn of events, the legalization of pot has suddenly become one of the big issues of the 2019 election. If Moshe Feiglin is so intent on sharing the love and encouraging people to smoke dope, then this year he should be dressing as a hippie.

Tamar Zandberg
Tamar Zandberg is the leader of the left-wing Meretz party. The party’s approach to religion and state-control of religion could not be any further from that of the Haredi parties — it’s as if they were separated by several galaxies. In fact, it really does often seem that Meretz and the Haredi parties are on totally different planets. Purim is a time when we celebrate the concept of “v’nafoch hu” or “events being turned upside down.” In order to really get into the spirit of “v’nafoch hu” it would be wholly appropriate for Tamar Zandberg to dress as a Haredi Rabbi, black hat, fake peyos and all.

This Purim, when you sit down to enjoy your Purim seudah, join in the political fun and make your own lists. What will Prime Minister Netanyahu be eating for his Purim seudah? No bonus points for guessing lots and lots of pistachio ice cream. Or how about what politicians are giving and (let’s be honest they are more likely to be) receiving for mishloach manot? Expensive champagne and cigars, anyone?

About the Author
Matthew Lipman is an Israel educator at Masa. He lives with his family in Modi'in and he is on a mission to share his love of Israel, Judaism and "dad jokes" with his wonderful children. He writes in a personal capacity.
Comments