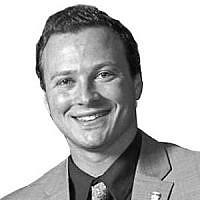 The Blogs
Adam Basciano
Apply for a Blog
Advertisement
Please note that the posts on The Blogs are contributed by third parties. The opinions, facts and any media content in them are presented solely by the authors, and neither The Times of Israel nor its partners assume any responsibility for them. Please contact us in case of abuse. In case of abuse,
Report this post.

By being asked to reflect on the Israel discussion on campus, one can take many different directions and pull from different resources. I can forward you the usual StandWithUs posters and fliers, tell you about how hard it is being Jewish on campus, or continue reiterating the best ways to respond to Israel Apartheid Week on your campus. Instead, I prefer to give you my honest opinion that I believe is also held by a quiet but growing group of self-identifying Zionists and others across universities in America.

The truth is that the situation on the typical American campus, whether in Claremont, California or College Park, Maryland, is stupid. There are certainly more scholarly and sophisticated words I could choose, but that would serve to only add credibility and legitimacy to what truly goes on. Apartheid walls, shouting matches in student governments, boycotts against chickpeas, celebrations of soda machines, and the list of other wasted investments of time and energy goes on and on.

Whether a BDS resolution gets passed or not, the upper leaderships of these universities will never actually boycott the Jewish State. On the flip side, do the majority of student populations actually remember which innovations Israel created for them as we so desperately try to preach? What I am getting at is that the “battle” on campuses is not about bringing any tangible results, but rather it is a war over ideas and perspectives.

A war of ideas is not necessarily a bad thing, and it is not new to dorm rooms and academic quads. Where the problem exists and seems to worsen each year is in the hyper-polarization of the Israeli-Palestinian conflict, where rational dialogue and honest academia have disappeared. In nearly every political science class I have taken at my college, the professor has indicated from the onset that the conflict would be off-limits. In these instances, I’m not too sure the professors are the ones to blame, but rather I point to the dominating atmosphere inside and outside the classroom: an atmosphere in which the term anti-Semitism is thrown around willy-nilly, in which conversations must tip-toe around core issues and individuals hold back from expressing their truest convictions so as to ensure not offending anybody, and an atmosphere that fosters at times an intensely passive-aggressive approach and at other times an overly-aggressive approach towards advocacy for or against Israel.

Where does that leave you- whether you are an incoming freshman or an experienced upperclassman- who is eager to get involved yet put off by the status quo? My advice is to be more selfish. Do not always dress for battle and try to convince as many people as possible that your opinions are right. Strive to be a force for dialogue, and absorb as much from all angles as you can.

The many, intertwined conflicts of the Middle East contain so many nuances and complexities that for a twenty-year-old student to not shift his or her views on a particular topic throughout college would signal arrogance and immaturity. I am not suggesting that you abandon the values and narratives that have been instilled within you, but it is important to challenge everything you hear by exploring different, conflicting, and sometimes uncomfortable voices. Do so by reading articles, following dozens of different figures on Twitter, and attending conferences. And if you’re feeling extra bold and authentic,  get an internship in a relevant organization or even travel to the region.

There are many issues around the world that you can make tangible impacts on- i.e. organizing walkathons for cancer research or fundraising for the humanitarian disaster in Syria- but you are not going to solve the Israeli-Palestinian conflict from your college student center. What you can do is enlighten yourself with knowledge and experiences, and foster others around you to do the same.

During my freshman year, I decided to start a pro-Israel group with a few other students. On a campus in which there were no other organized student groups focused on Israel or the Middle East, I became accustomed pretty quickly to the hypersensitive atmosphere just from some of the feedback I received after having the word “Zionist” on a poster.

After refining our approach and strategy (most of which is broken down above), the club solidified its place on campus as a force for dialogue. Yes, we do identify as a pro-Israel club. Yes, we do send students to AIPAC and J Street conferences alike. And yes, we do seek to engage directly with differing opinions rather than to confront them with aggression.

While I have been fortunate to not study at a university that is plagued with “die-ins” and other demonstrations that do not portray any aspect of the conflict with justice and accuracy, our club has internalized the responsibility of addressing the region’s issues with respect, maturity, and intellectual open-mindedness.

So my opinion and best advice is to take advantage of the vast resources around you on campus, namely the thousands of other smart students and staff. There will not be many other opportunities in life in which you are surrounded by so many educated and open-minded people. And try to avoid or minimize the stupidity that remains.

Because if you and your fellow classmate cannot peacefully and respectfully engage each other about the Israeli-Palestinian conflict from thousands of miles away, how do you expect our leaders to do the same?

About the Author
Adam is a senior at Colgate University and recently completed a semester at the Hebrew University in Jerusalem. He helped found Colgate's pro-Israel advocacy group and is studying International Relations and Economics.
Related Topics
Related Posts
Adam Basciano
Comments