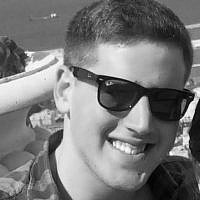 The Blogs
Avi Thomas
Apply for a Blog
Advertisement
Please note that the posts on The Blogs are contributed by third parties. The opinions, facts and any media content in them are presented solely by the authors, and neither The Times of Israel nor its partners assume any responsibility for them. Please contact us in case of abuse. In case of abuse,
Report this post.

No one likes new beginnings. New places can always be a bit terrifying and uncomfortable. From the second you come out into the world, you cry in fear of what is ahead. Now imagine the same experience, 18 years later.

You’re a college freshman, just said goodbye to Mommy and Daddy. You pretended to be strong and not cry when their rented car leaves the dorms on their way back to New York, and as you turn around to walk back in it hits you. This is it.

Being a freshman is an interesting experience that can dictate how the next 4 years of your life will play out, and being a Jewish freshman has its added “perks”. There is something about Jewish people that connects them unlike any other religion in the world. You can be walking down the street and see someone with a Magen David shirt, and automatically you know that if needed, the stranger will help you out.

Being on campus with so many organizations such as Hillel, Chadad and JSU, really helps Jewish students settle in quickly and feel at home. In my first weekend at Florida Atlantic University I was invited to Shabbat dinner by one of the staff members at Hillel, and attending it helped define my next 4 years. At dinner I was able to connect and meet different students who shared the same moral values as I did, students who shared a passion for both Judaism and Israel, and with whom I felt close with almost instantly.

As someone who has served in the IDF, I know the meaning and the importance of camaraderie and brotherhood. Having someone there with you through the good and bad times can help make the direst situations a bit sweeter. That’s why joining AEPi was one the best decisions I ever in my entire life. Being in a fraternity that was established solely so that Jewish students have the ability to socialize and share their passion for Judaism seems almost too good to be true, but it’s not. From the first second of receiving a bid, strangers you just met a few days ago invite you to their house, introduce you to new people, and treat you as one of their own. Kids who grew up in the US their entire lives have giant Israeli flags hanging in their room. Why? Because they’re Jewish, and Israel is the Jewish homeland.

Some may come out and say that such organizations such as AEPi and Hillel may promote discrimination among student as they cater only to the Jewish community, however I’ve found this claim to be the most ridiculous one so far. If you attend a Shabbat dinner you will find many non Jewish peers sitting quietly soaking in the sights and sounds, eager to learn what is so special about being Jewish that brings so many strangers together. AEPi has brothers who are not necessarily Jewish, however they share the same believes and morals and understand the importance of setting an example for others.

I am proud to walk down the Breezeway (main walkway in school where most students pass through on a daily basis) and such diversity in our school. On a daily basis you can see people tabling causes such as charities and fundraisers, right alongside students advocating Israel and AEPi. I am proud to be a Jewish student on campus, setting an example and leading the way for many others that will follow in my foot steps. I am proud to be part of a Jewish fraternity that holds the highest overall GPA on campus. I am proud to be able to walk around FAU and see Israeli flags in different parts of the school.

To all the Jewish students who aren’t sure or are a bit hesitant: I urge you to go to your local Hillel and introduce yourself. Say hello, see what’s up. You’ll find that some of the best friends you will meet in college will be the fellow students you meet at Hillel and Chabad. Whether it’s signing up for birthright, getting the rundown on events, or just hanging out to kill time until class. Do it. I have never heard of someone who tried to become involved in the Jewish student community and didn’t love it. You won’t be the first.

About the Author
Avi Thomas grew up in Israel and Memphis, TN. After graduating he went on to serve in the IDF both as a Air Force flight cadet and special forces medic in the Maglan unit. He now am studies Political Science at Florida Atlantic University in Boca. He is an Emmerson fellow for Stand With Us and is very involved in Israel advocacy on campus.
Related Topics
Related Posts
Avi Thomas
Comments