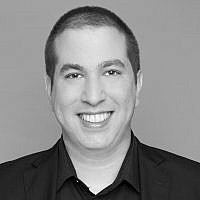 The Blogs
Noam Furer
Apply for a Blog
Advertisement
Please note that the posts on The Blogs are contributed by third parties. The opinions, facts and any media content in them are presented solely by the authors, and neither The Times of Israel nor its partners assume any responsibility for them. Please contact us in case of abuse. In case of abuse,
Report this post.

When Yitzhak Rabin talked about being a soldier in the army of peace, it is doubtful that one could imagine a day that an Israeli soldier and a Palestinian boy would sit on the light rail in East Jerusalem and dance together to a musical piece. What might sound like a nightmare to the radical extremist is the everyday reality shown on TikTok. Can the formula for peace between Russia and Ukraine be found in a short and bouncy Chinese app, which manages to conquer the time and energy of youngsters and operates as the modern “opium for the masses”?

Since the beginning of the fighting in Ukraine, TikTok became a weapon in the war on public opinion that Ukraine and Russia are waging against each other and has become the primary news source for young people observing the conflict by their phones. Ukrainian TikTokers share their experiences and stories, present destruction in the urban landscape of Ukraine, and spread images of Russian soldiers being taken captive and humiliated. These videos are distributed online and receive millions of views and comments.

Because much of TikTok’s content reaches users through the network’s sophisticated algorithm, which learns what people like and automatically submits it to them, its responsibility becomes significant in a time of military conflict. For example, an old video of a Palestinian girl named Ahed Tamimi tries to humiliate an IDF soldier, undergoes a process of Ukrainianization, and became an original video from the last days. The fiction mixed with truth in this virtual chess game.

For the past two years, TikTok has been taking over most youth’s time and energy, fulfilling an essential role in their lives and playing a significant role in their access to information and news. TikTok enables young people to share opinions and values, start conversations and build relationships. Because the app has no boundaries, it connects people from different places. Jews and Arabs, Israelis and Palestinians, Russians and Ukrainians. Most of the content in TikTok is not harmful but empathetic. It takes part in the most basic brain functions that contribute to social networking: oxytocin, dopamine, and cortisol.

Young people on TikTok create artistic, topical, and musical content, participate in humorous sketches, give speeches, or create duets – and in this way, an amplifier to those who usually could not raise their voices. Through a spectacle of fun, fashion, and humor – TikTok creates a unique culture around positive political issues like the war on racism, equality of opportunity, and feminist issues.

Can TikTok’s open structure, which allows for more familiarity with the other, become a tool that will encourage coexistence among young people in divided societies and conflict zones? Would it change humanity like art and music has done in the past and succeed in connecting strangers, cultures, and even enemies? One thing is clear, TikTok’s potential to reshape the future, build a bridge, and generate understanding and empathy between different peoples, is enormous. An open, innovative, and flexible algorithm, which allows young people to be exposed to new ideas and teaches them to listen to the attitudes and opinions of people from different cultures, is the material from which peace is made.