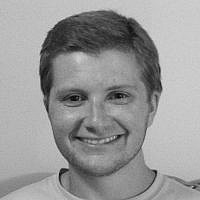 The Blogs
Benjamin Larrabee
Apply for a Blog
Advertisement
Please note that the posts on The Blogs are contributed by third parties. The opinions, facts and any media content in them are presented solely by the authors, and neither The Times of Israel nor its partners assume any responsibility for them. Please contact us in case of abuse. In case of abuse,
Report this post.

Of course we can. Anti-Semitism is rampant upon college campuses. Students will often have this presented as anti-racism or anti-Zionism, but this is merely the mask of anti-Semitism. Don’t believe me? Ask any of the numerous Jewish Fraternities that awaken to see Swastikas had been painted on their houses the night before. Anti-Semitism is alive and well, as are the valiant efforts to combat it, but can we really say that all anti-Israel activists and criticisms are anti-Semitic? There are many zealots opposed to the idea of a Jewish State, yet many are Jewish themselves.  Can we really confront ALL BDS activists with the charge of racism?

Many activists passionately criticize the Jewish State, yet what drives them is not an ideal vision of an improved nation of Israel, but a passion in the concept of nihilism. The idea that there are no exceptional or moral ideas or countries. They believe in nothing.

To begin, let me reaffirm that the VAST majority of atheists are intelligent and decent people. Many of whom are my dear friends. Sadly, a select minority adopt atheism out of the belief in the inferiority of and the eventual elimination of religion. Take the Instance of a Jewish State. Zionists clearly recognize that Israel is a nation that reflects the Semitic peoples that have continuously lived in Israel for 3,500 years. Many atheist students misinterpret this term as a government of religious law, and since religious ideals are harmful, the Jewish State must not exist.

You’ll notice these activists never espouse what they would replace the Jewish State with. A Hamas controlled Sharia-Law state of Palestine would almost certainly be the result if Israel ceased to exist, but this is never is a stated concern of BDS. Nihilism is only concerned with the meaninglessness of the existing paradigm.

Another plank adopted by this sect of nihilists is moral equivalence and relativity. In short; there are no superior values or actions, except those that allow them to place Israel in a moral vacuum. To them, they cannot accept that Israel’s army is a moral force for defending the only Free State in the region. This often why you here activists justify Hamas suicide bombers or equate them to the Israeli Defense Forces. I once confronted a student and stated that Israel is only defending itself, she retorted that there is no difference between self-defense and force, both are to be condemned equally.

The terror tunnels utilized by Hamas to ambush civilians in Israel in Operation Protective Edge are presented as a right of resistance. In another instance, I quoted Martin Luther King Jr.’s call for peace and love to overcome darkness and hate, only to have a colleague actually OBJECT and respond that while peace may be an avenue for some, resistance and violence is an avenue for others (which would explain her adoration for Malcolm X). The ideology of those that view Israel’s defense against genocidal forces as a zero-sum game, can be deduced as one that rejects the idea there is a fundamental morality in our actions.

The end game of those in question is the outright rejection of any inherent truths or facts of the conflict itself. The following is the ultimate test of how to deduce the ideology of those that are inclined to be anti-Israel: Ask them literally ANYTHING about Hamas’s actions in combat. Most would, at the very least, contest the designation of Hamas as a terrorist group. Many leaders of the BDS movement go so far as to deny the Hamas practice of staging attacks from urban areas to multiply civilian casualties, (even though Hamas’s leaders literally brag about this practice).  An amusing activity is watching an activist’s face contort when you ask them to condemn Hamas for their persecution of the gay community in Gaza.  You’ll be lucky to even receive an answer. It’s soon evident that rights only are significant when they can accuse Israel of having none. They cannot afford to analyze Hamas’s violent history and terrorist beliefs objectively. Doing so would shatter their self-constructed paradigm of Israeli aggression and force them to recognize inherent facts of a decades-old conflict.

Whilst the anti-Israel movement on colleges is certainly filled with anti-Semitic actions, this charge is not a silver bullet for combating anti-Israel activities. How can one be accused of holding bigoted beliefs when they are committed to a nihilistic philosophy of no beliefs?  If we wish to combat the misinformation presented on campuses, the moral abyss of nihilism can only be contrasted with a firm summit of ideals and beliefs.

Those occupying the nihilistic crowd will almost never be persuaded by objective facts. I firmly believe the majority of students may still be persuaded to support Israel. This audience beliefs in an Israel that has right to defend her innocents from the guilty, that recognizes Israel as the only free nation in the region, that outright rejects violence against another people, that seek to criticize Israel only to improve it, not eliminate it, and certainly those that believe in the idea that there are fundamental rights and wrongs in this life. So before you confront a fellow collegiate about their beliefs, firmly grasp your own convictions for the benefit of the Jewish State that you seek to defend.

About the Author
Benjamin is a senior at the University of South Florida, and is the Campus President of Christians United For Israel (CUFI), as well as an Emerson Fellow.
Related Topics
Related Posts
Benjamin Larrabee
Comments