The Blogs
David Bernstein
Free speech proponent in the Jewish world
Apply for a Blog
Advertisement
Please note that the posts on The Blogs are contributed by third parties. The opinions, facts and any media content in them are presented solely by the authors, and neither The Times of Israel nor its partners assume any responsibility for them. Please contact us in case of abuse. In case of abuse,
Report this post. 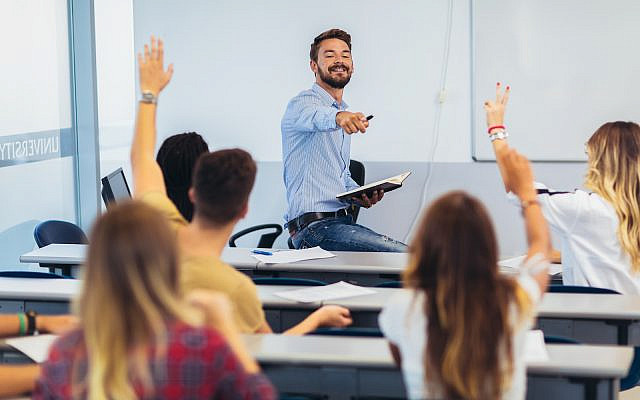 This past week, a school administrator in Texas was heard on tape saying that a new law forces teachers to provide “opposing” views on the Holocaust. The Texas law mandates that controversial issues be taught from “diverse and contending perspectives without giving deference to any one perspective.”

I immediately received messages asking whether the Jewish Institute for Liberal Values’ (JILV) efforts to open up the conversation on sensitive topics encourages Holocaust denial:

It should go without saying that it is absurd and outrageous to teach opposing opinions about whether the Holocaust, or slavery for that matter, happened. They are historical facts. There are, however, completely valid differences of opinion about how and why these monstrous evils were perpetrated, just as there are valid differences of opinion about the extent and impact of systemic racism in America today. “The dispute about the interpretation of events is completely legitimate, but the dispute about the existence of events is either dangerous or stupid or both,” stated Rabbi David Wolpe.

“The way that Holocaust education is taught in America is, it talks about systems of oppression, it talks about dehumanization….I don’t even know what it means to just teach facts. Facts don’t mean anything unless they’re contextualized in a way of understanding that particular era…when you begin to ban all these approaches to understanding history, you are banning the way we teach Holocaust education in America today.”

We should indeed “contextualize the facts” of the Holocaust or the facts surrounding any significant historical event for that matter. But we should contextualize them in ways that allow students to wrestle with alternative perspectives on why these events occurred. There are, in fact, major disagreements  among both scholars and educators about Holocaust pedagogy as well as a wide range of teaching practices.

In the mid-1980s, I had the honor of studying with the Philosopher and Holocaust survivor Emil Fackenheim at Hebrew University of Jerusalem, who argued until his death in 2003 that the Holocaust was a unique and unprecedented event in human history. That notion of uniqueness has always been hotly contested by other philosophers and historians. It’s a debate I had on numerous occasions during and after college. Having that discussion elevated, not demeaned, the importance of the Holocaust in our consciousness.

In 1996, Daniel Goldhagen wrote the explosive book Hitler’s Willing Executioners: Ordinary Germans and the Holocaust, wherein he argues that most ordinary Germans were “willing executioners.” He advanced the notion of “eliminationist antisemitism” in German political culture through the centuries leading up to NAZI Germany. A year later, the German historian Hans Mommsen argued that Goldhagen failed to appreciate the varied forms of German antisemitism and rejected Goldhagen’s “unilinear continuity of German antisemitism from the medieval period.”

It would be perfectly appropriate for a teacher in a high school Holocaust studies class to expose his or her students to both Goldhagen’s and Mommsen’s arguments about the role of ordinary Germans and allow students to discuss and reach their own conclusions. I would not want my kids’ teacher to impart the Goldhagen thesis as the only acceptable interpretation.

Similarly, in the historical discussion over slavery, there are numerous disagreements over, for instance, the primary reason Abraham Lincoln initiated the Civil War. Was it to end slavery, as some assert? Or was it to save the Union, as others argue? How do we weigh the evidence? A good history teacher would help students understand the debate, not provide them a single answer.

On the recent row over the Texas Holocaust education pronouncement, Rabbi Danya Ruttenberg, a prominent progressive voice, stated “Just like there is no historical debate about the historicity of the Holocaust, “there are also no ‘both sides’ to American chattel slavery, to systemic racism, to lynchings and land theft and Indigenous genocide.”

If Rabbi Ruttenberg is referring to systemic racism as manifested in Jim Crow laws, there’s no argument there. But if she’s speaking about systemic racism as a singular explanation for disparities among groups in contemporary America, that should be regarded as a completely legitimate topic for debate and disagreement.

Obviously, pre-civil rights America was replete with systemic racism. It was written into the laws of the land and brutally enforced. But in the wake of the passage of the civil rights laws, the role of systemic racism becomes murkier. I believe that there is systemic racism in specific institutions, but I do not agree it is embedded in every nook and cranny of contemporary American life. Those who assert the ubiquity of systemic racism often demonize any other explanation for why there are differences in group outcomes and generally seek to shut down the conversation. It’s as settled in their minds as the occurrence of slavery itself. But it’s not settled in the minds of many other people.

There can be and often is more than one cause for disparity among groups. Why should kids – and society – have to settle with one favored explanation? If we can’t diagnose a problem in all its complexity, we won’t be able to solve it.

Just as we debate whether ordinary Germans were willing executioners and why Lincoln initiated the Civil War, we can and must debate the prevalence and meaning of systemic racism in America today. In the meantime, the historicity of the Holocaust will withstand a few idiots in Texas who can’t tell the difference between fact and opinion.