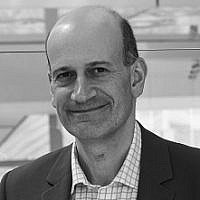 The Blogs
Adam Rosenthal
Apply for a Blog
Please note that the posts on The Blogs are contributed by third parties. The opinions, facts and any media content in them are presented solely by the authors, and neither The Times of Israel nor its partners assume any responsibility for them. Please contact us in case of abuse. In case of abuse,
Report this post.

Women who carry these mutations are offered interventions to reduce their risk of cancer. Options include having the ovaries and fallopian tubes removed (salpingo-oophorectomy), having the breasts removed (mastectomy) or having annual breast screening by MRI or mammography.

The BRCA genes can be inherited from either parent, which is why a family history of breast or ovarian cancer is seen as an important marker for cancer risk. People with a strong family history of relevant cancers can be tested to see if they carry these mutations. Criteria for testing include assessment of how many relations developed cancer before certain ages, and how closely related they are.

However, many people are not aware of their family history or its significance, so don’t seek advice. In addition, it is possible to carry these mutations without having a close relation who has had cancer. This means some people who would not be eligible for NHS genetic testing will nevertheless carry faulty BRCA genes.

The Ashkenazi Jewish population is known to contain a particularly high number of mutation-carriers; about 1 in 40 carry BRCA mutations, compared to 1 in 800 in the general population.

But what if we were to offer genetic testing to everyone in the UK Ashkenazi Jewish population? What impact would this have on this high-risk community? And would a major roll-out via the NHS become a financial burden?

Research co-funded by women’s cancer charity, the Eve Appeal, and undertaken by the Women’s Cancer Department at University College London sought the answers to all these questions. This research also wanted to establish whether it would be better to offer genetic testing to the whole Ashkenazi Jewish population, rather than just those who have a strong family history of cancer.

The findings were significant – certainly in terms of identifying genetic mutations in the high-risk community – as more than half (56%) the people carrying a gene mutation identified through the population testing would not have been identified through family history based screening.

The model used in the study indicates that if 71% of the 114,400 eligible women were tested, there would be 276 fewer cases of ovarian cancer and 508 fewer breast cancers in this group.

So surely such figures could justify a cost-effective gene testing programme? If we were to test all Ashkenazi Jewish women aged 30 and over, rather than just those with family history, not only could we reduce the number of ovarian and breast cancers that occur in the Ashkenazi Jewish community; we could save the NHS £3.7 million in the process.

So whilst taking research from the lab-bench to the hospital bedside takes time; this is a step very much in the right direction. Let’s hope that on-going research helps yield even more positive results– because ultimately we want to endure less heartbreak and ensure that we save significantly more women’s lives both now, and in the future.