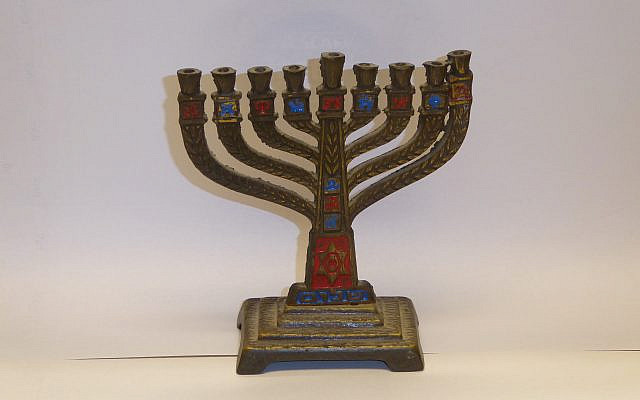 All Over For Another Year (Photo by Roger M. Kaye)

“Hanukkah is when we celebrate the power of spirituality to overcome the physical, and that is the story of the Jewish people in exile,” said Rabbi Eliahu Hamra, head of the AMIA Communities Committee in Argentina. (The Jerusalem Post December 30 2019)

When, in the second century BCE, the Land of Israel was occupied by the Seleucids (Syrian-Greeks) they banned all Jewish observances and tried to force Greek culture and beliefs on the population. A small band of rebelling Jews, with few arms. that should have been no match for the powerful occupiers, were able to defeat the Greeks and drive them from the land. The Holy Temple in Jerusalem was reclaimed, the altar cleansed and rededicated; ‘rededication’ in Hebrew is, of course ‘Hanukkah’.

The Jews were led by Judah the Maccabee. Most accept that his name comes from the Aramaic maqqəḇa, “the hammer”, in recognition of Judah’s ferocity in battle. Others suggest that Maccabee is an acronym for the Torah verse that was the Maccabees’ battle-cry, “Mi chamocha ba’elim YHWH”, “Who is like You among the heavenly powers, Lord!”.

The land was reclaimed not by spirituality, not by asking nicely, but by force of arms, good old-fashioned violence. The enemy was defeated and driven out.

Unfortunately, the true message of Hanukkah was lost on the Jewish people in exile. From pogroms in Russia to the horrors of the Holocaust, Jews, with a few notable exceptions, did not fight back, did not follow the Maccaabee’s example. They tried to placate their tormentors and went quietly to their deaths.

The esteemed rabbi may not have noticed but the Jewish people are no longer in exile, or at least not those who have chosen to live in the Land of Israel. Why any Jew should choose, willingly, to remain in exile in a mystery to us Israelis.

Rabbi Eliahu Hamra is sitting in exile in Argentina of all places. Argentina, where Anti-Semitic incidents increased by 107 percent in 2018 over the previous year and the situation has become worse in 2019, with physical as well as online attacks. Does he not listen to what he himself is saying?

So, the real message of Hanukkah is simple. End your years in exile, and join your fellow Jews in the reborn Land of Israel. And, wherever you meet violent Anti-Semitism, defend yourself as did the Maccaabees.