The Blogs
Shimon Apisdorf
Apply for a Blog
Please note that the posts on The Blogs are contributed by third parties. The opinions, facts and any media content in them are presented solely by the authors, and neither The Times of Israel nor its partners assume any responsibility for them. Please contact us in case of abuse. In case of abuse,
Report this post. 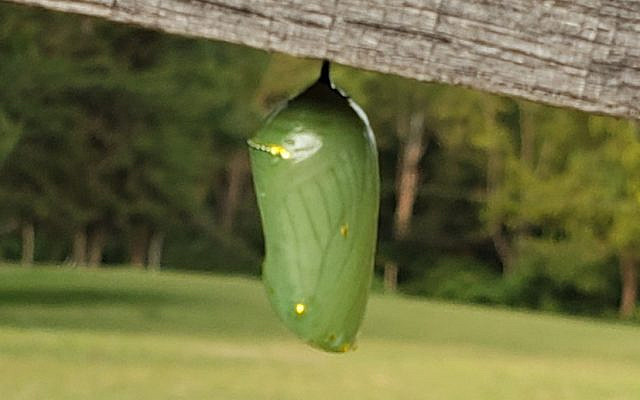 Let’s assume that Jerusalem is the eye of the universe; the beating heart and soul of Am Yisroel, and all mankind.

From Jerusalem the world was created.

From the dust of Jerusalem man was formed.

And, both the first lech lecha, and the final lech lecha of the Akeida—the formative spiritual bookends of Avraham’s becoming the progenitor of the Jewish people—were rooted in Jerusalem.

And so, when it comes to the heart and soul of mankind, and particularly the Jewish nation, it’s the land of Israel, and particularly Jerusalem, that must always be the central focus of our collective thoughts, feelings, reflections, and teshuva.

Does God Speak Through the Headlines?

From last Pesach until today, isn’t that the question we’ve all been asking?

Wouldn’t it be great if God would just tell us what’s going on?

It turns out, that to an extent, even a significant extent, He does. In his essays on Rosh Hashanah, R. Avigdor Nevenzal says that—

“Though we don’t have prophets like we once did, nonetheless, we have something similar: Newspapers, and the daily news! This is the word of God being delivered to us regularly, every day, in the form of headlines and news broadcasts.” (Sichot Yom Kippur, 101)

In a similar vein, in 1948, just one month before the establishment of the State of Israel, R. Eliyahu Dessler wrote a letter in which he addressed the concept of the Shofar of Eliyahu that will be sounded as the geula approaches. At that time, R. Dessler was reflecting on the Great Depression, the Second World War, and the rise of Communism. He says that those events were nothing less than the “voice of Eliyahu.”

Yes, Eliyahu will sound a shofar, and, like on Rosh Hashanah, we are called upon to listen to what’s being said, though Eliyahu’s shofar isn’t made from a rams horn, but rather from great events with which we are confronted. Clearly, a global pandemic in whose midst we are all reeling, is, in some way, the shofar, and it’s speaking to each of us.

“The final teshuva is not possible accept for the person who hears the voice of Eliyahu speaking to him, which is Eliyahu coming personally to him.”  (Michtav M’Eliyahu 2:209)

With this in mind, I would contend that if, from Rosh Hashanah until Shmini Atzeret, the entire land of Israel is in lockdown, and if Jerusalem, the Kotel, and Har Habayit are in lockdown, then could there be a shofar louder than this?

Not Just Another Year

Shabbat is a day unlike any other.

Sunday is a day, Monday is another day, Tuesday is yet another, and all six days of the week are more or less another version of the same thing. The seventh day shatters the template. Shabbat is an altogether different reality. It may start and end with sunset, but it’s essence is elevated, sanctified, and imbued with ohr Hashem in a way fundamentally unlike all the other days.

The same is true with the nation of Israel.

There are 70 nations. Each made up of people created in the image of God, each with different characteristics, yet all cut from the same fabric. Am Yisroel shatters that template. It’s not one of the seventy. Inside, in the deepest neshama of Knesset Yisroel, we are different. The same is true with the Land of Israel—the eyes of Hashem your God are always upon it—and the same is true of Jerusalem, it’s anything but just another city, and the same is true of Rosh Hashanah.

Rosh Hashanah is not the beginning of another year. This Rosh Hashanah, like the very first, launches the creation of a new reality; a reality absolutely unlike any that has ever existed before.

Once Upon a Time…

… there were six days of creation.

In World 1.0, the tikkun, the repair and completion of the world, could have been accomplished in six days, and then been crowned with the unique dimension of Shabbat, but that’s not how things worked out.

Now, in World 2.0, what could have been accomplished in six days, takes place over six millennia. The Ari z”l teaches that within each year there is a particular tikkun, or set of tikkunim, that are unique to that year. It is as if all of history is waiting for the tikkun of each year—indeed each month, week, day, hour, and minute—to be present and actualized.

There has never been a Rosh Hashanah like this one.

Never, it seems, potential for global awakening (wokeness?) like there is now.

For a long time, the world has been increasingly focused on global warming and climate change. There is a movement to create a global Bill of Rights. And now we are dealing with a global pandemic. That word, global, does it not seem that if God is writing the headlines, then the word that He has chosen to splash across the front pages of our consciousness is GLOBAL?

Is it just me, or do you also think that we are supposed to be thinking globally?

We are all accustomed to Elul and Rosh Hashanah as times of thoughtful reflection about a whole host of things. Perhaps this year we aren’t supposed to think about this, that, or the other thing, but about Everything. Isn’t that global? Global includes the entire planet. Every country and people; every individual, family, neighborhood, and city: Everyone, and every thing.

If we reflect on the Rosh Hashanah prayers, it’s clear that this is truly a global day. Rosh Hashanah may be the first of the Ten Days of Teshuva, but the details of teshuva, like those that fill the Yom Kippur Machzor, are absent on Rosh Hashanah.

Rosh Hashanah is about creation, God, all mankind, the place of Am Yisroel in the world, and all existence. That’s global, wouldn’t you say?

Here in Israel, starting with the eve of Rosh Hashanah, we will be entering an extended lockdown. A painful, traumatic lockdown that will result in deep economic and emotional hardship. Yet, locked down we will be. Perhaps we should think of lockdown as a cocoon, and perhaps within the quiet confines of that cocoon we are being asked to rethink, yes, everything.

The value of human life.

The doors to our synagogues have been slammed shut. As have the doors to our schools, our parents and grandparents homes, and the doors of all those El Al planes that once brought so many to Israel. According to the headlines, this is how it’s supposed to be this year. This utterly unique global year.

No more business as usual.

No more life on auto-pilot.

It seems that we are supposed to rethink and recalibrate everything.

And from where? From what vantage point?

From a cocoon called Rosh Hashanah.

Why go to shul this year?

Isn’t the inner essence of what we need to hear—the voice of the shofar—right here inside our private cocoons? Aren’t we being locked down, again, for a reason?

To me it seems that while we are locked out of so many of the places we so love, that there remains one place we can never be locked out of: our hearts. Perhaps we have spent so much time, and invested so much focus elsewhere, that we have lost track of where our focus, our consciousness—our hearts and souls—truly need to be.

Our hearts are our inner cocoons.

The place of our deepest essence; our truest, simplest, most genuine selves.

Our deepest longings and highest aspirations.

It’s from there, that place where only I dwell, alone with my soul, and with God, that the most real, global change can take place.

The Gemora in Brachot tells us that there are two ways to gain citizenship in Tzion, in Jerusalem: “One who lives there [is a citizen] as well as one who longs to live there.” Is there any of us that doesn’t pray daily for Jerusalem? That doesn’t utter the words Next Year in Jerusalem at the conclusion of our seder, and under our chuppa?

Deep down, we are all Israelis, all Yerushalmim.

We are all Jews; priceless, irreplaceable instruments in the great symphony of Am Yisroel, indeed, in the symphony of all creation. Imagine an orchestra in which every player is a virtuoso, and every one-of-a-kind instrument was crafted by a legendary craftsman. That’s us, that’s Am Yisroel.

I believe that this year, we are all being asked to play in the seclusion of our own cocoon; to retune our instruments, and perhaps to even exchange our inner violins for a different instrument altogether.

Two Shofars and A Poem

Regarding this, our sages say that the inner meaning of enter your rooms, is enter the inner rooms of your heart.

This year we will hear not just the voice of a ram’s horn, but hopefully, the “still silent voice,” of an inner shofar.

I’d like to conclude by sharing a poem with you, a poem undulating with global murmurings: Listen …

There is the person:

There is a person that sings the song of his soul:

And within his soul he finds everything;

And there is the person that sings the song of the nation:

He departs the confines of his personal soul;

for he does not find it to be sufficiently broad;

nor does it provide an ideal sense of inner peace.

For powerful heights, and cleaves with a refined love,

to the collective totality of Knesset Yisroel,

and with her, he sings her song, suffers her travails, and

about her past and future.

And there is the person whose soul expands wider still:

Transcending the boundaries of the nation of Israel;

to sing the song of all mankind.

His soul progresses and broadens; within the collective glory of man created in His image;

he longs for its’ collective destiny, and anticipates its’ highest completion:

And from this source of life itself he draws the comprehensive span of his thoughts and contemplations;

his deepest yearnings and visions.

And there is the person who, broader and higher, rises still:

until he is unified with the entirety of all existence;

with all creatures, all dimensions.

And together with all of them he sings.

This is the one that contemplates that special song (perek shira) each and every day,

for this is the one that is guaranteed to be part of the world yet to come.

And there is the person who soars with each of these songs blended together as one:

all of them, together, singing their song;

each giving to the other vitality, and life.

The voice of joy and rejoicing.

All of them , together, harmonized within him:

At every time, every hour.

(From the writings of Rav Avraham Y. Kook)

May each of us, and the world, be blessed with health, life, personal metamorphosis, and global transformation.

About the Author
Shimon Apisdorf has authored ten books that have sold over a quarter million copies and have won two Benjamin Franklin awards. His family moved to Israel in the summer of 2012. His new website is currently under construction.
Comments