Our kibbutz was founded during one of Israel’s historical pioneering campaigns on Yom Kippur eve, 1946. The operation would come to be an important chapter in the history of the Negev Desert, and of Israel, in general, known as “The 11 Points” . (Note: The link here is old, written for the jubilee celebration 20 years ago, but the history is the same and I preferred the way this was written to the less inspiring Wikipedia entry).

Last night, as those of the original pioneers still left reach the ripe old age of 90, we celebrated our 70th year anniversary. Our community designated substantial funds for this entire 70th year, dedicated to activities that would help celebrate, but also unify and heal the people who live here, and have been through so much. We held “Children’s Day,” a Community Mosaic Project, and special, highly subsidized kibbutz trips, just to name a few.

And finally, at the end of the Sukkot holiday, we culminated our year-long celebrations with a grandiose production which had been planned from the beginning of the year, and has been actively in the making for the past few months. Based on the history of Nirim, interspersed with songs, dances and local anecdotes and flavor, we danced, sang and joked our way through the ups and downs of life in this little corner of the world.

We hired a professional director, choreographer, and musical director. A huge stage was erected in the heart of the kibbutz, including tens of projectors, two side screens for live streaming and an enormous LED screen in the center for audio-visuals that had been filmed throughout the year, as backdrop. The performers, ranging in age from 4-90, were all members and residents of our constantly evolving and blossoming community. Anyone who wanted to, could have a part in this extravaganza. In addition to weeks of rehearsals, the final five days leading up to the celebration were spent congregating on the lawn patiently waiting on chairs and blankets for our turns on stage, until the wee hours of the mornings. There were microphones to be balanced, last minute adjustments and finishing touches on the performances to be made. We were provided with dinner, running coffee and cake. The process was magical, providing us with priceless opportunities to interact with people in our community with whom we don’t usually, and invest quality time with our neighbors, for our neighbors. It reminded me of why I love this place, and why, like the others who live here, we are willing to raise our families on Nirim, despite the threats and dangers.

There were around 1,000 people in attendance. First a delicious dairy dinner on the lawn, and then, the performance. It wasn’t “Broadway.” It couldn’t be considered “quality theater.” But it was “us.” It was fun, and authentic, and a true celebration of our existence, done as only a community like this, can. 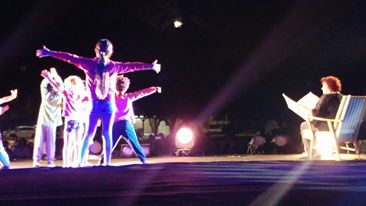