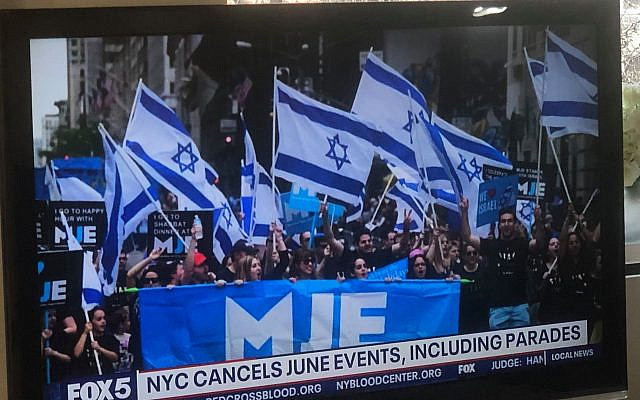 Special thanks to Rabbi Ezra Cohen of the Manhattan Jewish Experience for his help with this article.

After recently helping dozens of members of the Manhattan Jewish Experience community prepare for their Seders alone, and a month into a new world of isolation and social distancing, we received an email with the subject line: “The Mayor Cancels Israel Day Parade.” I felt a pit in my stomach, as the reality of not joining together to celebrate Israel began to sink in. For decades, amidst all the divide and controversy surrounding the Jewish State, the parade has been one of the most positive expressions of Jewish solidarity for Israel in the United States.  Since our inception in 1998, MJE has proudly marched every year with hundreds of young Jewish professionals dancing down 5th Avenue signing Am Yisrael Chai. This event has served as a rallying cry for MJE’s unwavering love and support for Israel and an expression of our religious Zionistic orientation.

We are told there will be a “virtual” parade, but assuredly it will lack the energy and inspired emotion of being face-to-face and hand-in-hand with our Jewish brothers and sisters on the streets of Manhattan. So what can we do? How can we recapture that special love for Israel in a socially distanced diaspora?

Israel has already given us the answer. In the last two months, while the world has been on a standstill, something mundane but quite extraordinary has been happening in Israel: roadwork is booming as construction crews take advantage of empty roads and railways during the coronavirus to upgrade Israel’s most congested highways. The Israeli government has injected over one billion shekels into the impromptu campaign and for nearly two months companies have been cramming in the work while the rest of the country is stuck at home. One recruitment campaign is referred to as “Opportunity in the Crisis.” The push to finish projects quickly is hoped to have an immense, long-term positive impact on the economy. In addition, some of the biggest and most crucial projects, like the final stretch of a new fast train between Tel Aviv and Jerusalem or the expansion of a highway in central Israel, will be finished six months to a year ahead of schedule because building has been accelerated during this time of crisis.

Israel’s accelerated road work at this time demonstrates a fundamental Jewish teaching: to find opportunity in life’s challenges and to transform oneself from an object into a subject where one can assert some level of control, particularly in challenging times. For the late and great Rabbi Joseph B. Soloveitchik, this was the impetus behind the modern-day Zionist movement.

On Yom Ha-atzma’ut 1956, Rabbi Soloveitchik delivered his famous treatise on religious Zionism, Kol Dodi Dofek, in which he spoke of God’s tangible presence in modern history, specifically the creation of the State of Israel. In the essay, Rabbi Soloveitchik outlined two experiences of the Jewish people: a national covenant of FATE and a religious covenant of DESTINY. What is the difference between a life of fate versus one of destiny? Fate is uncontrollable, destiny can be directed.

To paraphrase Rabbi Soloveitchik: Destiny in the life of a people, as in the life of an individual, signifies a deliberate and conscious existence that the people has chosen out of its own free will. Slaves merely exist; they anticipate no change in their reality. Free men, on the other hand, expect movement and change in their lives; they aspire to forward and upward movement. The Torah calls upon each Jew to make a choice: To sanctify the Sabbath or desecrate it; to honor one’s parents or disregard them. When the slaves stood at Mount Sinai and said “We shall do and we shall understand” they were making the Jewish vision their national mission, defining themselves as a “kingdom of priest-teachers and a holy nation,” and turning their fate into destiny. More succinctly put, the covenant of fate is imposed; the covenant of faith is chosen. To be born into a particular nation is our fate; to choose an ideal and ideology as our life’s mission is our destiny. The Rav continues and says, The infant about to be circumcised is an object upon whom a ritual is to be imposed (fate); the Bar/Bat Mitzvah and bride/groom and the hundreds and thousands of ba’alei teshuvah in our community who have chosen a life dedicated to the ideals of Torah are transforming from object to subject and actualizing their deepest aspirations (destiny).

So, while it is our FATE that we cannot march in honor of Israel, and we are prevented from traveling to Israel at this time, we can be a people of DESTINY by choosing to connect and contribute to Israel in other ways.  Consider spending some time this week learning more about Israel and the founding of the Jewish State. In doing so, we can better appreciate Israel and understand its complexities. To this end, MJE has launched a series of classes and seminars on Israel – including an interview with Israel journalist and New York Times best-selling author Yossi Klein Halevi. Like other organizations, MJE’s Yom Hazikaron and Yom Ha’atzmaut celebration on Tuesday night will be online, as will be a special Yom Ha’atzmaut prayer service on Wednesday morning (see www.jewishexperience.org) so we can become more soulfully connected to our precious homeland. Being stuck at home affords us the extra time to deepen our understanding and appreciation for what Israel means to us. Take advantage of that extra time this week to get more connected to Israel.