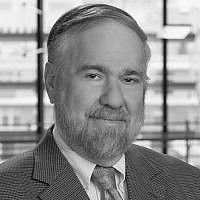 The Blogs
Kenneth Lasson
Apply for a Blog
Please note that the posts on The Blogs are contributed by third parties. The opinions, facts and any media content in them are presented solely by the authors, and neither The Times of Israel nor its partners assume any responsibility for them. Please contact us in case of abuse. In case of abuse,
Report this post.

This is a day to remember. Each year, from generation to generation,

For years I’d make mildly cynical remarks about people who commemorate the Exodus from Egypt by going to a luxurious Passover hotel, where after the obligatory Seder they’d spend the rest of the holiday being plied with food day and night, sitting by the pool pampered to sunny perfection, tour-guided, professionally entertained, or thought-provoked by all manner of scholars-in-residence. Their forebears who wandered through the desert for forty years may have rejoiced in their freedom, but were hardly being waited on hand and foot while sojourning in the lap of luxury.

My skepticism may have been somewhat borne out of a touch of sympathy for the women who’d annually labor through the traditional Passover chores of cleaning the house and cooking a week’s worth of festive meals. But it was more the idea that people who were able to avoid these timeless tasks were somehow missing the point of the holiday.

That all changed last year, when we found ourselves wanting to spend what should be a family celebration with our far-flung children.  Forget the past reproaches. The only way to get everyone together was in a hotel, and what better place than in Israel.

As it turned out, we chose well. The brand new Hotel Galilion sits next to the Hula Valley Nature Reserve between Mt. Hermon and the Golan Heights, a few kilometers south of Kiryat Shemona off Route 90.  This could be the greenest part of the Holy Land, a rich agricultural region with abundant fresh water – and the amazing site where an estimated 500 million birds stop by every May and November during their migration from Africa to Europe and back. In the 1950s the Jewish National Fund drained the marshland around Lake Hula, a breeding ground for malaria-carrying mosquitoes; the unintended consequence was to render a sensitive ecosystem practically extinct.  The valley was subsequently re-flooded and the birds came back, to the delight of hundreds of thousands of tourists who annually visit what is now called  Hula Lake Park (Agamon HaHula).

Passover vacations are at least a century-old phenomenon, dating back to 1915 when several small New York resorts urged patrons to “avoid household cares” and celebrate the holiday “amid delightful country surroundings” or “by the sea.” By the early 1920s, going away for Pesach had become popular for many Orthodox consumers who had begun to realize a modicum of American wealth. Pesach hotels have proliferated worldwide over the past several decades, seeking to tap the growing market of large families that would be unable to gather in a single home.

The United States has the most programs (28 of them in 2016, from California to Florida to New York). You can indulge in a Brandy & Cigar Night in Scottsdale, Arizona; golf at the PGA National Resort & Spa in Palm Beach Gardens, Florida; or listen to a world-class cantor in Westchester, New York.  Some hotels catering to the more Orthodox crowd  have match-makers on site, love boats for shidduchim. Theme nights are also increasingly popular,  especially over-the-top barbecues, where the hotel staff might all be dressed in cowboy hats and bandannas.”

Most American Pesach hotels offer endless snacks in what has now become the ubiquitous “24-hour Tea Room.”  (Rabbi Efrem Goldberg of Miami was recently quoted in the  New York Times that, while visiting the Trump National Doral Hotel’s holiday program, his daughter told him he should vote for Donald Trump. “Why,” he asked. “Because,” she said, “ he has the best tea room in the world.”)

But you could also choose to spend the holiday in Austria, Australia, Canada, the Caribbean, China, England, France, Italy, Mexico, Monaco, Panama, Puerto Rico, Spain, or the Ukraine. Walk if you wish  along the Great Wall of China, watch the Leaning Tower of Pisa drop another millimeter, or simply loll along the brilliantly sun-splashed beaches of the French Riviera.

The idea of being able to avoid cleaning and cooking is of course no small consideration for people who can afford the price, which can be hefty – up to $7,500 per person, for example (plus 25% in taxes and service charges) at the posh Kosherica facility in Palm Beach, Florida.  Rates are more affordable at the lower-end resorts that are more climate-challenged, such as the Hotel Resort & Conference Center in Lancaster, Pennsylvania, where you can book in for as low as $2000 per person.

Seasoned Pesach tourists say it’s often less costly to book a package deal in Israel, including air fare and a good hotel.  There are more than a dozen of them, from Tel Aviv to Tiberias, Jerusalem to the Dead Sea, Eilat to the northern Galilee.

The newest of them all is the Galilion, which just opened this year. What makes it distinctive is the area in which it is situated – relatively remote but just a few hours by car from Tel Aviv and Jerusalem – and its small size and design (just 120 elegantly appointed rooms, modeled after a Tuscany village), at the same time low-key and lavish.  A large conference center features a huge outdoor flat-screen television fronted by a mosaic courtyard.  By mid-summer the hotel expects to have added a full-scale spa with a Turkish bath and state-of-the-art treatment rooms, a hot-air balloon whose basket  will hold up to 30 guests and hover 150 meters over the lush Hula Valley, and an array of boutique shops where they can shop in a decidedly trendy adjacent marketplace.

Perhaps the most fetching part of this year’s Galilion Pesach experience was the cuisine, featuring local produce, prime cut meats and fancy vegetarian dishes, and spectacular desserts.  The Seder meal at the Galilion was fit for a gourmet, featuring “a duet of chicken ballotine (filled with mushrooms, caramelized onions and pine nuts) and veal asado (served with root cream, asparagus and beef gravy).”  The traditional afikoman may still be the prescribed Seder dessert, but it suffered in comparison to the Galilion’s “meringue and vanilla bavaria filled with mango, passiflora and lychee, accompanied by bittersweet chocolate mousse canelé on cocoa and coconut crumble with pink guava marmalade.”  Fancy words maybe, but you had to taste it to appreciate it.

The desserts for the whole week were done by Oshrat, a young pastry chef from nearby Kiryat Shemona, who with her sister Einat appeared to treat each one of their creations as a work of art – with such fresh and vibrant flavors that it’s hard to imagine her cakes and confections are kosher for Pesach. [see photo] Traditionalists would be hard put to find a piece of the old-fashioned sponge cake or sawdust Pesach cookies here.

The Galilion was also unusual among Pesach hotels for providing a daily buffet lunch from 12 noon to 5 pm. Head Chef Avi Cohen, born and raised in the area,  seemed always to be pacing the dining-room floor to ensure that things were going right.

The newly trained young staff was both attentive and interesting in their own right. Faiz is a young Christian lifeguard from Lebanon, who fought with Israel against Hezbollah in the 2006 war;  two of his brothers are now paratroopers with the Israel Defense Forces. “My homeland is lost,” he says. He cannot visit his elderly grandparents unless he meets them in Turkey.  He says he loves Israel, but resents the fact that his adopted country has yet to provide his family with the home it promised after the war.

Marat is a bartender from Russia, where he used to teach English. A Christian with a Jewish wife, he also happens to have an advanced degree in linguistics (Russian and Tatar). Like many other staff members, he’s been in Israel less than a year.

The Galilion’s manager and CEO is Maurits van den Berg, an affable Dutchman who came to Israel 22 years ago.  He specializes in putting the finishing touches on luxury hotels, which he has done in Zichron Yaakov, Eilat, and Jerusalem. Along the way his bosses sent him to the hotel management program at Cornell University. Although his mother was not Jewish, his father and wife are and he might as well be. A few weeks ago he celebrated his only son’s bar mitzvah in Meron. He knows all the rules, from following strict kashrut regulations to providing non-electric room keys for Shabbat to changing the dining-room temperature on yom tov.

He’s just doing his job. The competition for the Passover tourist is so great that virtually any place you choose you’ll likely be coddled – with the hope if not expectation that you’ll come again next year.

Kenneth Lasson is a law professor at the University of Baltimore.

About the Author
Kenneth Lasson is a professor of law at the University of Baltimore. His most recent books are DEFENDING TRUTH: The Quest for Honesty about Jews and Israel, and SACRED COWS, HOLY WARS: Verities and Vagaries in Deciding What's Kosher and What's Not.
Related Topics
Related Posts
Comments