The Blogs
Jeffrey Levine
Apply for a Blog
Please note that the posts on The Blogs are contributed by third parties. The opinions, facts and any media content in them are presented solely by the authors, and neither The Times of Israel nor its partners assume any responsibility for them. Please contact us in case of abuse. In case of abuse,
Report this post. 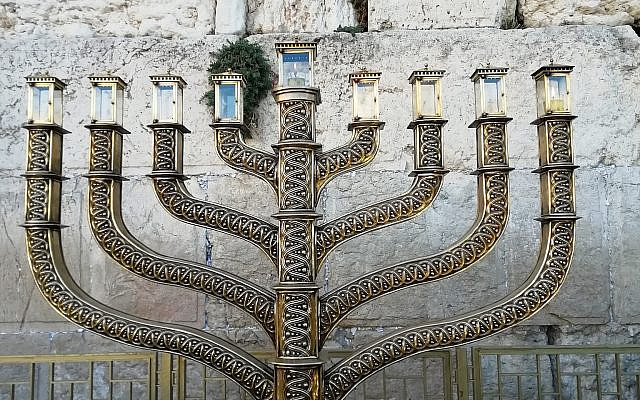 Photo taken at the Kotel on Chanukah 2019 by myself. Am Yisrael Chai.

They say that Sukkot is a time of contemplation about the meaning of life. Chanukah is the festival of light, singing, and rejoicing of the joy of life and religious freedom.

However, I cannot stop contemplating the meaning of life. I just heard the news of the passing of one the great witty philosophers of life, the poet from Ra’anana and Facebook, Carl Hoffman.

And then I heard the news of the senseless bus accident which took the lives of 4 innocent people including a young lady in the prime of her life from our Community in Jerusalem who comes from my home time of Cape Town who grew up in my sister’s community of Constantia. – Hayley Varenberg. At her funeral, her family spoke of her love and concern for others and her resilience in Life. On Chanukah we celebrate the resilience of the Jewish people, it is not only about wishing people a happy Chanukah. Chanukah is a story of setbacks and triumphs, Heroes and loss of life in gaining our Freedom. At the Shiva, Hayley’s father Alan Sevits spoke how Hayley (and I add all us) was a diamond in the diamond in the rough who became polished and shining in Israel.

Before continuing the blog, I want to add we all Diamonds, all precious and I read that were there over 340 deaths on the Roads in Israel in 2019.  This is very sad, and we (including myself) all need to be more considerate, patient and pay much attention when driving and ignore the Phones. Life is too fragile to waste.

So, in their honour and memory that I dedicate these thoughts.

Rabbi Berel Wein writes that the message of Chanukah adapted to the times and has been portrayed in a more universal sense than its original commemoration.

One view of Chanukah it is that is a triumph of religious freedom against Greek Philosophy of hedonism. I recently learned about Socrates, the great Greek Philosopher from Athens in an essay called why I am living? by Rabbi Aryeh Kaplan z”l in his book Encounters. Socrates realised that all the people around him spent their lives in pretty much the same way. They sought fame, riches, and pleasure, yet never asked whether those things were important. Socrates felt it was his duty to try to lead men to a more noble, meaningful life.

What shocked me about Socrates life, that he brought to trial for his efforts and was charged with corrupting the youth of Athens and he found guilty and sentenced to death

I cannot help thinking about the comparison to our times where people are slandered to death for expressing the truth.

In one of the more noble speeches of all time, Socrates in his trial said,

“I cannot keep quiet, for that is to disobey God. The greatest good for a man every day is to discuss virtue and other things of life. Life without inquiry has no meaning. The unexamined life is not worth living”

So, this is one aspect of Chanukah. The fight against Darkness

However, as Rabbi Wein continues, here in Israel Chanukah has largely returned to its original format and meaning.

The Hasmoneans fought against foreign oppression (interference) of Israel and paganism and for Jewish sovereign independence and Torah observance. And that battle has not ended

It is ironic that the ICC decision to challenge the Jews right to Israel was issued just before Chanukah. What further proof of our history and connection to our Land do we have if not for the Chanukah story. Fact Check – The story of Chanukah took place where ? It took place in Israel and is only the only Jewish Festival that we Jews celebrate that took place in Israel. This was made clear by prime minister Netanyahu as the candle lighting at the Kotel, in Jerusalem, the ancient capital of Israel.

In fact, the truth of Chanukah is expressed so clearly by a new Facebook friend from Pakistan.

“Hanukkah is a #Zionist holiday that celebrates the military #victory of the Maccabees who liberated #Jerusalem and restored it as the capital of #Israel, I would like to wish #Jewish people in #Pakistan and across the #world a very happy #Hanukkah , my new name is #David_Ariel , I am #muslim_Zionist , I want to friendship between Pakistan and Israel, Shabbat Shalom from Pakistan Islamabad , I believe on God, God protect me always”

About the Author
Jeffrey is a Blogger, Entrepreneur and Philanthropist (we can only dream) living in Jerusalem. He has five kids and three grandchildren. He is looking to spread the message of Ahavat Yisrael and Jewish Unity through the music and teachings of Rabbi Shlomo Carlebach and connecting our lost Jewish brothers and sisters to Israel. God and themselves.
Related Topics
Related Posts
Comments