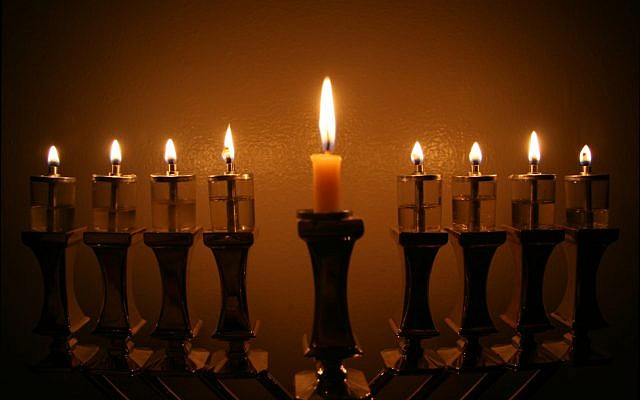 One should meditate on the idea that the initials of the words ‘…l‘hadleek ner Chanukah [to light the Chanukah candle]’ are the holy name called ‘Nachal’.”

It is easy to see that the first letters of  “l‘hadleek ner Chanukah” are three letters, Lamed (L), Nun (N), and Chet (Ch). Rearranged, these letters spell the word NaChaL – “river.” As I wrote in my essay “On the Nature of Time and the Age of the Universe” and more recently in the post “Joseph—the Master of Time,” a river has been the metaphor for time across many cultures. Does this Kabbalistic meditation hints at a connection between Chanukah lights and time? I think so. Indeed, Rabbi Chaim Vital continues:

The initial letters of the words notzer chesed l‘alefim spell nachal, “river.” This, of course, is a fragment from the Thirteen Attribute of Mercy (Ex. 34:6-7).  This phrase makes an explicit reference to time – “for two thousand [years].” This may be one reason, why it is customary to recite the Thirteen Attributes of Mercy as a part of the Tashlich prayer at a river or a stream in the afternoon of Rosh HaShanah.

If Chanukah lights are reminiscent of a river, which is a symbol of time, what can Chanukah teach us about time?

In physics, time is thought to be linked to entropy—the measure of disorder. Entropy is essentially the number of microstates in which the system can be found. The main property of entropy is that it always increases [in closed systems]. This is known as the Second Law of Thermodynamics.

According to Hillel, we light the menorah in the ascending order – one light on the first night, two lights on the second night, etc. According to Shammai, the menorah should be lit in the descending order – eight lights on the first night, seven lights on the second night, etc. On a simple level, both methods are counting time by linking it with the notion of order – Hillel counts the entropy (the measure of disorder), which increases with time, whereas, Shammai counts the order itself, which is the inverse of entropy, and which decreases with time.

On a deeper level, these two opinions of the sages of the Mishnah may be hinting at the unique properties of time.

Since the publication of the Special Theory of Relativity by Albert Einstein in 1905, space and time became inextricably intertwined. This led Einstein’s mathematics professor, Hermann Minkowski to combine space and time into a four-dimensional spacetime continuum – die Welt, as Minkowski called it in German. However, his innovation was a mixed blessing. While making Theory of Relativity mathematically more elegant, it obfuscated the unique properties of time that separate it from space.

Indeed, whereas space is static, time always flows. This ceaseless flow of time is called time-flux. So far, we have no explanation for the time-flux in physics.

There is another difference: whereas space is isotropic, i.e., physical properties are uniform in each direction, time is decisively anisotropic and only flows in one direction. This is called the arrow of time. It seems to me that the opinions of Hillel and Shammai as to the order of lighting Chanukah lights may be hinting at these two unique properties of time.

According to Hillel, on the first night, we kindle one light; on the second night, we kindle two lights, etc. This ascending order hints at the time-flux and the arrow of time, which only flows in one direction.

The arrow of time, which only flows in one direction, seems to be rooted in thermodynamics. All fundamental laws of physics (except for the Second Law of Thermodynamics) are symmetric in time. Theoretically, you can reverse the direction of time, and you wouldn’t notice a difference. For example, if we make a movie of a collision of two billiard balls, whether we run your projector forward or backward, the resulting movie would not appear to us unusual or violating any law of nature. However, if we film any thermodynamic process and run the movie backward, we will immediately protest – the scrambled eggs can never be unscrambled, and the spilled milk cannot be unspilled. This is because the entropy—the measure of chaos—must always increase; i.e., every system evolves from being more organized into a less organized state.

Let’s pause for a moment and consider the Universe as a whole. This moment in time, almost 14 billion years after the Big Bang, our Universe is still evolving from the past into the future. That means that whatever the level of the entropy (the measure of disorder) of the Universe is now, it had to be incredibly less 13.8 billion years ago at the time of the Big Bang, because, since then, the entropy has been increasing. All this means that the Universe came into existence in a highly organized state with minimal entropy. This doesn’t look like a result of an explosion called the Big Bang, which we’d expect to produce a pretty chaotic universe with high entropy. Only a created Universe can come into existence in a highly organized state pointing at the Creator.

According to Shammai, we start with the menorah in a highly ordered state – with all eight lights arranged on the menorah. From then on, we go from the most ordered state to a less ordered state with only seven lights, and then six lights, etc. On a simple level (peshat), the diminishing number of lights symbolize the fact that, as the some of the oil in the Temple menorah has burned out (increasing the entropy) and there was less oil left (less order). On a deeper level, was Shammai, perhaps, hinting at the most ordered state of the Universe at the dawn of the Creation pointing to the existence of the purposeful Creator who created the Universe with a purpose and order?