Charedi plane passengers who disrupt flights should face the full force of our community’s public opinion.

A number of times, we’ve seen the same story rear its ugly head: Bigoted men refusing to sit down on flights because they have been allocated a seat next to a woman.

This week, Orthodox men refused to sit during an easyJet flight.

A witness said they ‘blocked the aisles, used the steward call buttons constantly, causing disruption, and one “plugged a mobile device into a USB port on the crew control panel in the forward galley. This led to the exit light above the panel being illuminated”.

This stunt is embarrassing every time it’s pulled.

Most who read the story within the community understand it’s not representative. But when it appears in mainstream papers, one dreads to think what impression people get of Jews. 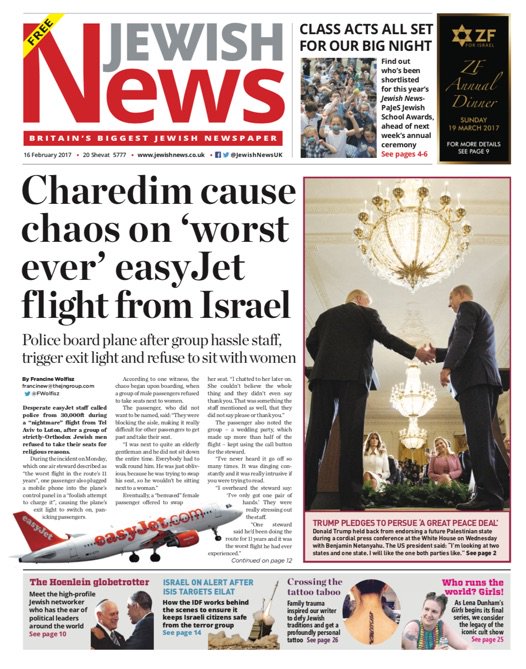 When Jewish News put it on our front page, we had Orthodox men asking: “Really? Front page news?”, with another calling it a “good opportunity to attack Charidem”.

The question then, if some Orthodox figures aren’t willing to tackle the issue, is how to take on the problem.

When I asked the Jewish Orthodox Feminist Alliance (JOFA), they said it is for the airlines to change: “Perhaps it is time for airlines to set clear restrictions and/or protocols for individuals who choose said stringency.”

They add, “To be clear, we find no reason in terms of Jewish law or Jewish values, for separate seating on planes, buses or any other setting.”

On the one hand, sanctioning gender-segregation if people are willing to pay, before saying they find no reason for separate seating.

Airlines should not be allowed to pay a premium price to discriminate.

If an organization that prides itself on Orthodox feminism can’t bring itself to condemn this misogyny and bigotry, then who can?

It’s not “time for airlines” to do anything about it. It’s not the airlines role to adapt to these views and behaviors.

It’s the role of Charedi men who express them to adapt or change.Whatever these men want to do in their own homes is their business – but they were on a plane, with other people. They paid for tickets, like other people. Unless they willing to pay extra to use a more accommodating airline, to ensure sensitivities are protected, then they should find an alternative, woman-free, route. Maybe on a canoe?

A lot of people in the community have expressed their disgust at what happened, including Orthodox voices. The problem is that airlines can’t ban people or employ extra charges for segregation. It’s not their job. Indeed, it’s probably illegal.

It’s up to the wider Jewish community to call out these people, as not in line with Jewish values, or having support.

Rest assured, that if we don’t vocally condemn these actions, silence will be seen as passive agreement, and our community’s name will be dirtied.