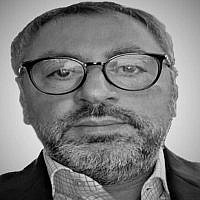 The Blogs
Anri Amir David
Apply for a Blog
Advertisement
Please note that the posts on The Blogs are contributed by third parties. The opinions, facts and any media content in them are presented solely by the authors, and neither The Times of Israel nor its partners assume any responsibility for them. Please contact us in case of abuse. In case of abuse,
Report this post.

As the worlds superpowers battle for the upper hand in the wake of the Covid-19 pandemic, geopolitical competition will continue to heat up in near future. Given the much higher costs of direct military conflict and the difficulty in identifying perpetrators of cyber-attacks, experts now believe that any military escalation could likely take the form of cyber-warfare. As a cyber security and FinTech expert, I define cyber-warfare as a government involved in the destruction of another in cyberspace.

This could be triggered by a complete diplomatic breakdown between major powers, leading to an escalating string of tit-for-tat cyber-attacks ultimately targeting software that controls state infrastructure. The complete shutdown of a national grid, for example, could severely disrupt business operations, creating uncertainty that would weigh on investor sentiment. Therefore, this blogpost will focus on the recent military enhancements made by the US and China in the field of Artificial intelligence (AI). AI is progressing at lightning speed and is changing the way we perceive modern and future warfare and military modernization.

The Chinese People’s Liberation Army (PLA) has routinely made clear its desire to harness AI for military advantage and is already procuring AI-related systems and equipment to prepare for “intelligent” warfare. However, AI so far represents a small fraction of overall purchasing activity (1.9% of contracts, now done through China’s military-civil fusion development strategy). Currently, the PLA seems most focused on procuring AI for intelligence analysis, predictive maintenance, information warfare, and navigation and target recognition in autonomous vehicles (there are still reservations on developing lethal autonomous weapons systems – LAWS). Chinese leaders view AI as the key to transforming the PLA into a “worldclass,” globally competitive military force. They firmly believe PLA advances in AI and autonomy will create new vulnerabilities for the United States and allied forces operating in the Indo-Pacific, specially for the undersea domain, information operations and adaptive radar systems, and for the autonomous applications of AI.

However, although PLA investment in the technology appears substantial—roughly equivalent to that of the U.S. military—it remains to be seen how exactly AI might alter the balance of military power in practical terms. In addition to renewed interest in counter-autonomy research, U.S. and allied efforts to regulate access to semiconductor devices may hinder the utility and availability of AI systems for the Chinese military.

United States: the FM 3-12 2021, the new approach to cyber warfare and investments in AI

According to the US military doctrine (FM 3-12, August 2021), cyber space operations play an essential role in the Army’s conduct of unified land operations. Cyber space is one of the five domains of warfare and uses a portion of the electromagnetic spectrum (EMS) for operations, for example, Bluetooth, Wi-Fi, and satellite transport. Cyberspace and the EMS are critical for success in today’s operational environment (OE) – they believe adversary forces will like rely heavily on cyberspace and EMS-dependent technologies for command and control, information collection, situational understanding, and targeting. Achieving relative superiority in cyberspace and the EMS therefore gives commanders an advantage over enemies.

American cyber space forces and electromagnetic warfare (EW) professionals are organized, trained, and equipped to provide the following core competencies: (i) to enable situational understanding, (ii) to protect friendly personnel and capabilities, and (iii) to deliver effects. They must also follow these fundamental principles as basic rules of conduct for cyberspace operations and EW: (i) operational focus, (ii) adaptability and versatility, and (iii) global reach.

Having such a sophisticated doctrine supporting the Armed Forces purchasing and warcraft developing programs, it is no surprise that the Department of Defense has an ambitious plan for developing artificial intelligence. While most federal agencies have seen their research and development funding decline in 2020, DOD’s R&D budget has increased. For the Fiscal Year of 2022 the DOD leaders plan to invest $874 million in artificial intelligence (AI)-related technologies to boost deterrence against potential adversaries like China, as well as to enhance efficiencies in computing, command and control, and logistics. The amount of money being investment showcases how serious the US is taking the cyber warfare threat.

What lessons can we draw for the rest of the world?

The world is only starting to understand the magnitude of the threat and the potential damage that cyber threats can cause to our countries. However, most states have not yet responded to it appropriately – I believe that many of them do not understand exactly what actions should be taken. Quite frankly, until these countries fall victim to a large-scale cyberattack, it is unlikely that legislators will prioritize making cyber infrastructure resilient in the military and private sector a priority. We should take the efforts made by the US and China as an example and draw lessons to our own domestic agendas.

Israel is often considered one of the world’s cyber superpowers. However it cannot get complacent. Israel must remain vigilant, always investing and modernizing its arsenal. New or emerging cyber powers may play an important role in this area, including Iran. The Islamic country has already demonstrated some of its capabilities in in recent years and might become a major player in the future. The barrier to entry into cyber war is low, and as technology spreads and the world as a whole becomes more tech-savvy. Not to mention the threat posed by non-state actors themselves. Israel must boost investments in this field and take cyber warfare as a high-risk threat.

About the Author
Anri Amir David is a well-known international expert in FinTech, Cyber Security, A.I. and innovation. Anri is the founder & CEO of Black Wall Global, and Cyber.so. Anri was a strategic partner at Mellanox Technologies & worked closely on cyber products of Rafael Advanced Defense Systems while also being a board member of The International Police & Security Consultants (IPSC). In addition, Anri Amir David is a fellow of the Russian Academy of Technological Sciences.
Related Topics
Related Posts
Comments