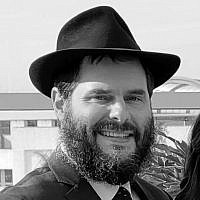 The Blogs
Eliezer Zalmanov
Apply for a Blog
Advertisement
Please note that the posts on The Blogs are contributed by third parties. The opinions, facts and any media content in them are presented solely by the authors, and neither The Times of Israel nor its partners assume any responsibility for them. Please contact us in case of abuse. In case of abuse,
Report this post.

Yesterday, I went to prison. In fact, I go to prison once a month to meet the Jewish inmates, offer them a word of encouragement, teach some Torah, and to keep the Jewish spark alive in the unlikeliest of places.

But yesterday was different than usual. Being the first day of Chol Hamoed Sukkot, I brought along on my monthly visit a lulav and etrog, as well as a pop-up sukkah. I had received special permission from the prison administration, arranged months in advance, to bring these items into the facility.

The prison had also ordered a special holiday “feast” for the Jewish inmates. While their usual kosher diet consists of soy-based products, for this occasion, they received a prepackaged kosher airline-style meal, complete with meat, potatoes, and vegetables.

I set the small sukkah up outside the religious center, and each man had a chance to go in and recite the blessing on the lulav and etrog. Afterwards, one at a time they sat in the sukkah with some of their food and recited the special blessing for that as well.

Then we went back into the chapel to finish the “feast.” While they ate, I shared with them stories and Torah thoughts, and even sang a few niggunim.

I spoke about the equality among Jews as it is found in the lulav set, with each of the four species representing a different type of Jew. During Sukkot we bring all Jews together regardless of his or her observance or spiritual level. I also noted that this year is a year of Hakhel, when all Jews — again, regardless of their Torah knowledge — would gather in the Temple on Sukkot to listen to the king read from the Torah.

Overall, my message was that although we all certainly have our differences, every once in a while we must pause and think about what unites us rather than what divides us.

Then, I jokingly said, “Let’s go back out to the sukkah for dessert.” I was referring to the bananas they each received with their holiday meal.

So imagine my surprise when, once we were back outside, one of the guys removed a box of chocolate bars from his bag (they all carry mesh bags with their personal belongings), and started handing out bars to the other men for them to eat in the sukkah.

At that moment I understood what real Jewish unity meant. Prison is an environment where everyone fends for himself; they’re always looking for an advantage of some sort, using all their resources to get a leg up (I even noticed one inmate trading his banana for another’s sandwich).

Yet, knowing that he would be celebrating Sukkot with his fellow inmates, this man brought along a snack — which no doubt cost him significantly — to share with his fellow Jews in honor of Sukkot, the holiday of Jewish unity. 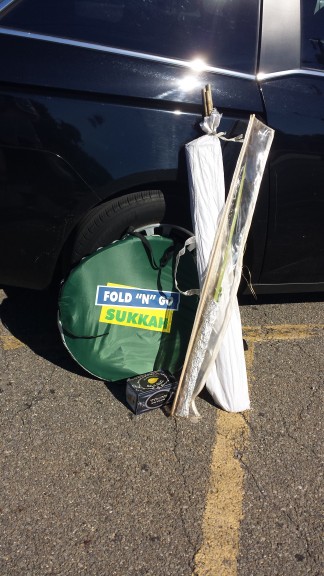 Although photography is not allowed in Indiana State Prison, I got a shot of my Sukkot gear in the parking lot.
About the Author
Rabbi Eliezer Zalmanov is co-director, along with his wife Chanie, of Chabad of Northwest Indiana. He is also a member of Chabad.org's Ask the Rabbi and social media teams.
Related Topics
Related Posts
Eliezer Zalmanov
Comments