She gave him a Brazilian flag and asked forgiveness to the consul on behalf of the Brazilian Christians for his rejection as ambassador to Brazil during ex-president Dilma Rousseff’s government.

The symbolic action was similar to what Jane did last month in Israel, when she led a group of political leaders in an official meeting with israeli authorities. 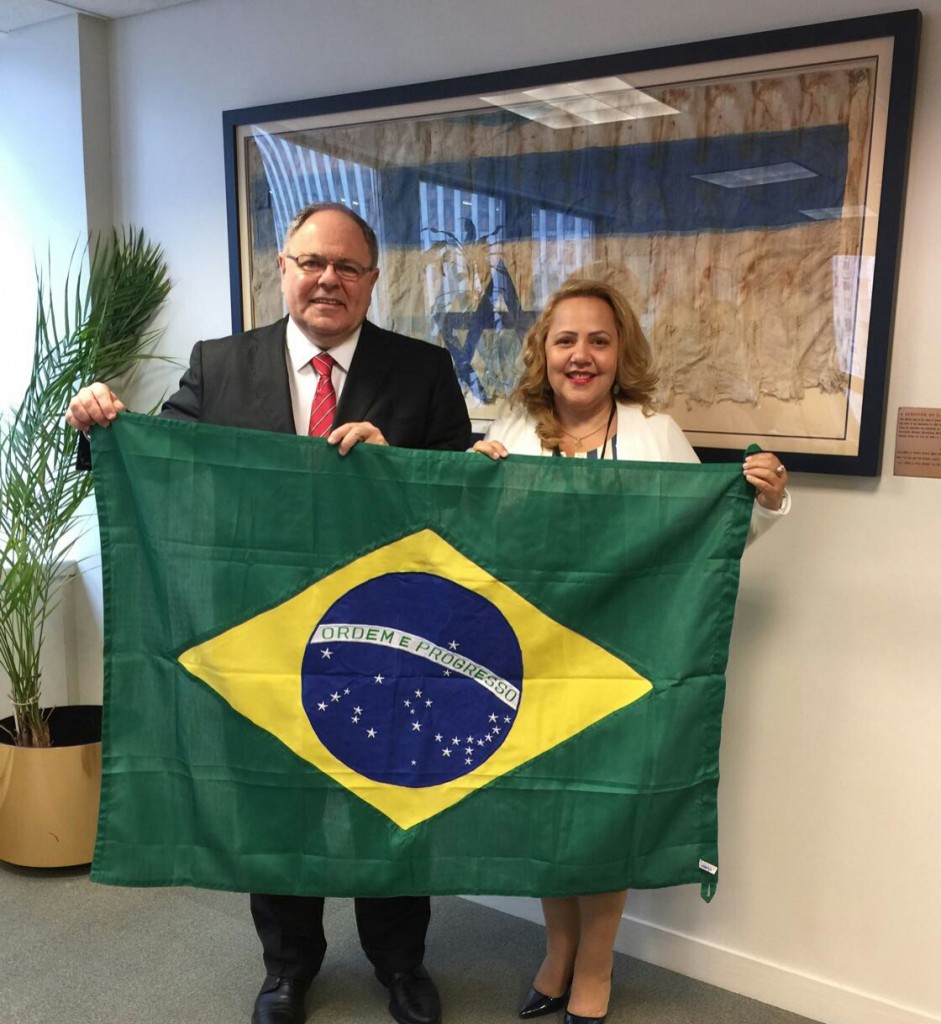 In 2015, ICBI fought for the acceptance of Dayan, but his credentials were rejected by Dilma Rousseff following the political pressure of leftist groups. The ex-president was ousted from office last year, following a great corruption scandal.

After the diplomatic rift, that lasted a couple of months, Dayan was sent to New York to act as General Consul and Brazil remained without Israel’s ambassador for almost a year.

The reason for the meeting between Silva and the General Consul was to seek support from the Israeli government for different projects ICBI intends to promote to celebrate the 70th anniversary of Israel in 2018. The main event is a summit that will gather Christian leaders from different countries.

Jane Silva has a long history of pro-Israel actions in different parts of the world, always seeking to strengthen the ties between Christians and Jews. She echoed the words of Prime Minister Netanyahu, that recently admitted that “Evangelical Christians are Israel’s best friends.”

According to the Reverend, Brazilians have great respect for Dayan and his story and would like to see him in Brazil soon. The Christian leader emphasized that “Brazil has a fundamental role in the history of Israel, since it was through the leadership of Osvaldo Aranha that the UN recognized the right of Israel to be restablished, in 1947”.

The CIBI leader explained to the Consul General that, in 2018, International Community Brazil-Israel will promote events in São Paulo, Rio de Janeiro and Belo Horizonte, the biggest cities in the country. Dayan was invited the main speaker and address various topics, including geopolitical, historical and religious issues involving Israel. Other Israeli and Brazilian leaders will attend the Summit, that will allude to the historical interweaving between the two countries.

Additionaly, ICBI plans to promote a friendly match with guest athletes, calls “A kick for peace”.

Jane Silva left the meeting satisfied with the outcome, saying that she sees Dayan as a dynamic and highly competent leader. She believes that Brazil had a lot to lose not having him as an ambassador. She added that he would be very well received.

A self-proclaimed christian zionist, Silva concluded by saying that the International Community Brazil-Israel now has an office in the United States, which will facilitate the cooperation with Dayan and the israeli government.

About the Author
Jarbas Aragao is a Brazilian and US educated writer. He has worked as a translator and journalist. Also graduated in Theology, he runs Gospel Prime one of the biggest Christian News websites in Brazil. He is also a regular contributor to CBN/Mundo Cristiano.
Comments
Advertisement