The Blogs
Angela Winter
Apply for a Blog
Advertisement
Please note that the posts on The Blogs are contributed by third parties. The opinions, facts and any media content in them are presented solely by the authors, and neither The Times of Israel nor its partners assume any responsibility for them. Please contact us in case of abuse. In case of abuse,
Report this post. 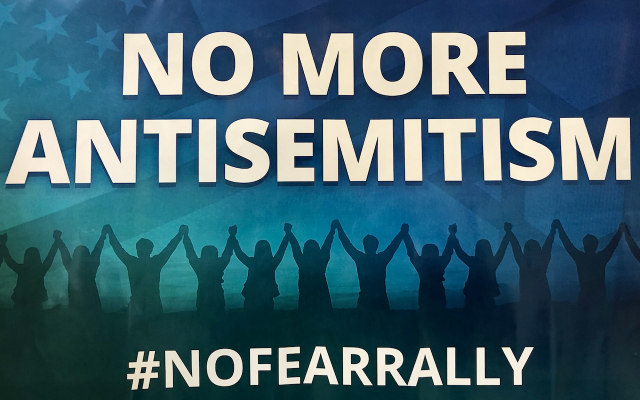 As the stabbing victim began to tell his story, I had an epiphany: I care a lot about antisemitism; I’ve been a Judeophile since childhood (It was reading those All of a Kind Family books, over and over). But I’m a Christian: I have no real idea what it feels like to be Jewish, much less have a stranger hate me because of my religious faith—much less hate me enough to try to kill me. The Orthodox Hasidic rabbi from Boston, recently the victim of an antisemitic knife attack, was speaking at a “No Fear” rally in support of Jewish people in Washington, DC.  Shlomo Noginski said he’d been born in St. Petersburg, where he had experienced “terrible antisemitism” even as a young child. “Never in my darkest dreams did I imagine that I would feel the same way here in the United States, the land of freedom and endless possibilities,” said the rabbi, via a translator (he was, he said, too weak to speak much in English). And listening to his voice break with emotion, I suddenly realized: I am all words.

I have spent years studying the Holocaust and teaching classes in churches about the history of Christian antisemitism. I could articulate the academic views over whether Christian anti-Judaism caused, or led directly to, or “merely” contributed to, the Holocaust. I could tell you with great nuance the differences in anti-Jewish hate currently coming from the far-right, the far left and extremist Islamists, as well as the ancient, deadly anti-Jewish tropes these hatreds have in common. But this is all just information on paper. As the rabbi spoke, I realized that the gap between denouncing antisemitism and experiencing it is vast. Nobody was attacking me. If I were sitting outdoors at the sushi restaurant in Los Angeles when several cars waving Palestinian flags stopped and men got out and attacked diners, asking “Who is Jewish?”–they wouldn’t have been after me. I’m a gentile Anglican of English and Scottish ancestry. If I had been walking through Times Square in New York when a 29-year-old Jewish man wearing a yarmulke was beaten and pepper-sprayed by men yelling shouting antisemitic slurs, they wouldn’t have been targeting me. I wouldn’t be likely to gain the attention of the men who threw garbage at a Jewish family in Florida, yelling “We’re going to rape your daughter.” It’s easy for me to shake my head over antisemitism, and go home in safety.

But our world is not truly safe if a group of people are despised and attacked solely because of their religion. An American Jewish author who had moved to Paris wrote recently that nothing had scared her before this, not even the siege at a kosher supermarket in Paris in 2015. But now, the social tolerance of Jew-hatred being displayed by educated people has left her feeling deeply afraid, wrote Toni L. Kamins in a blog post. The pro-Palestinian demonstrations in Paris and elsewhere that followed the violence in Israel and Gaza this past spring aren’t new, she observed. What has changed is that French people (and others around the world) feel comfortable expressing anti-Jewish sentiments in public, including the desire to see Jews killed, Kamins said. Looking at the apathy of many Americans to the increase in antisemitic violence, I think she is right to raise an alarm.

The explosion of antisemitism world-wide should concern all decent people, and it should especially concern those of us who are Christians, who share with Judaism the God of the Hebrew Bible. A church friend and I were among a handful of Christians who came to the rally, including an African-American pastor who spoke. I was thankful for the opportunity to publicly say that I believe antisemitism must be opposed by Americans from across the political and religious spectrum. As we stood melting in the East Coast heat, a man holding a big umbrella over his associates offered me shelter. There were Jewish people from vastly differing walks of life–religious Jewish women in long skirts, and those with gay pride flags, and a smiling Holocaust survivor with a walker. One jauntily dressed man wore a T shirt which said Jews do it better! Two angelic tousle-headed toddlers falling asleep in a double-sided stroller wore signs that poignantly proclaimed: I should feel safe at synagogue. I should feel safe at school.

The rabbi from Boston had been stabbed multiple times only eight days before the rally; his arm was in a sling under his suit coat. I thought about how brave this deeply religious man was even to show up. Jews will defend themselves, Rabbi Noginski said, “but our true answer is that we will love one another through expressions and acts of consideration and kindness.” At this comment, the man next to me shook his head. “Yeah, we saw how well that worked last time,” he said, referring to the Holocaust. The rabbi holds a black belt in judo and had fought off his attacker, so I thought that he and my neighbor at the rally actually were in some agreement.

A high school student read a few of the hundreds of death threats she had received on social media after organizing a pro-Israel rally outside Chicago; these hate-filled rants praised Hitler and called in graphic terms for her death. The teenager, Talia Raab, has written about the pro-Palestinian counterprotestors who violently accosted her family, trying to break the windows of their car. A recent editorial in the Chicago Tribune observed that such public assaults are reminiscent of the sort of antisemitic aggression common in Europe, motivated by anti-Zionism. The situation in the Palestinian territories is complex and troubling, but I believe that Jewish people–like any other people–have the right to self-determination in their ancestral homeland. This idea is anathema in many circles; if you dare to say that you in any way support Jews having a Jewish nation, even if you also recognize the plight of and rights of Palestinians and would welcome a two-state solution, you become an immediate pariah, or worse. The American Jewish community itself holds strongly differing views about Israel. But whatever our politics, Americans cannot condone violence and the threat of violence against Jews by chalking it up to anti-Zionism; we cannot excuse attacks against Jews or calls for their murder on the grounds that someone detests Israeli policies. Nor can we ignore the fact that anti-Zionism has morphed in many contexts into old-fashioned hatred of all Jews, Zionist or not. Nobody stopped to ask Rabbi Noginski how he feels about Gaza. The attacker saw a Jew; he tried to kill him.

In 2019, after the Pittsburgh synagogue shooting, Baptist Robert Nicholson insisted in an article in the New York Post that American Christians should organize in defense of their Jewish neighbors. (Nicholson is president of the Philos Project, an organization that promotes Christian engagement with the Middle East). A recent statement by US bishops similarly said that Catholics are obligated to defend Jewish people against any antisemitism. As a Christian, I experience a holy connection between my spiritual world and Judaism. But even as I wish to express solidarity with Jews, I know that teaching by Christians has prompted centuries of antisemitic violence. Current antisemitism comes from multiple sources, but anti-Jewish Christian theology has had a long and deadly shelf life. Being willing to consider this painful truth and look hard at our own theology is part of showing honest support. But surely conversations at interfaith seminars are not enough. Unless those of us who are Christians are willing to publicly identify with our Jewish neighbors and friends in concrete ways, any talk of solidarity we may offer won’t be worth much. I am not sure what this should look like, but I feel certain that we must be willing to risk something. Maybe every Christian should wear a Star of David in public, for a start.

I know in agonizing detail the record of Christians during the Holocaust, which was generally horrific with rare meaningful exceptions. One of those oft-cited exceptions is the French town of Le Chambon, where a Protestant Reformed pastor every week during the Nazi period concluded his sermon with the words: “You shall love the Lord your God with all your heart, with all your mind and with all your strength and love your neighbor as yourself. Go practice it.” This minister, quoting the words of Jesus (who was citing the Torah) led Le Chambon in joining together to hide and rescue Jews. The entire village participated in these rescue efforts; not a single person informed to the Nazis. Refuge was provided for more than 5,000 people fleeing Nazi persecution, about 3,500 of whom were Jews; many were children. When Nazi officials demanded that the pastor, Andre Trocme, turn over any Jews in the village, he famously replied: I do not know what a Jew is. I know only human beings.

In a book called Why? Explaining the Holocaust, Peter Hayes analyzes the complicated multiple factors that affected ways in which the Holocaust differed from country to country. Some European countries were only too happy to get rid of their Jews so they could inexpensively buy Jews’ possessions from the Nazis or take over Jewish homes or businesses. In Poland, after the war Jews who tried to return to their homes in some towns were met with violent pogroms. In Denmark, however, the non-Jewish Danes had unified to ferry almost all of the nearly 8,000 Jewish residents to safety in Sweden. Hayes notes that perhaps even more remarkably, after the war when these people returned to Denmark, they found that many Danes had carefully tended their homes and property for them. Thankfully we do not live in a fascist totalitarian state, and we are not engaged in a world war. We do live in a country in which Jews are coming under attack in public spaces, in broad daylight. Referencing the Holocaust, Hayes writes: “Resistance is never easy and seldom comfortable, and compassion has to be practiced in order to hold up when challenged. Rising to that challenge begins with a refusal to be cowed, followed by alertness to opportunity.”

Jewish groups are organizing themselves to oppose antisemitism on multiple fronts. I hope that all Christians would join these efforts and seek to emulate the village of Le Chambon and the Danish rescuers. I hope we who say we follow a Jewish Messiah might refuse to be cowed by social pressure or actual fear and look for opportunities to translate words of support into protecting Jewish synagogues, Jewish homes, Jewish people. More than polite expressions of sympathy are required. If my two daughters were being attacked, I would certainly do more than shake my head over it. Jewish people are our friends and co-workers, or they are strangers. Either way, Jesus said his followers are to consider our fellow humans as our neighbors, and he told us to love our neighbors as much as we love our own skins, our own spouses, our own innocent children asleep on a summer’s afternoon. If you love people, you take risks for them. You don’t just talk.