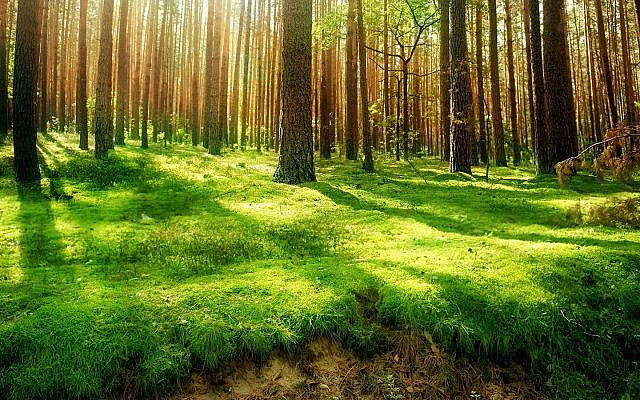 The climate crisis, the health of the planet, and the world that we will leave for our children and grandchildren should be matters of grave concern to all of us. From a Jewish perspective, our responsibility towards the planet is clear. The first human being was given mastery over the Earth and all its inhabitants: “Have dominion over the fish of the sea, and over the fowl of the air, and over every living thing that moves upon the earth” (Gen. 1:28). Yet, at the same time, this dominion was never absolute. Once the human is placed in the garden, he is tasked with “working the land and protecting it” (Gen 2:15).

This balance between rights and responsibility is at the core of the mitzvah of the Sabbatical Year: “Six years you shall seed your land… and the seventh year shall be a Sabbath, a rest of the land, a Sabbath of the Lord” (Lev. 25:3-4). Our relinquishing of control ever seven years demonstrates and inculcates in us the principle that, ultimately, the land is God’s and that our rights to it are not absolute: “For the land is Mine, for you are strangers and sojourners with Me” (v. 23).

This principle is given powerful expression in the Midrash (Kohelet Rabbah 7:13):

“See the works of God: for who can make that straight that which he has made crooked?” (Eccl. 7:13). When the God created the first human, God took him and surveyed with him all the trees of the Garden of Eden. God said to him: “See my works, how beautiful and praiseworthy they are! All that I have created – for you have I created them. Direct your attention and efforts that you should not ruin and destroy My world, for if you ruin it, there is no one who can fix it after you.”

This midrash sharply addresses the grim reality that we are facing today with the climate crisis: the possibility that the planet, with all its goodness, its ability to sustain life, the bio-diversity and beauty that we so cherish, can be destroyed due to human action and inattention. And it spells out our weighty moral and religious obligation to do everything in our power to prevent that from happening. For if it does, there will be no going back. We will have permanently destroyed God’s creation and God’s gift to us.

Our religious mandate to protect the planet is undeniable. But does this mandate translate into halakha?

The halakhically observant community, by and large, understands that our primary – for some, sadly, even exclusive – source of our religious obligation is defined in terms of halakhic requirements and restrictions and not broad mandates and values, even those based in the Written Torah. Finding a halakhic expression of these religious mandates, then, is a critical task if we hope to give them concreteness, specificity and binding power.

One approach is to focus on the way that our actions can bring about the injury of others’ health and well-being and even, eventually, the loss of life. From this perspective, we would turn to the halakha that forbids injury to another human being. The challenge here is that this halakha and related ones focus on direct actions that inflict injury to others. When we are dealing with indirect causation—what is known as grama—then the degree of responsibility is greatly attenuated. The path that extends from my driving a car that emits high levels of CO2 to the health problems of a particular person, or to the flooding that occurs halfway around the globe, is enormously indirect. The halakhot related to personal injury, thus, cannot begin to be meaningfully applied to this issue.

The best place to look, then, is not the halakhot that deal with injury to person, but those which deal with injury to the planet. This is consistent with our intuition of where the primary problem lies and what was expressed so powerfully in the midrash. We are destroying this planet that we inherited and are bequeathing it, ruined, to our children and future generations.

Two areas of halakha speak to this issue. The first is the prohibition bal tashhit, to not purposely destroy any part of the world that God has given us. This applies to all forms of property, even our own and even if it is ownerless (Shulkhan Arukh HaRav, Shmirat Nefesh, 15; Har Tzvi OH 102).

It also applies particularly to natural resources that give and sustain life.

The Torah describes a scenario in which an army is besieging a city, and states that it may not cut down the fruit trees outside of the city. The simple sense of the verse is that this is prohibited even if it is needed to serve the goals of the siege, because: “A person is,” i.e., is given life by, “the trees of the field” (Deut. 20:19; Ibn Ezra and Ramban, ad. loc.). Also critical to note for our issue, is that the Rabbis extend this prohibition to include indirect causation of the trees’ destruction and to cases where one is not actively intending to destroy it (Rambam, Kings 6:8).

The value underlying bal tashit, thus, speaks directly to the impact that our actions have on the life-sustaining resources of our planet, of which the climate itself is first and foremost. Yet the halakhic formulation of this prohibition takes on a more limited scope, and permits destroying objects when the destruction is not wanton and serves some human purpose, even one of mere financial benefit (Baba Kamma, 91b). The reason for this is that when an act serves a benefit it is not considered destructive (Rambam, ibid.). Additionally, it may reflect halakha’s desire to not overly restrict human behavior in a way that would be unduly burdensome.

This does mean that a person has a blanket license to act in ways that destroy the planet’s resources merely to, say, save her from the effort and expenses it would take to reduce her carbon footprint. Halakha is clear that we must prioritize using a non-fruit bearing tree to one that is fruit-bearing. When we act to serve our needs and desires, we must do so in a way that minimizes the impact on the life-sustaining resources of the planet (Baba Kama, ibid.).

Moreover, many poskim are of the opinion that when it comes to cutting down fruit trees, the need must be very compelling, as they are both mentioned explicitly in the verse and, significantly, are a source of life (see, for example, Havot Yair, 195).

In addition to strictly halakhic arguments, poskim cite a story in the Talmud (Baba Kamma, ibid.) which relates how a certain rabbi’s son died as punishment for his cutting down a fruit tree, even though it was technically permissible. This makes it clear that even when there are technical allowances, the values underlying this prohibition remain very much in place (Sheilat Yavetz,1:76). Cutting fruit trees endangers our lives and the lives of our children, plain and simple. Such a warning could not be more pointed and urgent than it is today.

The task for halakhists now is to not only embrace and promote this halakhic position, but also to expand it. For if there are few circumstances that would permit the destruction, even indirectly, of individual fruit trees, then how much more so should this prohibition apply to actions and inactions that could destroy the entire planet, bring great harm to billions of people, and rob of us of life-sustaining resources that—unlike a few fruit trees—we cannot possibly live without!

The second halakha that would prohibit doing damage to our planet is the prohibition against damaging property owned by another person. This prohibition focuses not on wasting the gifts that God has given us, but rather on taking something away from someone. In its essence, it is a form of stealing.

The classic cases of damaging property are those of damaging private property, but it is equally prohibited to destroy property owned by the community, such as a synagogue or a communal cistern. The concept of communal property does not apply only to those things built by the community and made possible through its funds. It extends to natural resources that are not privately owned and that are used by all members of the community. While an abandoned lot is seen as ownerless, a natural spring that provides water for the town is considered the property of that town (Baba Kama 81a and Tosafot, s.v. u’Ma’ayan; and see, also, Nedarim 81a). If I were to pour toxic waste in that spring, I would be destroying the town’s property and would have to compensate its inhabitants for the loss of this essential and invaluable resource.

When we put out greenhouse gasses into the atmosphere, we are pouring toxic waste into an essential, life-giving resource, one that is accessible to, used by, and thus owned by, all of us. We cause this damage directly and indirectly through our actions and through inaction. The damage is sometimes visible and sometimes not. All of these are relevant halakhic factors in regards to civil liability and compensation. The bigger issue, however, is not civil liability. It is the actual moral offense and legal violation of destroying property, of irreversibly damaging the atmosphere, the permafrost, and the natural resources of the planet that we all own and that we all so desperately need.

While more work has to go into working out the specifics of the halakhot of bal tashhit and of destroying communal property, I am convinced that it is these halakhot which embody the moral and religious mandates to protect the planet that God has given us and to not destroy a resource that is essential to us all. And it is these halakhot which can and must make real demands on us and on how we must act going forward.