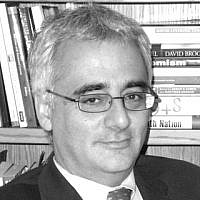 The Blogs
Charles Asher Small
Apply for a Blog
Please note that the posts on The Blogs are contributed by third parties. The opinions, facts and any media content in them are presented solely by the authors, and neither The Times of Israel nor its partners assume any responsibility for them. Please contact us in case of abuse. In case of abuse,
Report this post.

Article 3 of the Convention stipulates not simply the obligation of the international community to punish genocidal criminals, it outlaws the very incitement to genocide – the inevitable precursor to the barbaric act — which sparks the horrific conflagration that has claimed millions of innocent lives in the last century alone.

Yet, despite the Convention, the international community still has not succeeded in preventing genocide.

In the Parliament of Rwanda recently, I was among scholars and political leaders invited to speak and commemorate the 20th anniversary of the genocide that claimed approximately one million lives – of Rwanda’s Tutsi people.

Those present heard testimonies of horror and murder. We heard how a young Tutsi man purchased bullets for his family at inflated prices from Hutu killers so as to be murdered by revolver, rather than butchered by machete. A Tutsi woman recounted her recurring physical sensation of blood pouring on her back from her sister who lay over her to take the blows of the machetes in order to protect her life. As she was being killed, she exhorted her sister to live to tell the world what happened to the Tutsis of Rwanda. Twenty years later, the Tutsis are a nation still traumatized from such grievous inhumanity.

These testimonies illustrate the catastrophe of genocide. In my address at the Rwandan Parliament, I spoke rather of how the tragedies begin. They begin with ideas and with words; words that dehumanise; ideas that incite. They begin when world powers and leaders pursue short term interests at the cost of human rights and decency.

In Nazi Germany, the decimation of two thirds of Europe’s Jews was the culmination of a process of state-sanctioned incitement which began with the dehumanization of the Jewish People. The hatred so deep and complete, the slaughter of Jews came to be interpreted by Germans not as an atrocity, but as a public service.

Yet, despite all of the collective hand wringing since the Holocaust, the lesson of incitement was not heeded by the international community in time to prevent the genocide of the Tutsis — labeled “cockroaches” for example, as their Hutu persecutors called them. Once again, the intervention of the human rights and international communities, the UN blue berets, medical emergency teams, and policy makers, came only once the massacres was under way. For a million people, it was too late.

In 2009, at the United Nations Durban II Conference, after speaking on a panel regarding international law and incitement, on yom ha’shoah, a group of Rwandan diplomats and scholars approached me to express concern about the demonization of Jews and Israel by radical Islamists and specially the Iranian Revolutionary Regime. The Rwandans were concerned they were using the same tactics against Jews today, as Hutus extremists used against the Tutsis, and the Nazis against the Jews leading up to the Holocaust. They implored me to warn as many as possible and to help ensure that the United States and other democratic governments take the threat of incitement seriously.

Indeed, today, the tactics of incitement and dehumanization are once again on the world stage without meaningful protest by the international community. Overt calls by the Iranian Regime, and other radical Islamists to annihilate the Jewish state; references to Israel as a cancer and the Jewish people as “dogs”, “bacteria”, “pigs”, “apes” have been met with collective indifference. Where is the leadership against this outrage? Once again, the world, and much of our human rights gatekeepers in academia, are silent. How many times do we hear that unreflective dismissive cliche espoused by pseudo intellectuals that criticism of Israel can not be antisemitism? Yet few take the time to understand the antisemtism central to the ideology of the Iranian Revolutionary Regime and other radical Islamists, which consists of the amalgamation of a reactionary theology fused with the most pernicious forms of European antisemitism — including the incorporation of the themes of the Protocols of the Elders of Zion.

Today, the Iranian Regime calls to wipe Israel off the map as it strives to build a nuclear bomb. Rather than prosecute this incitement, a responsibility shouldered by all contracting parties to the Genocide Convention, Iran is being welcomed back into the family of nations, the beneficiaries of a re-energized diplomacy, a broken sanctions regime, all with nary a word about its record of incitement to genocide or its abysmal human rights record.

The lesson of indifference in the face of the Holocaust and the Rwandan genocide must be learned quickly, for in the words of Elie Wiesel, we are not simply living in times of great urgency, but of “great emergency.” Seventy years after the Holocaust, radical Islamists with their overt incitement have in effect become the the shock troops for western postmodern hypocrites who falsely parade themselves as progressive liberals with no conscious recollection of their antisemitic and racist historical pedigree — while the Jewish people and Israel are once again threatened to be consumed. As in World War II, antisemitism begins with Jews — but once this strain of hatred is unleashed upon society — it does not end with Jews. Radical Islamism threatens basic notions of humanity, equality and citizenship, the rights of women and religious minorities and moderate Muslims, while the historical record bears solemn witness to the human toll of suffering engendered from indifference to fascistic reactionary movements.

When the Iranian theocratic regime espouses its ideology of Jewish hatred incitement, the United States and other European democratic leadership must be cognizant of the long term implications and catastrophic consequences of allowing genocidal incitement to go unchecked. This is of particular urgency to remember during the current negotiations with Iran and the P5 plus one.

Of course this time the Jewish People are well protected. However, enabling a totalitarian regime to act out its ideological fantasies will usher in an era of extreme violence — with unpredictable consequences internationally.

About the Author
Dr. Charles Asher Small, is the Director of the Institute for the Study of Global Antisemitism and Policy (ISGAP), and the Koret Scholar, Stanford University. He is the author of a new five volume book entitled “Global Antisemitism: A Crisis of Modernity. (ISGAP Publications and Brill Press).
Comments