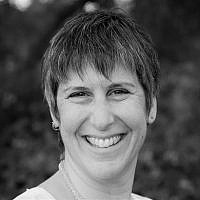 There we were. In my home, the sofas pushed back to make room for clothing racks filled with colorful tops and bottoms, the work of talented Tel Aviv-based-designer and good friend, Kiki Amqvist.

And then, the siren blew.

Grabbing our glasses of wine along with our cellphones, we ran into the safe room, our hearts in our stomachs. I popped upstairs and together with our son’s caregiver, Indu, we guided our youngest, Akiva, who has special needs, downstairs, while he rubbed the sleep from his eyes in confusion.

We checked our cellphones, scrolled through status updates. Listened for the first boom and then the second, talking and joking – anything to relieve the moment, the anxiety, the sense of disbelief that it was happening, in Jerusalem, again.

As we emerged from the safe room, we looked at each other…and continued shopping.

One friend left early – her husband called to say he’d been called up by the IDF, he’s in an intelligence unit. Distraught at the news and at the strain of single parenthood especially if her children’s programs are cancelled due to safety precautions, she left, but not before noting which dress she liked the most. Just for reference.

Akiva went back up to bed, seemingly unscarred by the sleep interruption. I reminded him of our siren procedure and gave him a hug and a kiss, hoping the rest of the night would be quiet.

I likened the whole experience to Nero fiddling while Rome burned. Sort of. Nero had it all wrong. He fiddled. We spent money and drank merlot.

Going to bed some hours later, I thought about the rest of the week. What schedule changes we’d have to navigate – my son’s afterschool program was cancelled along with his long awaited ‘tiyul shnati’ or year-end trip, given the ‘situation.’

What about rehearsals? When I’m not working the inclusion mission at Shutaf Inclusion Programs in Jerusalem, I’m artistic director of Theater in the Rough, a community-based, Jerusalem theater ensemble currently in rehearsals for our summer project, A Midsummer Night’s Dream: in motion, August 7th-21st. Hope you’ll join us.

We rehearse outside, in a public park. Cancel? Absolutely not. In a summer of fear and hatred, theater is deeply important. As an expression of hope, in a play about love and personal discovery, set within the magical-forest-world of Shakespeare’s imagination.

After some analysis, we moved rehearsal to our house. We moved the sofas aside again and figured we’d cram into the safe room as needed. I moved the laundry baskets and cleaning supplies to new locations in the house in case we needed every corner of the room. 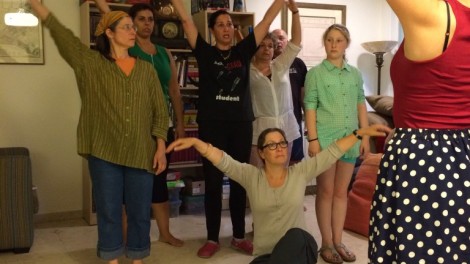 We need the rehearsal. Now. For so many reasons.

And then I remembered.

We were at rehearsal when we heard that the bodies of the three boys, Naftali Frankel, Eyal Yifrach and Gil-ad Shaar, had been found. We stopped. We talked. We mourned and talked, together.

We were also at rehearsal when we heard about the arrests related to the brutal murder of Mohammed Abu Khdeir. We stopped. We talked. We mourned and talked, together.

Now the situation had shifted again.

Life continued. It always does. Rehearsal continued. As an ensemble we supported each other as we continued to explore the play and parse the meanings of each line, relishing Shakespeare’s sexy and occasionally scatalogical humor along with the moments of pathos and understanding.

I’m just reflecting on my simple life here in Jerusalem.

Thankfully, the sirens were silent that rehearsal night.

About the Author
Beth Steinberg is the Executive Director and co-founder of Shutaf, Inclusion Programs for Children with Special Needs in Jerusalem. A believer in Jewish camping, Beth is a graduate of Massad and Ramah camps, where she learned the importance of informal education programs as a platform for teaching Jewish and social values. As a parent of a child with special needs, she struggled to find workable, appropriate activities for her child. Beth believes that a well-run inclusion program can help educate and change values, creating meaningful and lasting social change. Beth is also the Artistic Director of Theater in the Rough, engaging audiences with free summer Shakespeare.
Comments