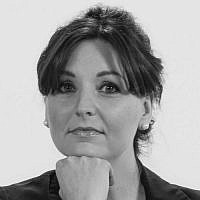 The Blogs
Dina-Perla Portnaar
Artist: writing & speaking | global PR, marketing & communications | no bla bla, quality & integrity | Presentation | BD
Apply for a Blog
Please note that the posts on The Blogs are contributed by third parties. The opinions, facts and any media content in them are presented solely by the authors, and neither The Times of Israel nor its partners assume any responsibility for them. Please contact us in case of abuse. In case of abuse,
Report this post.

Part of risk and integrity is the theme of child abuse, which is one of the least attractive subjects in the public debate. A lot of the times, if a survivor speaks out on child abuse in public, he or she is met with an enormous amount of stigma, pity and doubt on whether everything is going well with him or her. Such a survivor must be damaged for life, isn’t it? I have to admit that it depends on the part of the world. The United States values survivors who speak out on their stories or writers of autobiographies much more than for example the Netherlands.

Also, people don’t let the theme of child abuse really get through to them. Oftentimes, child abuse is even left out of the media, because it is perceived as a micro, private and complicated matter.

Survivors of abuse are not forlorn

I am here to tell you that I think such stigmatization is absolutely wrong and outdated, especially in times of COVID-19 and lockdowns, which constitute the ideal conditions for the danger, trapping and injustice of domestic violence; making children one of the most vulnerable groups in society (other groups being the elderly and animals).

I am here to tell you that survivors of abuse are not forlorn. I learned very early on that I needed to take care of myself and that no one would take on that task. I always knew my true worth, even in the midst of severe abuse which should have convinced me of the opposite. I learned early on that the definition of family isn’t biological relatives, but people who are worth of your love, time and energy and that are there for you no matter what. Throughout the years, I learned that it is totally OK to let go of some family-friends when I wanted and needed to.

Mental strength was pretty much a miracle in the midst of the storm. As TEDxAmsterdamWomen’s representative Marian Spier once told me: “you are a miracle” (I recently expressed my gratitude to her, because years ago, I didn’t fully comprehend the grandeur of that statement). After the storm, it can be maintained through mind building, which is fascinating. Intellectual intelligence is genetics, thanks to my father. Combined, you could call it a highly intelligent cocktail.

Never do anything with their history

In the second quarter of 2021, a Dutch television production will be broadcasted on my story and my book called Exodus uit de vuurtoren, Schaduw achter en gezicht naar de zon, translated: Exodus from the lighthouse, Shadow behind and face towards the sun. Details will be made public later on. Sometime after filming, the producer sent me the link to a Netflix production called The trials of Gabriel Fernandez. He already watched Unorthodox and One of Us. He said: “this series of six episodes made me understand what you have been through even better. I never want to watch it again, but I am glad that I did. I think everyone should watch it”. Of course I did.

Unfortunately, there are too many Gabriel Fernandez’ all over the world, whose lives are brutally taken, destroyed, shaped or worked against, who will never have a face and receive the public recognition they deserve. The majority of the Gabriel Fernandez’ who do survive, will heal and move on, but will never do anything with their history, let alone speak out in public – all because of stigma. They feel that speaking out wouldn’t just influence their lives, but also entire family structures throughout many generations and other people involved. Or, speaking out would get extinguished by third parties with certain interests.

Comparing Gabriel Fernandez to me

To some extent, I am Gabriel Fernandez:

Make sure to watch the series on Netflix sometime when you can, to not be a bystander but a participator in life and to take a stand against institutionalized failure. Let’s minimalize risks and act for those who need us now.