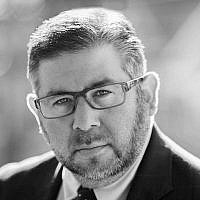 The Blogs
Asaf Romirowsky
Apply for a Blog
Advertisement
Please note that the posts on The Blogs are contributed by third parties. The opinions, facts and any media content in them are presented solely by the authors, and neither The Times of Israel nor its partners assume any responsibility for them. Please contact us in case of abuse. In case of abuse,
Report this post.

Combating BDS requires a deep understanding of the movement, its funding, organizational architecture, and the plethora of Jewish and Muslim NGOs who fund-raise and train on its behalf, for example, the Jewish Voice for Peace (JVP) and the American Friends Service Committee (AFSC).

There is finally movement in the anti-BDS camp to break down some of the basic elements that need to be addressed and educate the still scattered opposition. During the past few months two conferences took place with the goal of looking at the heart of the campus – students and faculty. The StandWithUS (SWU) conference in Los Angeles focused largely on students and what they face in the fight against BDS. This is a major concern to parents and the mainstream Jewish Community, as we seek to empower and educate students on the responsibilities of free speech and the facts pertaining to the Arab-Israeli conflict.

But a greater concern that often fails to receive attention are professors, who represent a permanent fixture in any university. A symposium at the University of Baltimore School of Law entitled Academic Freedom at Risk: the Boycott, Divestment and Sanctions Movement Against Israel featuring a variety of experts, including retired Harvard Law School professor Alan Dershowitz who delivered the keynote address. With regard to faculty who rarely speak out against the BDS movement Dershowitz commented that he has “never met a less courageous group of people than tenured professors…who don’t have the guts to stand up to the loud-mouth people on the hard left who try to create an atmosphere of political correctness on our campus.”

It was precisely for that reason that the conference was organized by Scholars for Peace in the Middle East (SPME), the American Association of Jewish Lawyers and Jurists (AAJLJ), and the University of Baltimore Law School, with the goal of highlighting the role of faculty. SPME is the largest faculty grassroots group, with approximately 40,000 members around the world and all parts of the political spectrum, who are committed to combating BDS. The AAJLJ has taken a leading role in defending Israel in courtrooms and in legal forums.

At the conference Professor Jeffrey Herf of the University of Maryland described the underhanded means in which BDS was pushed in the American Historical Association and how it was eventually defeated. Dr. Alex Joffe detailed the structure of the BDS movement, emphasizing its connections to the Muslim Brotherhood and to far left organizations, including Jewish ones. Finally, Professor Richard Landes contextualized BDS as a theology where Israel has been given the role of the devil.

All of this, gave a diverse audience that included students and professors, Jews and non-Jews an inside look at one of growing problems we face in academe today.

Most academics who support BDS fall into the category of scholar-activists, a phenomena that has been growing in North America since the 1960’s, where individuals focus more on political theater rather than enduring scholarship. Academic boycotters have increasingly retreated away from serious engagement of issues surrounding the Arab-Israeli conflict and replaced it with anti-intellectual demonology of Israel and its supporters.

Navigating a university is not a simple task. Administrators and trustees are self-interested stakeholders devoted to seeing that peace and quiet prevail at any institution. But faculty and students are the heart of the university. Only a small minority of both is implacably opposed to the existence of Israel, perhaps ten percent of less. But this minority successfully shapes the larger university environment, by playing to politically correct views on racism and violence, hijacking other causes such as minority rights and fossil fuels, and cowing its opponents with harassment and intimidation, false claims of persecution, and undertones of violence.

Winning the BDS war requires a playbook that understands the opposing players and their respective strengthen and weaknesses. We know that the BDS movement for now is only tacitly endorsed by many departments and professors, given a platform to single out Israel as absolutely the worst society on Earth in the name of “free speech” and political correctness, more than university acquiescence in the goal of dismantling Israel. With a more unified front, which engages both students and professors, pro-peace forces could help recapture the narrative that is slowly getting lost in the sea of propaganda.