It seemed like a good idea for a couple of Australian musicians. They would take their aliya dream a step forward with a visit to Israel that combined a number of gigs and music projects with visits to the prospective towns they were considering as their future home. Surely July in Israel would be more a pleasant experience than the cold Melbourne winter. What could possibly go wrong?

Melbourne-born Moshe Hendel Feiglin (disclaimer: my nephew) and Zev Gelber head up Feter Hendel. Their brand of Jewish spiritual folk music, rich with strings and soul, has seen them rise the ranks here and abroad. With Israel deep in their hearts, this trip was an opportunity to connect more closely with the land, and through the video project “City of David“, use their music to tell a more positive story about Jerusalem to the world.

Accompanied by band member Alex Burkoy, their tour began with shows in the Old City, Pardes Hanna-Karkur and Safed. From there, the team booked 7th-8th July for filming, seeking to capture a typical day in the life of Jerusalem. But then on the 6th of July, the rockets started falling.

They came to Israel to play some music and bring back some inspiration, and ended up in a war. Was God trying to tell them something? This tested the resolve of two young men – how prepared were they to uproot their comfortable lives in suburban Melbourne?

They pressed ahead with the filming the video in spite of the regular sirens and intense feelings around them. And as they captured the wonderful images of Jerusalem – the morning time-lapse of the Western Wall and the harpist in an alcove, the shouk in the Armenian Quarter in the morning, and Mahane Yehuda in the afternoon, the wonderful juxtaposition of old and new – any despair or doubt they may have felt was replaced with feelings of destiny. They looked around them and saw optimism and hope despite the danger of the rockets. And that drew them even closer, with a need to be a part of it, not just an observer from afar and a passing tourist. 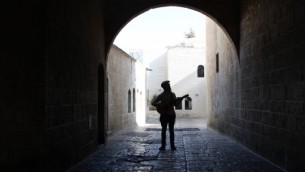 Their choice of song for the video is a story unto itself: an obscure bootleg of the great Shlomo Carlebach singing what sounds like a gospel song, but despite an extensive search, has not been identified. The video opens with Carlebach’s own introduction, half apologizing to the crowd for singing a song in English.

Feiglin himself flashes in and out of the video, which is less about him and his fellow musicians, and more a celebration of a city that is so central to Jewish life and culture.

After a long and dark exile, we have indeed returned to the City of David. We have brought vibrant and diverse Jewish life and melded it with the rich and layered history of a magnificent city that has stood the test of time.

City of David is a revivalist cover song of a cover song – an appropriate tribute to a city that has layers over layers spanning thousands of years, and that also been revived from its slumber. A city that has endured so much, and despite that, as city whose people remain as robust and strident and hopeful as ever.

About the Author
David is a public speaker and author, an experienced technology entrepreneur, strategic thinker and advisor, family office principal, philanthropist and not-for-profit innovator. Based in Melbourne Australia, David consults on high net worth family and business issues helping people establish succession plans, overcome family conflict, and find better work/life balance. He is an adjunct industry fellow at Swinburne University, with a focus on entrepreneurship. David incorporates his diverse background into his thinking and speaking, which cuts across succession planning, wealth transition, legacy, Jewish identity and continuity. He is passionate about leadership, good governance, and sports. David is married with five children.
Comments