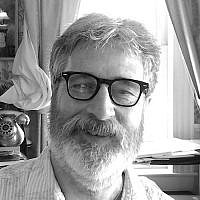 Besada, anee lo Yudee,  aval  Notsree. It embarrasses me not to be a Jew, in the traditional sense, as “I feel Jewish.” “Anee goy, aval nefesh  shelle Yudee.”  After admitting that to a beautiful Israeli student at Smith College, she replied, “I’ve never heard anybody ever say that.”

Like so many other immigrants, my grandparents left the old world for the new world. Their Christian holidays were not truly observed.  In 1960, when I was six, my mother wouldn’t allow me to watch The Diary of Anne Frank on TV.  Those were my first imagined clues.

Our family dentist was Dr. Leonard Friedman, a WWII veteran. I recall Carolyn, that’s me mum telling little me that some of the towns-people wouldn’t see him for their dental needs. Why, Mom? “Because he’s Jewish.”  He was just a cool guy with a winning personality topped off with tight-curly golden hair. The Friedmans, family friends, sent their two children, Jeff and Kathy, older than I, to private schools. His waiting room was decorated with abstract art. Happy harlequin clowns dancing be-neath a happy primal-colored sky, or was that a big-top? He told me I was a Spartan for declining novocaine and laughing gas. That was just about the time I saw 300 Spartans starring Richard Eagan down at the Savoy Theatre. In ten years that family movie house went feral with forbidden lust and turned X-rated.  It soon succumbed to fire one hot summer night in 1973. The next morning there was an actual town flood. Non-lethal, but expensive and messy. Those two weird events seemed…biblical. Somebody remarked that it was probably “Jewish lightning.” An antisemitic trope for insurance fraud, never mind that the owner was a gentile.

As a high school sophomore, I sat at the far end of the bench for the Northfield Marauders varsity basketball team.  Stepping off the big yellow school bus at Rutland High School, my eyes responded with metaphysical immediacy to the reform synagogue across the street. Now it’s the Jewish Center of Rutland.  My soul wanted in that holy tabernacle. Because Israel was in there.  But I was merely a teen in town to play basketball, or in my case, watch from the hard pine.

Just a few hours later, we would lose to Bradford 67-57 in the 1970 quarter-finals, and after the season’s last intimate shower, we shuffled back to the bus. But I wandered away from team goyim and headed for the shul. Trying the locked doors, it was a Thursday.  What was that ancient and exotic language etched across the front entrance? Evreet! I didn’t understand any Hebrew then, but it was a revelatory experience for a curious teen.

“What are you doing over there, Pete?” shouted Coach Dilena, breaking that holy moment. “We gotta go!” I walked back with gym bag in hand,  different. Well, at 13,  it wasn’t anything near a bar mitzvah, but it would have to do.

According to a 1994 computer search at The Diaspora Museum, my ancestors could very well have been Sephardim.  It may sound insipid, silly, or even vicarious, but since standing in the shadow of that shul, I have always “felt Jewish.”  A wanna-be?  That’s the gossip back in nosey Northfield, where I  care-take for my 98-year-old  mum. What can you expect from the same village where some bad apples still practiced an ancient curse?  A prophet, it is written,  is never recognized in his hometown. I’m certainly no prophet but maybe you get the point.

I’ve harbored aspirations to live in Israel, but have always returned to America after half a year.  Frankly, I wimped out as my finances withered, and hard reality overtook ethereal romance. It was just so much easier to live in fat and happy America. Been kicking my tuchus since 2000. I need to experience  Israel for, at least, a full year.  And, hopefully, stay. After-all, the safest place in the world is inside an IDF base.

I believe it may become an evil nocturne for Jews and Christians over here now that Trump has lost the election.  Devious forces may see Kamala Harris succeed the weakening president-elect.  She, Obama, Bernie, Omar, Tlaib, and OAC are enemies of Israel. They will be whispering through Biden’s left ear. His right ear is stone deaf. Biden will do and say whatever his puppeteers ask, and belief in The Living G-d of Israel could soon become socio-political anathema. After-all, centrist Judeo-Christian belief systems may have something to do with holding America back from becoming The United Socialist States of America. But what does a wanna-be know?