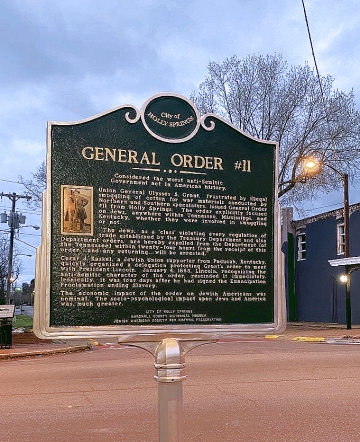 March 18, 2021, a new historical marker, General Order #11, was completed and placed by the Jewish American Society for Historic Preservation in Holly Springs, Ms., with support from the City and the Marshall County Historical Society Museum.

One hundred and fifty-nine years after the Order was issued, it still raises hackles.

Union General Ulysses S. Grant, frustrated by the illegal smuggling of cotton for war materials conducted by Northern and Southern speculators, issued General Order #11 from Holly Springs (Ms.). The Order explicitly focused on Jews, anywhere within Tennessee, Mississippi, and Kentucky, whether they were involved in smuggling or not.

“The Jews, as a ‘class’ violating every regulation of trade established by the Treasury Department and also Department orders, are hereby expelled from the Department [of the Tennessee] within twenty-four hours from the receipt of this Order…and any returning…will be arrested.”

Cesar J. Kaskel, a Jewish Union supporter from Paducah, Kentucky, quickly organized a delegation protesting Grant’s Order to meet with President Lincoln. January 4, 1863, Lincoln, recognizing the anti-Semitic character of the Order, rescinded it immediately. Ironically, it was four days after he had signed the Emancipation Proclamation ending Slavery.

The economic impact of the Order on Jewish Americans was nominal. The socio-psychological impact upon Jews and America was much greater.”

Jews, all Jews, guilty, innocent, young, old, Union soldiers, Confederates, for the crime of being Jews, were arbitrarily defined as enemies of the Union government and ordered banished.

For a horrifying short period, Jewish group identity and Jewish group retribution became one. No other broad-brushed strokes were issued against any other group other than Jews.

Just a few months earlier, President Lincoln had to contend with another Jewish political crisis.  Until Lincoln intervened, Jews serving in Jewish regiments were not permitted to have Jewish Chaplains. Only Christians could be Army chaplains.

He was confronted by General Grant’s Order. He listened intently and understood the deeper meaning.

The armies of the North were fighting to end human Slavery. Lincoln could not lead a government intent on ending Slavery while condoning the opposite for another denigrated group, Jews.

Immediately, Lincoln ordered General Order #11 canceled. The countermanding Order took time to reach Grant and even longer to stop the vicious anti-Semitic sentiments it was unleashing.

Before Lincoln’s response had reached the front, small numbers of Jews within Union control were being rounded up, packed in trains for exile. They were denied the most basic rights guaranteed by the Constitution. They could not even sell any of their property for a few pennies.

A Jew complained to the Military Officer, arresting him.

“Gentleman.—”I should like to know the cause of our detention.”
Colonel.—”I do not feel inclined to give any.—in about half an hour, you will leave for Cairo and Alton.”
Gentleman.—”Colonel, can I sell my horse and buggy?”
Colonel.—”No, sir. You have nothing to sell. You have to leave on the next train under guard.”

Our informant (next) asked Gen. Tuttle why he was expelled from the Department. The only reply was:

“Because you are Jews, and they are neither a benefit to the Union or Confederacy.”

“I can no longer bear the Taunts and malice of those to whom my religious opinions are known, brought on by the effect that that Order has instilled into their minds.”

A resolution condemning Grant’s Order against the Jews was defeated in the House of Representatives and the U.S. Senate.

Grant’s Order challenged Jewish assumptions about America was and the freedoms she claimed for all in the Constitution.

Isaac Leeser was a contemporary religious leader, Jewish scholar, and founder of the Jewish press, the Occident, and the American Jewish Advocate. He railed against Grant and the Order. Feb. 1863, he wrote in a long essay, the origin of Jewish persecution was because of their faith. Persecution was intolerance to a view other than the majority’s.

“But herein lies the difficulty: men are not always satisfied with carrying out their own ideas of propriety since they are frequently annoyed by what their neighbor thinks or does. They imagine that his principles are a libel on theirs; … and therefore they cannot rest while such a contradiction to their fancy is within their reach….They must meddle, they must be at mischief, they must show their superior wisdom and sanctity; and in short, they will contrive all possible devices to let their antagonist, as they regard the one who innocently differs from them, feel that he has offended those who cannot imagine that anything can be right which they do not understand, and of which they perhaps have never heard.”

If Social Media had existed in 1863, the morally superior Cancel Culture Mob would not rest until Grant’s head was taken.

Lincoln had a dilemma. Lincoln did not remove Grant.

Grant may not have been an angry anti-Semite but a reflection of his 19th-century attitude towards Jews. He was busy prosecuting a war he was not winning. He was angry that even his father was involved in the illicit Cotton Trade, and he lashed out without proper consideration.

Grant was Lincoln’s best General. By the end of the War, Grant proved himself as the General who defeated Robert E. Lee and ended Slavery.

If Cancel Culture was the law of the land, Grant would have been removed. Slavery might have remained the enduring reality.

In 1868, Grant was elected President of the United States. He never spoke of General Order #11 again. As President, Grant worked diligently, more than any President had ever done, to support and help American Jews at home and defend Jews abroad. At every opportunity, he worked to make amends, even becoming the first President ever to attend, with his entire Cabinet, the dedication of a Jewish House of Worship, Adas Israel in Washington, D.C.

Post Biden’s election, almost ½ of the country are considered denigrated, their freedom to speak their views, frequently denied.

Frederick Douglas, the famed former slave, and Black Abolitionist, said in 1860, “liberty is meaningless where the right to utter one’s thoughts and opinions has ceased to exist.”