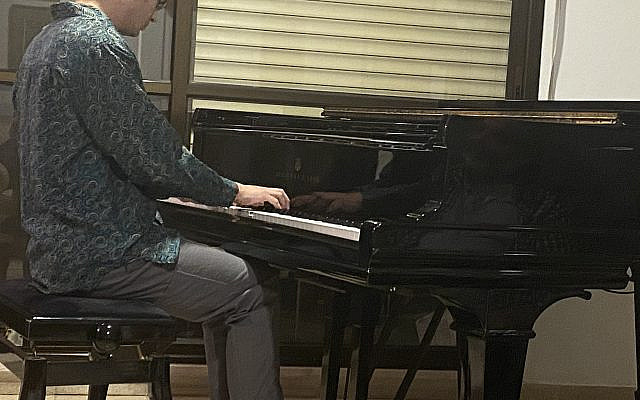 Ariel Lanyi at the piano. Photo by Yigal Shefer

When life seems bleak, music, literature and art provide us with consolation. Thus, it came about that we were able to attend two musical events in one week. What a feast! And what a difference.

The first was an intimate evening provided by our friends and neighbours whose son, Ariel Lanyi, is an internationally acclaimed musician based in London. As he was here on a family visit his parents kindly opened their house (and grand piano) for an evening of virtuoso playing. We were privileged to hear a performance of music by Saint-Saens and Schumann (the latter’s Symphonic Variations), sitting close to the pianist, able to enjoy his intricate fingerwork and brilliant musicianship, to experience the music at close quarters, and afterwards to rub elbows with this talented musician.

The second event was a performance of Offenbach’s opera, ‘Tales of Hoffman,’ given by the Tel Aviv Opera. Why do we go to the opera? In my case, at least, it’s to experience a night of music and drama, a show, a performance, in which consummate artists appear on stage, sing, act, sometimes even dance, and the sum total of talents provides an uplifting experience, sending me out into the night feeling inspired, entertained and perhaps even enlightened.

That, at least, is what I expected. The excitement of the occasion starts even before we enter the auditorium as we sit and enjoy a sandwich and coffee or tea in the café area inside the building. Around us are other opera-goers like ourselves, people of middle age and upwards, middle class, middling appearance, trying to look their best. Observing some of the overweight, ungainly women around us gives me food for thought. I suppose that once they, too, were young and pretty, and now (like me) they are faded and dumpy. But at least we can all still enjoy a night out listening to music and watching a show.

And so it begins. The hushed audience sits expectantly as the curtain goes up to reveal the enormous and intricate monochromatic set which consists of dozens of small showcases displaying a myriad of different objects. So far so good.

The orchestra strikes up and onto the stage surges a crowd of men dressed in black who begin to sing something tuneful and unfamiliar. The ‘Tales of Hoffman’ is based on the concept of the writer, A.T.E. Hoffman, portrayed as a frustrated poet unable to write and constantly falling in love with one or another object of his passion. Admittedly, there’s not much of a narrative flow there, but there is some good music from time to time (the coloratura singing of the mechanical doll, Olympia, in the first act, the Barcarolle at the beginning of the third act, and other pieces, whether choral or solo), but in principle there is scope for interest and enjoyment.

At the back of the complex stage set is inset a rotating room representing Hoffman’s study, and in which the poor principal singer has to sing while being tossed to and fro as it moves. In the second act this becomes a rotating turntable representing a record (‘His Master’s Voice’), and in the third act this is a roulette wheel. A very clever and impressive idea, both in conception and in execution.

Having all the characters, including the women, dressed alike, and all in black, did not help to distinguish between them, and the general idea behind the opera is too abstract and obscure to enable one to follow what plot there is and find it an enjoyable experience.

So by the end of the evening (the performance lasted three hours with two intermissions) I was too exhausted and almost annoyed to find anything positive to say about it. The designer, Stefano Poda, is a world-renowned artist who dictates choreography, costumes, set and movement. My assessment of the performance I saw last week is that his concept is gloomy and depressing. I’m not sure that Offenbach would have approved. I certainly didn’t.