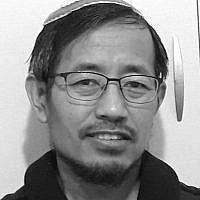 The Blogs
Yokhanan Phaltual
Apply for a Blog
Please note that the posts on The Blogs are contributed by third parties. The opinions, facts and any media content in them are presented solely by the authors, and neither The Times of Israel nor its partners assume any responsibility for them. Please contact us in case of abuse. In case of abuse,
Report this post. 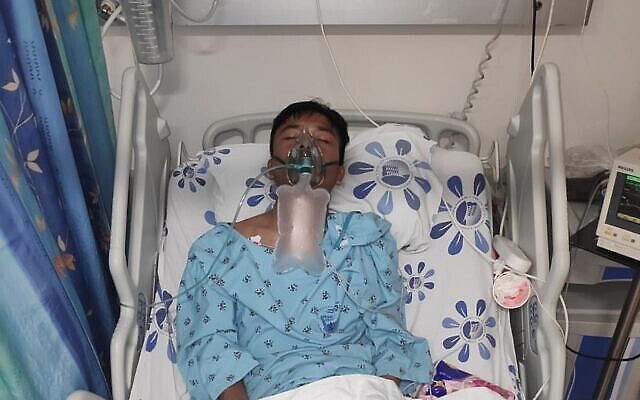 Am-Shalem Singson, 28, a member of the Bnei Menashe Jewish community who made aliya from Manipur, India, in 2017, is hospitalized after he was attacked on March 14, 2020, by two men. (Courtesy Shavei Israel)

Am-Shalem Singson, 28, has lived in Tiberias for the past two years after making aliyah from the northeastern state of Manipur in India in 2017 with his widowed mother, Bat-El Singson and three older brothers. Am-Shalem is a young religious Zionist member of the Bnei Menashe community who studies at the Hesder Yeshiva in Maalot in preparation for military service in the Israel Defense Forces.

On Saturday night, Am-Shalem was on his way to a friend’s house in downtown Tiberias. Singson said he was walking past two men on the street when one of them looked at him and yelled “Corona- corona,” and “Chinese.”

“I told both of the attackers that I was not even Chinese, but rather a Jew from the Bnei Menashe community, not that there is any justification for attacking a Chinese guy or anybody else,” Singson said from his hospital bed. “But they were totally crazed and kicked me hard while yelling, ‘Corona! Corona!’”

He suffered severe injuries to his chest and lungs and underwent minor surgery. He is convalescing at Poriya Hospital in Tiberias and is in stable condition.

This is not the first time racism has erupted in response to the global coronavirus pandemic. Since the outbreak of the virus, which was first reported by the Chinese government in Wuhan on December 31 to the World Health Organization, several accounts of racism and xenophobia related to the frightening COVID-19 disease have been documented in social media around the world. The attack on Am-Shalem was yet another one of these hate crimes.

I and the members of my entire community were horrified to hear about the incident. Since the beginning of the coronavirus outbreak, many Bnei Menashe community members across the country in Israel have described a rising and uncomfortable level of prejudice and racism against them. The racist assault in Tiberias is a wake-up call for the almost 5,000-member Bnei Menashe community in Israel.

Tiberias police officials say they are still working to apprehend the attackers and municipal officials strongly condemned the crime and pledged to take steps to prevent such incidents from happening again. But Many Bnei Menashe who once thought Israel wasn’t racist, and considered themselves to be part of a single Jewish race and nation, are now having second thoughts. The attack has sparked a welcome conversation among the Bnei Menashe about forming a national organization aimed at providing the community with a platform to redress our grievances and find ways to tackle our social problems.

For the Bnei Menashe, settling into our new country poses challenges that are common to migrants throughout the world. We are dispersed in small clusters throughout different regions, living as part of religiously observant communities in Sderot, Nitzan, Kiryat Arba, Ofra, Bet El, Beit Shean, Tiberias, Migdal HaEmek, Safed, Kiryat Shmona, Acco, Nesher and Maalot. Spreading our community has meant we are not living isolated from Israeli society. And Israel does provide a range of services to smooth the transition and help us adapt to our new conditions. But fitting in is still an uphill battle.

Of course we face language barriers, with housing and jobs a primary concern. But even larger than these practical considerations is the difficulty of coping with cultural differences — a problem that, it should be said, goes both ways, with misunderstandings by new olim as well as the people with whom we interact. We believe it is important for us to accept the values of others, which is something we cannot control. Accepting different values doesn’t mean the Bnei Menashe have to adopt the culture of other communities as our own, but that we need to learn to respect the culture of others.

Coming from India, a land rich in diversity and equality, the Bnei Menashe never felt the sting of racism. We are not schooled in coping with ethnic prejudice. So the incident in Tiberias was a sad chapter for every one of us. Just as our country Israel stands in the forefront of the global fight against racism, so will the Bnei Menashe fight against this anti-social element until it is eradicated. But we cannot do it alone.

As our political leaders work to reduce the consequences to health of the deadly disease, we call on them to also address the related societal issue. Hopefully, we’ll soon overcome this physical virus, but the social virus is no less important. It too is a symptom of the pandemic, and if not taken care of and corrected, it will take a much longer time to heal.