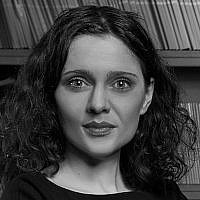 The Blogs
Aleksandra Gliszczynska-Grabias
Apply for a Blog
Advertisement
Please note that the posts on The Blogs are contributed by third parties. The opinions, facts and any media content in them are presented solely by the authors, and neither The Times of Israel nor its partners assume any responsibility for them. Please contact us in case of abuse. In case of abuse,
Report this post.

Despite decades-long efforts to counteract anti-Jewish attitudes throughout Europe and elsewhere in the world, Jews are still victims of antisemitic hatred and crime. According to a survey conducted by the EU Fundamental Rights Agency between 2013 and 2018 in 12 EU Member States, more than one-third of Jewish people living there said they were considering emigration because they no longer felt safe as Jews. At the same time, half of respondents stated that they at least sometimes wear, carry, or display religious items that could identify them as Jewish. As shockingly stated by one of the respondents from Sweden: “I never wear any Jewish symbols publicly and I always look over my shoulder when I attend a Jewish event”.

This is why the recent visit of an impressive number of 30 European lawyers, State Attorneys and Barristers from 24 European countries with special expertise in fighting antisemitism and hate crimes, organized by Israel’s Ministry of Foreign Affairs, is of crucial importance for the fight against anti-Jewish hatred and prejudice. This is the first time that a delegation on this level has come together in Israel to strengthen multilateral cooperation, share best practices and develop legal strategies to counter antisemitism, delegitimization and hate speech.

Antisemitism is of deep concern, given the growing numbers of antisemitic incidents in Europe across the spectrum. And while there are many firm statements from European politicians, leaders and decision-makers, as well as campaigns against these developments, including the 2021-2030 EU Strategy on combating antisemitism and fostering Jewish life, there are still wide gaps between, on one hand, the existing legislation and declared intentions of top actors, and their real enforcement in the physical realm as well as online.

In particular, recognizing anti-Zionism as a form of antisemitism remains a huge challenge. Even though it is being portrayed as a justified and „regular” form of political and social discourse, very often antizionism turns out to be just another form of the century-old stigmatization and denouncing of Jews. It is even more dangerous as it sometimes justifies the physical and verbal attacks on Jews and Jewish institutions, behind the condemnation of Israel’s policies coupled with a “critical perspective” on Israel’s creation and right to exist along the family of nations. Another reason of concern is the still remaining presence of the phenomenon of Holocaust denial and distortion disseminated in public and disguised as „historical disputes”.

While there are different strategies and tools for counteracting these negative attitudes, the keys to counteracting antisemitism and hate crimes are the law and education. This strengthens the urgent need for developing a common language that will set the common ground and create the basis for effective action. For that the working definition of antisemitism introduced by IHRA is an important tool that helps imbue a common understanding of how complex antisemitism is.

Nowadays, most of the hatred is being distributed online with still not sufficient efforts by big tech to effectively implement optimal community standards. As history teaches us, eventually almost all hateful words turn into hateful deeds. This is why online hatred often leads to violence against vulnerable minorities “on the streets.” States and all other actors involved are under legal, political and moral obligation to prevent it.

Other challenges include the widespread online sale of inciting ads, and the sale of Nazi memorabilia, visuals glorifying Nazism online as well as insufficient training of online content editors on racism, antisemitism and hate speech, including nuances in various languages. Additionally, online Holocaust denial and distortion disseminated online needs to be tackled more effectively. The Covid-19 crisis has proven that it is possible for online platforms to use the policy of “verified content” or flag content intended to misinform. It seems there should also be a way to introduce the same techniques to identify the warning signs of Holocaust denial, that being one of the most disgraceful forms of antisemitism.

For all these reasons the delegation of lawyers came to Israel at an important time. Attacks on minorities are particularly strong in times of crisis and under populist rule. This could be observed during the Covid-19 pandemic when antisemitic conspiracy theories gained enormous popularity. This was also dramatically visible when Jews were attacked in various European cities during Israel’s operation in Gaza in 2021. The more unrest, the more political campaigns are intentionally using crisis to incite the majority against minority groups for political gains. Therefore, minorities need the protection of the law the most, with all its force. The Jews of Europe undoubtedly belong to this category.

The delegation of lawyers proves the commitment of European countries and Israel on the issue of counteracting antisemitism and other forms of hatred and prejudice and the trust European countries place in Israel’s ability to take a lead on this enormous task. This stems from a deep belief that the fight against antisemitism, racism, and hate speech can only be led together in a multilateral approach. A global phenomenon needs a global response. No country alone will be able to effectively challenge what’s often called “the oldest hatred.” Most European countries have enacted important legislation and it is vital to learn from each other and establish best practices. The delegation closes a gap for a permanent legal platform to combat antisemitism and brings together the best experts in the field, truly committed to the common cause of counteracting hatred. Hopefully, this delegation can become a permanent network that meets annually to demonstrate willingness, come up with ideas and take action aimed at fighting antisemitism with the tools of law.

About the Author
Aleksandra Gliszczyńska-Grabias, Assistant Professor of International Human Rights Law, Member of the Governors Board of the International Association of Jewish Lawyers and Jurists.