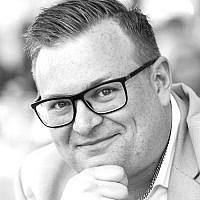 The Blogs
Michael Burich
Apply for a Blog
Please note that the posts on The Blogs are contributed by third parties. The opinions, facts and any media content in them are presented solely by the authors, and neither The Times of Israel nor its partners assume any responsibility for them. Please contact us in case of abuse. In case of abuse,
Report this post. 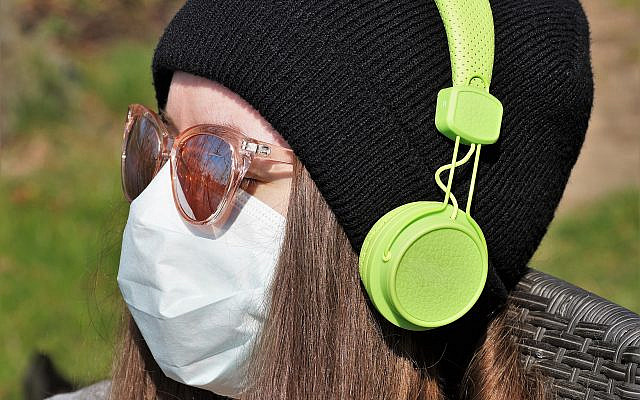 A woman wearing a protective mask with headphones (Pixaby/ivabalk)

Unemployment, disease, social unrest, isolation, loss of trust in government and authorities. Any one of these would normally be sufficient to set off mental discomfort. But in 2020, we are experiencing them all at once – inexorably, relentlessly, and with no end in sight. If anything, the forecast is for things to get worse before they get better.

The human psyche has taken a major hit this year; clinical depression is way up, and an increase in suicides is likely to follow. The unrelenting flow of bad news – coupled with the lockdowns, quarantines, and requirements to socially distance – has put many people on a farther edge than they have ever been.

Perhaps most concerning is that the depression – or at least deep-felt anxiety and blues – many of us are experiencing – could contribute to making us even sicker, if we are hit with Covid-19. A British study found a solid connection between illness and depression, meaning that what we fear could make us sick might actually make us even sicker.

Even those who have managed to retain a semblance of sanity during these times are suffering from anxiety, insomnia, and other non-clinical but still serious maladies, with the National Institutes of Health calling the effect of Covid-19 on insomnia “acute.”

And, to top it all off, scientific studies show that increased stress – leading to an increase in cortisol and pro-inflammatory cytokines (both also by-products of insomnia) – can harm the immune system, making individuals less able to fight off infection. Just when we need it most, our immune system is being compromised by the circumstances we find ourselves facing.

There’s no doubt that many people are hurting these days. Even those of us who have been lucky enough to remain healthy and employed all know of people who are either, or neither. Those directly affected by the coronavirus crisis need some mental relief, as do those not directly affected – the former to help them face an uncertain future, and the latter to cope with the uncertain prospects they, too, face.

The need for mental support has led to a significant increase in the number of people seeking to learn meditation and mindfulness techniques. After the first month of widespread quarantine in the US, there was a 25% increase in the number of downloads of meditation and mindfulness apps – and engagement with them nearly doubled among many users. Once seen by many people as “new age nonsense,” the idea of meditation as a way of coping with the mental fallout of Covid-19 has become much more popular.

While many people take up meditation for stress because they report it makes them feel more relaxed, there is scientific evidence to back up the notion that mindful meditation helps with stress. A 2014 study reviewing 47 different trials concluded that there was quantifiable evidence that “mindfulness meditation programs had moderate evidence of improved anxiety.”

But old habits die hard, and if you’re not used to meditating, getting started can be a challenge; it’s difficult to set aside day to day worries and concentrate on meditation techniques. But there’s a mindfulness shortcut that requires no further effort than putting on a pair of good headphones – binaural beats, a technique that could help many people deal with the many mental challenges we all face today.

Binaural beats could help millions who have never tried meditation – and are not inclined to start learning how to meditate – to build a mindfulness program that will help them cope with the social and mental upheavals we are all going through.

The theory and science of binaural beats has been around for over a century and a half. A binaural beat is created when a tone (frequency) is played in the left ear, and a slightly modified frequency is played in the right ear. The tones stimulate the brain to produce a third frequency that integrates them both together, called a binaural beat, which creates new synaptic connections between different regions of the brain.

Although it’s not a new technology, it has only been in recent years that there have been objective scientific studies on the effect binaural beats have on the brain; on the other hand, research on the effect sounds and music have on the brain is also a relatively new field. Absorbed in a binaural beat session, users report feeling more relaxed, stimulated, and able to cope with stress, insomnia, tension, and other issues.

Much of what we think we know about the effect of frequencies on the brain has been based on anecdotal and correlative experiences. With that, binaural beats have proven popular with the public, with millions downloading binaural beat apps and sounds every year. And if they can help people develop a mindfulness and meditation program to cope with the mental stresses they face these days, there’s no reason not to try them.

And as a “shortcut” to meditation and mindfulness, binaural beats can help users not only mentally – but even physically. Research clearly shows that decreasing stress levels can boost the effectiveness of the body’s immune system, thus making it easier for the body to cope with an attack.

If we had described what we are facing now to our 2019 selves, it would have sounded like an unimaginable nightmare. Unfortunately, the reality we face is all too real – and according to many experts, that reality is not going to change anytime soon – and the wrenching changes wrought by coronavirus are likely to echo through society for many years to come

Of course, anything can happen; sooner or later, scientists will come up with a vaccine (we hope) for COVID-19, or at least an effective, solid early detection and treatment protocol. Until then, expect stress levels due to bad news – personal and societal – to remain at high levels. The time to adopt a mindfulness program was yesterday – and binaural beats can be a good way to encourage people to adopt that program.

About the Author
Michael Burich, the Co-Founder and COO of Israeli-Estonian startup Synctuition, is an entrepreneur and business owner with more than 15 years of experience in a variety of industries, including entertainment, fintech, hospitality, asset management, and visual media.
Related Topics
Related Posts
Comments