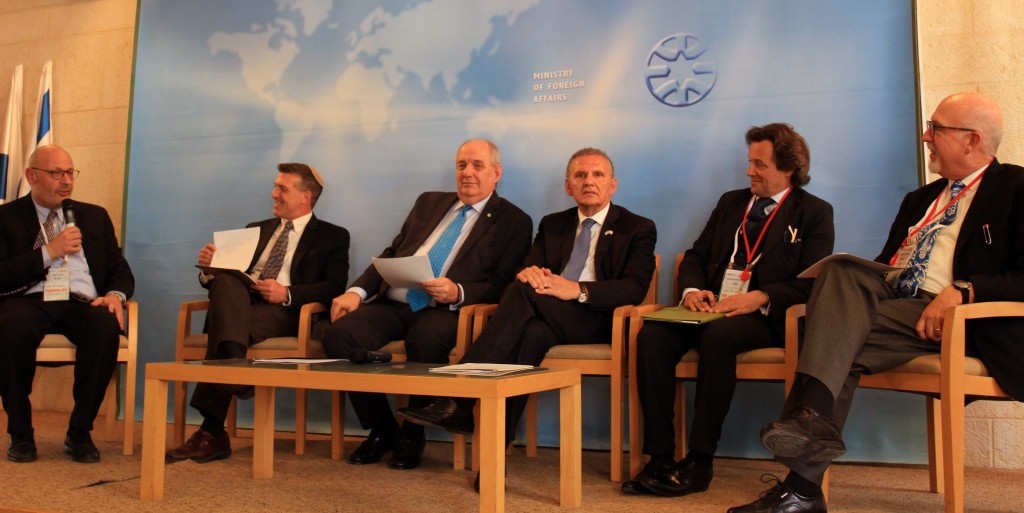 More than 70 representatives from 31 countries gathered in Jerusalem March 6-8, 2017 for a strategic international conference on Homeland-Diaspora relations. Hosted by Israel’s Jewish Agency, in partnership with the Knesset and Israel’s Ministry of Foreign Affairs, the participants included ministers, deputy ministers, ambassadors, and senior parliamentarians from around the world. They looked for ways to exchange ideas and information, solve problems, provide solutions, and partner together to help their diaspora communities strengthen ties with their individual homelands.

In this era of globalization, where personal identity has become less important than the collective whole, diaspora populations have suffered. Some of the participants in this conference talked of transforming their communities living abroad into an integral part of their home countries, in order to help preserve identity. This means accepting mutual responsibility for the problems that exist today.

Israeli Deputy Minister of Foreign Affairs (MFA), Tzipi Hotovely, spoke to the international delegates at the conference about the Israeli model. She recalled that in Israel’s history, the first Prime Minister (David Ben-Gurion) said in the Declaration of Independence that Israel will be the home of every Jew in the world. “Jews from around the world – from Yemen; from Ethiopia; from Russia; from Georgia where my parents were born; from the United States; from Australia; from South Africa — Jews came to build their homeland.”

After all these efforts, Hotovely surmised there are about 6.2 million Jews living in Israel, but there are still about 10 million who are living abroad. The most concentrated groups of Jewish people live in the United States.

Hotovely also talked about the big success of the Birthright program that has brought more than half a million young people on tour to Israel during the last several years. It was a project that was the dream of Israeli leader, Yossi Beilin. It took 10 years to launch, but was eventually adopted by three groups:  the government of Israel; the Jewish Agency; and philanthropists.

According to Hotovely, “They are all together saying we care about the future of diaspora children.”

Today, the MFA is looking for a new project to draw young Jews to their homeland. They want to reach young people in a deeper way through stronger connections. One interesting aspect is language. Youth coming to live in Israel adapt to the Hebrew language easily, unlike their parents and grandparents who seem to retain the language of their old countries. As a result, Israel has made an effort to connect the Jewish State to global Jewish communities through Hebrew studies taking place in almost every Jewish day school in the Diaspora.

Hotovely talked about the need to speak about identity and values to young people. Today, in America, for example, Tikkun Olam is popular – a way of creating solutions to the problems of the world. The fact that Tikkun Olam has become a universal terminology has made American Jews proud that it originated from Jewish sources.

“They were looking at Jewish values, about how to put meaning into their lives; about spiritual values.”

So, where are diaspora relations heading?  The answer, says Hotovely, has to do with problems regarding identity.

“The world is a global village and it is something that many people feel is erasing identities. People don’t want their identity erased.”

Hotovely encouraged conference participants not to give up on their dreams and visions; but, to find the right formula. Birthright didn’t include Israeli interactive methods when the program first began. Yet, after a while, organizers added visits with Israel soldiers and Israeli students. This improved the Diaspora youth connection to Israelis. It was a formula that eventually worked.

“Today, we know that people are looking for connection. People are looking for similar agenda issues. This is why the Start-Up Nation issue is such an important issue to the way we come to Jewish communities, because we speak of the strength of Israel as an innovative society.”

Hotovely added that this creates a strong bonding while preserving identity, which Israel has been encouraging in its interactions with other countries.

The uniqueness of Israel and its own diaspora communities draws leaders from around the world to view the successes and failures of the Jewish State.

Akiva Tor, who heads up the Bureau for World Jewish Affairs and World Religions at the MFA, acknowledged that the Jewish People are an ancient people, but with a nation state that is one of the youngest in the international community. “The Jewish People have a deep global consciousness. They are all over the world. The Jews are on every continent and speak almost every language. But, they are only sovereign as a people here.”

While global Jewish communities require the need of the protection of a nation state, many Jews choose to keep living in the Diaspora. However, according to Tor, “Israel on the one hand is the only Jewish nation state country, but at the same time, we are also the largest Jewish community. We are a country with nation state needs, and also global challenges that other states don’t have.”

Much of this success has to do with Israel’s founding, according to Tor. “Israel was founded to be a refuge and a home and a nation state for Jews everywhere. And, therefore, in our founding DNA, we feel a deep responsibility towards the Jewish communities. They, too, have helped us.”

But, Tor also spoke of the problem of maintaining Jewish identity in a globalizing world. For example, today, in the United States where the majority of Jews outside of Israel live, more than 70% marry non-Jews.

“We are worried that their children will not feel Jewish enough to feel a connection with Judaism and Israel.”

During the conference in Jerusalem, there was a first-of-its kind trilateral meeting on diaspora policies held between Israel, Greece, and Cyprus. The discussions established a formal dialogue marking the on-going cooperation and friendship between representatives of the three nations, which officially began in 2016.

Israel’s special relationship with its own diaspora communities, along with its trilateral agreement with Greece and Cyprus may serve as a common denominator for other countries who are looking to join forces. The three countries are working on unity, education and defense relations.

Terens – Nikolaos Quick, Greek Deputy Minister of Foreign Affairs, emphasized the point that the three nations are examples of working democracies. “It is a partnership that will continue towards peace and stability in the region, and you know that it is very much needed in these days.”

Photis Photiou, Commissioner to the Presidency for Humanitarian Affairs and Overseas Cypriots, spoke about the challenges his country continues to face. “The vision is to unite Cyprus. To achieve this, we need the cooperation of Turkey, and so far there is no intention. But, we will continue working on this. If we want to create stability and peace in the region, we also need a united Cyprus.”

In a panel at Israel’s Foreign Ministry, hosted by Ambassador Joel Lion, representatives from Israel, Greece, Cyprus, Italy, and Mexico shared about their individual diaspora issues.

Terens – Nikolaos Quick repeated the concerns of others at the conference. “We don’t take seriously that, with globalization, we are losing our national identity.”

One of the ways Greece is preserving identity is in the way language and religion play an important part in community networks outside of Greece. Quick explained that Greece is assisting with the education of 4th and 5th generations, teaching them the Greek language.

“We believe that these are the basic elements linking the Greek abroad with the mother country.”

Furthermore, working with the Cypriots and Israelis on joint ventures, to help their collective diaspora populations, has created a synergy for Greece.

“Our diaspora is well organized, especially our youth. We are trying, now, to put this important factor of the diaspora under the trilateral partnership of the three countries. We believe that through joint programs, not only in our countries, but abroad, we can achieve our goals.”

Photis Photiou agreed the prospects are very good. “I think it will be a success story. We want to go on where these trilateral diaspora relations are concerned.”

The United States is encouraging the success of the trilateral cooperation, helping at decision-making centers. The uniqueness of this trilateral partnership is becoming a model for other countries around the world, especially for those who were represented this week at the Homeland-Diaspora Relations conference in Jerusalem.

About the Author
Carrie Hart is a news analyst reporting on political, diplomatic, military and social issues as they relate to Israel, the Middle East, and the international community.
Comments