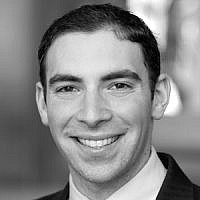 The Blogs
Adam Baldachin
Apply for a Blog
Advertisement
Please note that the posts on The Blogs are contributed by third parties. The opinions, facts and any media content in them are presented solely by the authors, and neither The Times of Israel nor its partners assume any responsibility for them. Please contact us in case of abuse. In case of abuse,
Report this post.

Each year on Passover, I get chills when we recount the plagues against Egypt: Blood, boils, hail, and death of first born children represent the stuff of horror films. And yet, the second plague tends to stand out for me. “The Nile shall swarm with frogs and they shall come up and enter your palace, your bedchamber, and your bed, the houses of your courtiers and your people, and your ovens and your kneading bowls” (Exodus 7:28). Frogs, although slimy, do not in my mind match the horror of other plagues. Some have argued that the numerical magnitude of the frogs was the power of the plague (Rashi, 11th century France) while others point to alternate interpretations of the animal; perhaps it was a beast-like creature that devoured humans whole! (Rabbeinu Bahya, 14th century Spain)

This year, however, I have been reflecting on a harrowing commentary by Abarbanel (15th century Portugal). He offers an interpretation of the plague that gives us insight into the suffering of the Egyptians and gives voice to the cry of the oppressed. Abarbanel focuses on the loud croaking of the frogs as the plague-like quality of the amphibian and explains that, when the Egyptians don’t repent for the sins they committed by enslaving the Israelites, God brings them kolanim, noisy creatures. The sound, he explains, is excruciating for the Egyptians to hear since it evokes the cries of the Israelite parents who were forced to throw their babies into the Nile. Previously, the parents’ screams in the ears of the killers of their children seemed to go unnoticed. The plague of frogs seeks to bring an acute sense of guilt to the Egyptians who are forced to hear the pain of those they oppressed.

Several chapters earlier, God heard the cries of the Hebrew slaves and decided to act. “God heard their groans, and God remembered God’s covenant with Abraham, Isaac, and Jacob” (Exodus 2:24). Pleas to end human suffering can bring about change, and the second plague was perhaps a chance for the Egyptians to hear the cries of fellow human beings and shake loose from their tyrannical ways. Yet the Torah ultimately juxtaposes God answering the call for help with the Egyptians ignoring it. Whereas God remembered his responsibility to those in need, the slaveholders had become desensitized to the plight of others.

Throughout our lives, we hear many cries, even when we may not have personally created the conditions for suffering. They are the cries of people who are poor and homeless, disabled and infirm, lonely and depressed. These voices may be so numerous that they form a cacophony, hard to hear but nonetheless constant. We may even begin to tire of those voices, using their ubiquity as an excuse not to act. There are many pulls to choose the complacency of the Egyptians over the compassion of God.

Yet this Passover season is giving me hope that, when many people raise their voices together, change can indeed happen. For years, my neighbors—the children and families in East Ramapo Central School District here in Rockland County, New York—have railed against deep injustices in the educational system. Why are there giant trash cans in hallways gathering rainwater from leaky roofs in our public schools? Why are parents waiting hours for the school board to complete their secret “executive sessions” to have their voices heard? Why is kindergarten only two hours a day, while the district sends millions to private schools and to lawyers who defend their decisions? This goes beyond simple funding constraints; the school board here, the majority of whom send their children to yeshivas, is actively deprioritizing the children attending public school.

These cries may now be making a dent. A report by the New York State Education Department officially found that the school board has mismanaged the district, disrespected parents and students, and appears to use power and resources to favor private schools over public schools. Legislation written by our local state representatives (A. 5355 / S. 3821) is now hoping to authorize the appointment of a state monitor in the school district to ensure that all children, private and public, are provided a sound education that will prepare them for their future as upstanding citizens of America. A monitor would bring transparency to the district and allow parents to trust that their children are receiving the best possible educational experience.

Growing numbers of Senators, Assembly Members, County legislators, Town Supervisors and Councils, Mayors, and leaders from across the state are lending their voices to support this oversight. Even Governor Cuomo said he would sign the bill if it reached his desk. And, during this month of Passover, you can, too. Please join me and Rockland Clergy for Social Justice on April 28th for our advocacy trip to Albany. Sign up at www.strongeastramapo.org/april28. Our goal is to convince lawmakers to pass A. 5355 S. 3821; and for our voices for justice and equity to be heard like the croaking of frogs. We will remind others of their responsibilities as guardians of the sacredness of public education until we cannot be ignored.

About the Author
Rabbi Adam Baldachin lives in Rockland County, NY and serves as rabbi of Montebello Jewish Center, a Conservative, egalitarian community. He is a founder of Rockland Clergy for Social Justice.
Comments